Wraps around the boat.

I finally got some work done on the boat today. I started preparations for fitting the wrap around panels to the boat. This would seem a relatively easy task and it normally would be, but I have not yet glued and glassed the side decks to the boat. I still have some work to do on the aft section of them to change them to my cabin design (they were kit cut to be walk through transoms). This means that I don’t have a stable platform to work on. I solved this by putting the cedar planks I have (I believe they would be used in the mast steps were I going with the traditional rig) that I have been using as scaffold, along the side deck spanning the bulkheads. Even if the side decks were glued in, not being attached to anything across the bulkhead span would mean they would snap the moment I put my weight on them, but once attached to the wrap around the girder effect takes over and they become solid platforms that you could jump on and they would not break.

I found some timber pieces and started to attach them around the cabin side opening to form a supporting beams for the wrap around to sit in (so as not to fall through the gap and break at a kerf) once the kerfed panel was put in place around the cabin. I discovered a problem once I started attaching the supports. The angle on the sides of bulkhead 5 match the cabin side angles of bulkhead 6, and I have slightly raised bulkhead 5 so these matching angles are more obvious, however the moment I put the braces on I could see that the wrap around, if it were to go where the roof edge and flat deck curve dictated it would go, would mean that the angle of the cabin side would change as it came forward from BH6. If this is ok then the angle on BH5 needed to be changed and a little bit trimmed from it, no big deal, 2 minutes work. But I am not sure yet if this is going to be ok. So I wont cut it until I am fitting the cabin sides and there is no other option. I am not sure if the cabin side can have a twist in it, even a small one. This potential problem halted me in my tracks for about an hour while I tried to figure out if it was going to be a major issue or not. I checked the other side to see if it had the same problem, because if it didn’t it meant the roof was twisted and attached out of square.

To my relief it has the same angle change (the exact same angle on each side, I checked it with an angle square. So it cant be that the roof is on wrong. If it is a major problem it has to be that the roof is made too small (it would need to be wider at the roof to make the angle needed to match BH6 or the front deck with the curved cut out for the cabin side base is not right. This can be cut easily but I could not see how this could be out. Anyway, I searched for a reason or a solution and decided I could not find one until I put the wrap around panel on.

Over the years some of the things that building has taught me is that the kit can be out a little but more importantly there is practically nothing that cant be (fairly easily) fixed. So I left that issue to be resolved later and moved on.

Next step was to brace the kerfed panel so that I could lift it onto the boat. Once a panel like this is kerfed it becomes fragile and unstable and extremely difficult to move without damage. The only option is to return the panel to a stiff state. I did this by sliding pine 4×2 planks under the panel then using 19mm mdf strips, screwing through the panel to connect it all so as to stop the panel flexing in either direction.

I then carried it over to the side of the boat (after moving the daggers) and carefully lifted it onto 44gallon drums I had placed there. From there I was able to slide it up the hull side and onto the deck. But unfortunately I was not the able to manoeuvre it the rest of the way into place. It was just too long and now that it had the bracing on, too heavy to get it into place from one end or the other on my own. I needed help to move it the last few inches into place. I couldn’t risk the panel falling down the curved deck sides and down onto the floor possibly destroying it, and I simply didn’t have the strength or purchase to move it from one end or the other into place.

Fortunately for me, Jo’s son Jake (who has helped a number of times over the years as he has grown so has the boat) helped me lift it these last few inches into place. With the panel in place all that remained was to remove the bracing to see how it fit. I already knew I would need to trim the roof about 20mm based on the measuring I had done. This new issue with the bulkhead angle (and as a result roof angle) also needed to be looked at but all of this will have to wait another day. 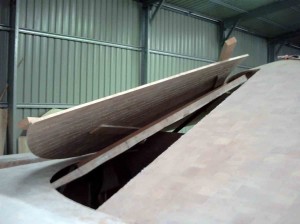 Tomorrow I will trim the various points where the roof is too big (the gap is too small) for the wrap around and dry fit it. That should dramatically change the look of the boat.