Wrap arounds ready to go on

I slept in today and missed the chance to work in the relative coolness of the morning. I got to the shed at 11am and it was already stinking hot so by 3.00pm I had gone home for a swim. I did manage to get the kerfs cut on the wrap around panels and potter around measuring things and generally wasting time because the heat up on the boat was such that I did not get the timber braces that will create a rest for the kerfed panel onto the boat. 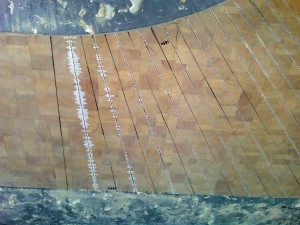 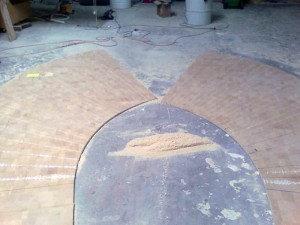 I was tempted to pick one of the panels up and try out the complete panel to see the shape but it is just too fragile. I will have to wait until it is on the boat. One thing finally occurred to me today after cutting many kerfs. I often get splinters but not always. And today I started at the top of one panel worked to the other end (we will call it the bottom) then from the bottom of the next back around to the top as per the pic above. And at the bottom few kerfs on both panels I got splinters but not on the cuts before or after, so it could not be the blade or the saw. I realised today that it is the grain of the glass. I had thought it might be the blades getting blunt or the battery failing thus lowering the rpm on the battery saw but today I used the electric knowing the battery one would not last for the entire job. I do recommend leaving the peel ply on when cutting kerfs in duflex, it does mean you have to remove a lot of thin strips of peel ply but it does reduce splintering.

I am very close to being able to fit the wrap around and it is only the first week of January so I am pretty sure I will get this thing done this month.