Behind the port daggerboard case is a grey water holding tank, about 75 litres. We have a gray holding tank in the starboard hull, a 50 litre but it is located between the toilet booth side and the inside hull side. So behind the daggerboard case in the starboard hull we have always planned to have a wine rack. Its pretty much dead space, too narrow to be much use for anything else.

From the back edge of the dagger case to the bulkhead the space is 680mm. The space is widest at the aft edge at about 180mm, at its narrowest where the rope slot protrudes, its about 120mm, and of course the space runs from the hull to the deck curve, which is about 2000mm. But for 900mm of that, it is below the height of the bench top directly behind it. So the space I have to use is about 180mm wide by about a meter high and 650mm deep.

I decided on 90mm storm water pipes and the 3 meter length was actually 3010mm. The extra 10mm allowed me to cut 5 x 600mm tubes from it losing the 10mm in the saw blade cuts (circular docking saw with 2mm blade, 4 cuts). I bought an extra meter and cut it down to 60omm. I also bought 6 end caps and glued them to one end. I was originally thinking of staggering the tubes down the height in zig zag fashion to get a couple of extra pipes in, but in the end decided against it. So 6 pipes at 600mm means we can store a dozen bottles.

I was also conscious that the inside of the pipes are very smooth and I was concerned that if the pipes were horizontal then the movement of the boat would mean that it might be possible that bottles might be able to slide out. I remedied this by angling the pipes down about 15 degrees so that they bottles would need to slide upwards in order to come out, although at some point if the stern is down by 15 degrees as the boat goes over a wave the pipes become horizontal again, but without having them angled the same amount of stern down would mean the bottles could be sliding. 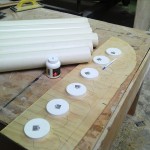 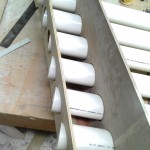 The next day, with the pipes glassed onto the front and set I glassed the second piece of ply onto the pipes at the back. I first ground off the small amount of pipe protruding from the front of the rack in order to make the front flat again. Here and there I need to fill gaps between the front edge and the pipes but that I would easily fill when coving the panel in place. I had already glued and glassed a piece of duflex to the hull side to act as a back stop that the back of the ply front would seat against. I smeared glue against the edge of the duflex strip and also along the back edge of the dagger case that the other side of the ply would seat against then  pushed the wine rack into the space. 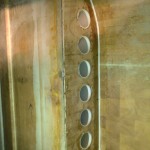 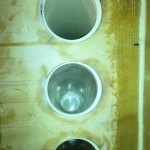 Then another of those happy mistakes happened. As I pushed the now set pipes into the space past the protruding rope slot panel on the side of the dagger case and it started to twist the front around on a slight angle to the hull side. Of course I had intended this angle to be a right angle, but that would have meant the bottle pipes run parallel with the hull side and being close to the hull seeing into the pipes or putting bottles in and out was close to the hull side. The angle meant that seeing into the pipes was a little easier as would be putting bottles in and out. So instead of trying to fix it I was happy with it.

The piece of ply I glassed to the rear of the pipes to act as a second support wedged in between the hull side and daggercase nicely meaning the entire wine rack is supported front and back. None of the pipes can move independently of each other meaning the entire structure is homogeneous. I could not glue the rear piece of ply in as there would be no way I could get glue and glass onto it, nor could I glass it in first then hope to get all of the pipes into each hole. It was just too much risk on or other would miss as the pipes are a little bigger at the rear edge because of the end caps that were glued on. So being wedged in is as good as I could hope for. I smeared some glue along the edge of the ply but I have no way of knowing if any or all of it had scraped off before the ply wedged into place and I cant see back there to check, nor will I ever see I guess.

Next I moved into the bedroom where I have been slightly remodelling the starboard closet. This is a cupboard I have built that will hide the starboard mast post. I built it because I wanted each of the bedrooms to have its own hanging space, the port side has an entire walk in wardrobe where this hull has the ensuite, the aft bedroom has the little room before the bedroom that has hanging space to the side, under what is the nav cabinet top, so this bedroom needed something. But because of the curve of the cabin top and the windows that will wrap around in it, I felt that the square corners of the wardrobe was intruding and light that the curved turret would have.

The mast post would mean the hanging rod would be angled so the part I intend to cut out would not effect the hanging space inside, the space would be wasted inside the cabinet anyway. I had considered putting a couple of shelves into the inside corner of the space but decided instead to remove it from the cupboard altogether so that I could open the space up again. Boats, even big ones, are small and the last thing you want to do is make them feel even smaller, or claustrophobic by making the rooms feel enclosed. So cutting the corner off the cabinet opens up the space just that little bit more.

The question became how to cut the corner off, angled, tiered, rounded? When I built the cabinet side and back into the boat there was already a cut-away section as the cabinet protruded past the ceiling because of the curved rise of the cabin sides. I did not want to build past that curved edge at full height as this would really close off the window to the rest of the room. But having thought about it, I decided that even more of the corner could go, not cost me any real storage space and open up the room even further. 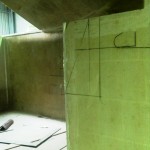 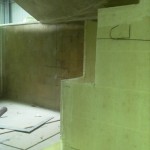 So having decided no how much I could cut away and not compromise the hanging space, and having decided I didnt like an angled cut away I decided on a tier. The top fill in piece would be curved to match the curve of the cabin side. But the back of the next cutaway I may leave flat so that I can mount a small LCD screen on, it can be connected to the the main video line so that if you chose to you could watch the same movie or tv or the plotter as on show in the saloon or you could play your own dvd separately. 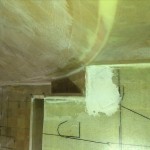 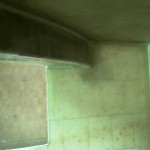 I kerfed a panel that had been cut to length (slightly oversize because curving it makes the required panel slightly longer) and height to fit the space and cut some kerfs into one side. I had not yet decided to have the kerfs on the outside or inside but once in place it became apparent that it would be easier to get a pleasant curve (to the eye) by having the kerfs on the inside. So next I simply glassed it into the boat.

One other benefit of this curved piece I have glassed into the cupboard is that it provides just that little more support for the deck. Next I will cut a panel for the next tier back and glass it into the boat. I can still decide to curve it but I dont think I will.