New year, could it be….nah lets just move on for now.

I have moved my blog to a new host/server and am having a few issues with the migration. Some of the pics have not migrated properly, I will have to reload them. Hopefully all will be back to normal in a few days.

Ok, update, tubes are in. So is the ladder. Davits are nearly ready to go in.

Assuming I have aligned the rudder tubes correctly left to right and front to back then the shaft ought to be exactly square and plumb and will function correctly when inserted into the bearings and ultimately connected to the hydraulic steering ram. Although I am supremely confident, I wont know for sure until the rudders are finally inserted into the hulls and connected up to the steering, which probably wont happen for a little while.

The balsa core of the hull was removed for 150mm around the shaft hole (ages ago) and to finally fit the rudder tubes I replaced the balsa core with 25mm ply. A hole was pre-cut in the ply to take the rudder tube, then the pad was glassed into the hull. (prior to glassing the pad in, the outside of the inside skin was glassed to the inside of the outside skin to seal the balsa core edge, this is in case any water ever enters the ply pad and can migrate into the hull core. The rudder tube is not glassed from the bottom only glued from its outside, I cannot glass into the inside of the tube as it is a tight fit already for the plastic bearing. So should that glue line crack and allow water in, it will only ever effect the ply pad not the entire hull core. A glue line between the ply pad and balsa core would probably have been a sufficient water barrier line, but this way is making absolutely sure. 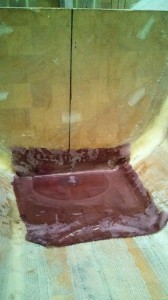 When glassing in the pad I didnt bother to cut a hole in the glass where the shaft hole is before hand, I just wet the glass out over the entire pad including the hole then when it set I used a router bit in my drill to cut the set glass away from the hole. 3 layers of glass on this pad overlapping by about 50mm to dissipate the load at the edges. 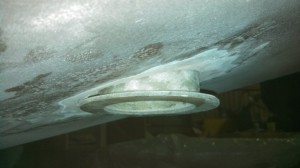 Ideally the rudder ought to sit exactly on the centre line of the hull. Getting the hole in the ply in exactly the right place seemed to be easy enough, I first dry fit the tube into the hull, through a hole cut in the outer hull skin (after the hull was decored from the inside) on the line of the hull centre. Then I dry fit the ply pads and traced a line through from under the hull onto the ply and cut that hole out. Dry fit tube again this time through hole in ply pad. So far so good. All lines up. 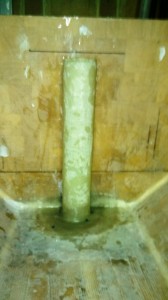 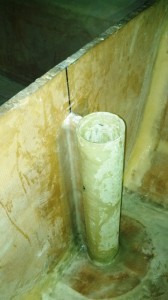 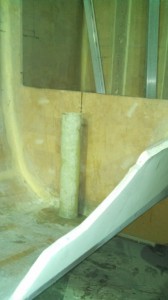 But…there is always a but. Try cutting a hole in anything then replacing that removed part with another part cut to fit for me at least, is not as easy as it sounds. There is always a little gap. And I glassed the edge of the core which gave it a rounded edge and an extra layer of glass on the edges meaning the gap would not be as even as a saw cut line. The upshot being that I had a bit of slack in the gap between the ply edge and the edge of the regular core. That slack meant that the perfectly sized hole cut for the rudder tube had to end up exactly aligned with the also perfectly sized hole in the hull skin. If they did not line up the rudder tube would not fit back into that hole. And of course they didnt despite my feeling the edges of the hole to see if they did, and they felt like they had. It was only out by a fraction of a millimetre but enough to stop the rudder tube fitting back in, a least not until I reamed the hole out a little to enable the tube back through. I wanted to try to keep the hole through the ply as tight as possible so there was contact with the tube to minimise any chance of glue compressing or cracking under load and letting moisture in. So having to ream out the hole meant gaps filled with glue. I was close enough that the reaming was minimal and not all the way around the hole. I am probably being a bit over concerned about this, the rudder tube is glassed in so strongly that movement is probably impossible. 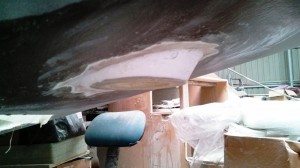 With the post glassed in, I set about finishing the bracing of the post and fairing the post into the underside of the hull. I dont intend for there to be any way this post can be moved. The post bracing will consist of 2 side ply walls glassed to the bulkhead and then a solid timber (cedar) keel bracing beam running aft behind the post. This will ensure the main load on the beam aft, will receive the greatest bracing. On top of the side and front brace will go a ply top plate which will also act as the table for the bearing. 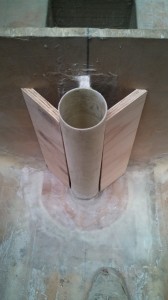 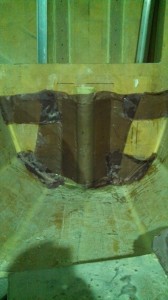 Once the beam is glassed in I can start to glass in the rear steps. I still have not finalised the bottom rear step configuration yet, all I know is that I want a large bottom step with space for a fold out swim ladder and for all the steps to have evenly spaced risers, which is already predetermined because the top steps above the rudder and over the outboard well have been made for years and have rises of 250mm. It may be that I cannot use the steps I made all those years ago as there are a number of issues with them, but I am hoping I can as it will save a lot of money in new material not to mention the time it will take to start again. 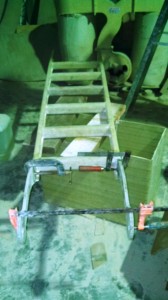 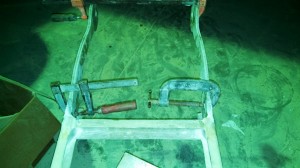 In the meantime 2 other jobs have continued, I have glued the side brackets to the bow ladder. I am concerned that the join of the side brackets to the ladder will become the weak point so I intend to wrap quite a bit of glass around the bracket and ladder to secure it. It all works as designed. I dont quite have the room where the boat currently is for the ladder to swing completely through its ark, the bottom hitting the wall in front stopping it from swinging all the way around and to the floor. The bows are currently 1.5  meters from the wall so it means that the boat can be tied that far from the dock and the ladder will still work as a gang way. 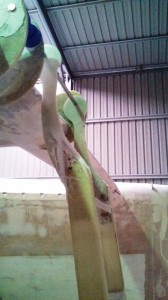 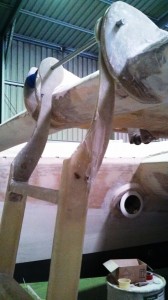 The boat is also currently 200mm off the floor at its lowest point (xmm from the design water line to the floor) in the cradles which equates to floating in xmm of water, and the ladder just touches the floor when swung all the way over. So we can theoretically deploy the ladder into shallow water and board the boat from the bow ladder. I have kept the bottom of ladder shaped to follow the curve of the D lockers but it also means a sharp point on them, which would dig in to a sand or mud bottom, the only place I would ever deploy the ladder, because on rocks there is a chance the boat could float onto the ladder then the entire weight of the boat could end up carried by the ladder on the outgoing of that water, which would smash it, at least that is what I think would happen, so best avoid that possibility. You wouldnt beach on a rocky beach anyway so it would not come up, but best to be vigilant for it. 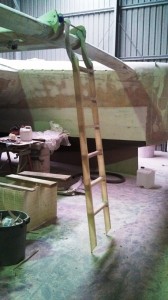 Once I have figured out and build/install the rear steps (which will include installing underwater lights), the rest of the work inside the outboard well will be completed (opening and closing trap doors for outboard to pass through hull, track and pulley mechanism for outboard raise and lower and an entry from inside boat and exit and up to deck system for the halyards, remember these pass down the mast post and into each hull and must make their way to the rear deck whilst maintaining a way to keep water out of the boat, that are designed to exit the inside of each hull into the outboard well) before the rear steps can finally be glassed in. There is also another system that has to be fitted, a little matter of the steering system itself, but that needs to be able to be retrofitted (removed and replaced easily) so that can wait until after the steps are in. I will of course figure the steering system placement out before the rear steps go in, but ultimately I want to fit them with the steps in, so that I know that at any time in the future they can be removed and refitted. 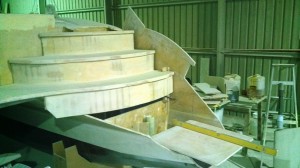 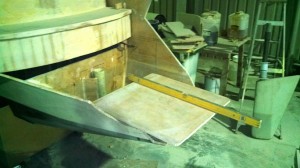 So far the pictures above is all I have to work on. The steps as per when I made them and a bottom step mocked into place. I know that I want as large as practical a bottom step as I can. The board I have in place is 800mm x 800mm (its the cut out from the front windows on the saloon). I will curve the aft edge of the bottom step to match the steps above it and need to add another step above it to fill the rest in. Unfortunately the riser heights wont quite be exactly the same, all the others are 260mm rise but the missing step will be 320mm above the bottom step. Under the steps will be sealed buoyancy tanks.

So hopefully over the next week or 2 I will start making some progress on cutting and shaping the rear steps into the boat.