Having decided after much research on water delivery methods, on a cistern I studied the float switch options. Most toilets have bottom fill vertical float switches with a float that climbs a vertical tube when filled to close the tap, and as the name suggests, they fill from the bottom. I wanted a top filler and initially I thought an agricultural lever arm ball float switch would be best as it would have a lever effect to help keep the tap closed off when full, but in the end I settled for a more compact animal trough float switch. They are robust, and being compact it meant I could reduce the size of the holding tank. The tank is in the V of the hull so the smaller (height) it is the narrower it gets, and if I used the lever arm float switch then I needed to make the tank taller in order to get the width I needed for the arm to clear the sides without touching. So with the more compact float switch I could cut down the height of the tank (I could not take depth from the bottom of the tank as I needed the outlet to be below the height of the bottom of the toilet so that it could not siphon) and as a result reduce the weight of a full tank. I dont need an overly large tank, even cut down the tank is still 12 liters and a full flush is 1.5 liters, so I have about 8 flushes in the tank should we lose power (the toilet has a hand pump). 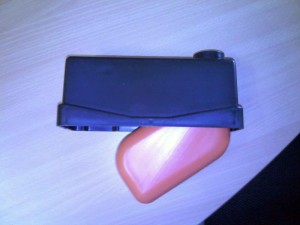 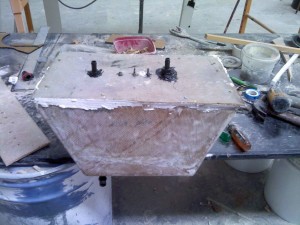 I attached the float switch with stainless steel bolts and sikaflex and I also fitted a breather hose fitting (a skin fitting sika’d to the top. With the skin fittings on I glued the top onto the tank being sure that all the ply had a good layer of glue as obviously I would not be able to glass the joins on the inside of the tank. Once the glue set on the cistern top I rounded the corners and glassed it down on the outside, completing the tank. I tried to test it but 2 things stopped me, more on this later, but one of the things that kept happening is the hose would blow off the tap outside when the float would turn the valve off inside the tank.

As I will need to fit all of the plumbing into a very tight space I found the QwikLock skin fittings to be perfect for fitting the toilet water take in point at the bottom of the cistern to the toilet itself. It needs to be removable as the toilet may need to be removed for maintenance and whilst the tank will be glassed in, the hoses may need replacing at some future point, so having a clip on clip off system is very handy. 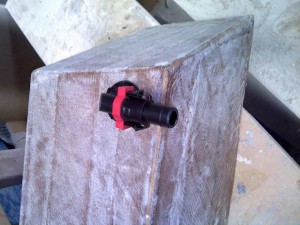 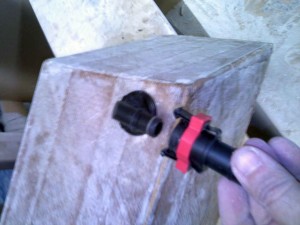