Tick another one off

There are not too many milestones left to tick off. Finally glassing the last piece of boat on, finally pushing a sanding board along and deciding it is ready for paint, painting, bolting everything back on, launch! And each of them more satisfying than the one before. I had a little one today that I have thought about for years.

Of themselves, most dont mean much. And I assume everyone that builds places different importance on different moments. For me, I have long admired the bottom step of a Fusion 40 cat. I had wanted to build a Fusion but couldnt afford the kit at the time. Had I been able to, I have no doubt I would have launched years ago. The Fusion comes as a pre painted (so pre faired!) kit of moulded parts that you glue (not sure if you also tape) and the biggest task, as it was with this build so far, is the furniture fit out, and it had a pre moulded kit (not sure if its an extra or comes in the kit inclusive, on a Schionning the furniture kit is extra and I didnt buy it). For me, it has been the custom furniture that has taken me so long. One thing I am still daunted by is the fairing, on a Fusion there is no fairing or at least it is only to fair the join lines. But I digress.

Now many argue that the boat I have is superior in design and performance to the Fusion, it is made out of better materials (epoxy rather than polyester) so is stronger and lighter, etc. I dont buy much of those arguments. I am happy to have the boat I have but would have been equally happy to have a Fusion and the Fusion also looks great. I am sure Fusion owners love their boats. The 2 things I would not have with a Fusion is the bi rig, and probably the custom furniture layout. Both of which I am very happy to have, so once launched, I think I have made the better choice for me but of course I am going to say that, aren’t I. We all find justifications for the decisions we have already made.

But one thing I have been determined to have is that bottom step. A friend who has sailed on Fusions counselled against them saying the protruding steps catch waves on the way through under the bridgedeck which no doubt causes some drag and slows the boat marginally. I considered that advise then decided that the benefit outweighs the disadvantage. And in my case the step is going to be about 150mm higher off the water than the Fusion step so I figure for waves to be that much higher, wind will be that much stronger so the loss in drag is made up for the increased drive of the wind. Besides, I have no interest at all (very surprised at how often people argue that I will change once I am sailing!) in tweaking every last bit of speed out of any sailing I do, so loss of performance is meaningless to me. This boat is going to be much faster than some and much slower than others. So what! So performance or my impinging on it is never a consideration unless I am making the boat unsafe in the process. I figure if Fusion have included a step overhang they had considered the pro’s and con’s and went with it, and although mine is a different design, that’s good enough for me.

And standing on the completed bottom step today is the culmination of the years of contemplation of the idea of a fusion-like step. Yesterday the top panel was only sitting in place, today it is glued down so I couldnt really stand on it safely yesterday. (It still requires external glassing and fairing but lets not quibble about when is a step a step!). So yesterday I finally glued down the panels in each hull leaving just the angled stern plates to be glued in. Today I glued them in. And got to stand on the bottom steps (actually before I glued the last plates on). And sit on them, and put a folding chair on them, sat on it and daydreamed of fishing. In fact, the next time I get this much satisfaction from standing on these steps is when there is water directly below them. I still have to make a lid for the boarding ladder scallop on the port side and glass everything in. Then I can move on to glassing the next step in (I have to either lower it to meet the bottom step ensuring the steps above can lower to meet it, or add some material to it so that it all closes up, either way, I will be using what already I have).

So to pick up where we left off last post, I was toying with carrying the angle of the stern plate around the curve and onto the step extension. I decided though, that this extended the extension too far so I trimmed the sides back to square and would shape the curve from angled to square through the curve. I made the extension 3 panels thick and decored the edge of each of them. Glued them all to each other as I stacked them in place, starting with the bottom layer and glassed it into the inside of the hull, then laying down a wet mix of glue the next layer was glued down and finally the top layer, which will meet up with the rest of the step when it is finally glued down. Then the decored edges were filled with filler that will be shaped once set with a curved edges top and bottom before being totally covered in glass including around the hull extension to complete the new stern. 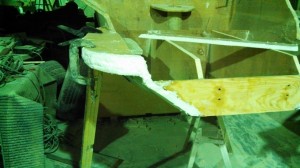 With the step extensions set (and partially shaped) I did the final preparation for gluing the bottom steps down including glassing in more baffles and webs to strengthen the hull extension and to confine any water into sections that have bolts through (under the step platform in the port hull and in front of the U-bolts in the starboard hull) so that if they ever do leak water into them the area that can fill with water is very small and the water is stopped at the baffle from filling a larger area (the more water, the more unnecessary weight I am carrying for no gain). And with that came the final act of gluing down the panel. As with the soles inside the boat, there is no way to glass from underneath, except through the small angled section on the stern plate, which is the very last panel to go on. The full glass sheath that the extension will get ought to be enough to hold it all together, given that there are webs inside stopping any panel from moving inwards.  Nevertheless, just to be safe I glassed as far as I could the underside of the bottom step to the webs from through that angled opening, which is why I left these small plates until last rather than glass them inside first before putting the lids (steps) on. Then came the moment I could do what the first picture shows. Stand on a completed rear step and dream of fishing from them one day. Then back to the reality of the build. I glued the port small plates on and will make the ladder cover tomorrow. The starboard hull is still to have the plate glassed on because I have not yet glued the U-bolts in. As I did in the forebeam, these will be glued in using a special flexible epoxy that stretches a little so that any movement in the bolt does not immediately cause it to leak. I dont anticipate there will be much weight on these U-bolts (unlike the forebeam which will carry the anchor bridle) so there is little risk of them ever leaking (famous last words) but as mentioned, I have baffles in place to contain any leak to about 6 litres of water (the baffle is about 100mm back x 200mm high x 300mm wide). Then I stood back (or climbed up) to admire my work. Tomorrow I finish the U-bolts and close the starboard step up, then start dry fitting the second to bottom steps on each side and preparing for glassing the outside of the stern (sanding upside down!).

Pretty happy with these steps.

One more decision I have to make on this bottom step is to do with the side profile of the hulls. I have extended by 250mm and also have a slightly higher deck at bulkhead 7 so I still have to finish the side profile. The issue I have to decide is looks (and I still cant decide which I prefer anyway) vs function. When I add that side profile panel do I start it at the rear edge of the step or do I leave it where it currently is. If I also extend it to the end of the step I keep the traditional look of most cats. However, I also like the look of the part of the bottom step protruding visibly past the end of the hull side, but what this feature also does is allow easy access to the step from 3 sides, or more importantly from the outboard side of each hull.

This next pic explains exactly what I am deciding now. You can see in the pic that the hull side is still to be glassed on, with an off cut sitting in place to give an idea of it, but this offcut ends at the original designed hull end not the new hull end. When a boat is at anchor it faces head to wind and the usual approach to a boat is into the wind so that the wind is pushing you away from the vessel you are approaching rather than into it. With the open step side on the outboard side it allows you to dingy along side the hull on the outboard side and either pass things onto the bottom step from that side or even step off or on with the dingy on the outboard side. This is a very handy feature to have, especially in rough conditions and I am of a mind to leave that bottom step open all around.

Feel free to comment on this idea if you have anything to say.