The night before the move.

Jo and I have done everything we can in preparation for the hull move tomorrow. We have cleaned the old warehouse out of as much stuff as we can, swept and vacuumed as much dust up as we could and moved the overturned hull (the one on the cradles) all the way over to the far wall making the space between the hulls as wide as possible. It is hoped we can just back the trailer in along side the hull, in between the two hulls and just lift the hull off the strongback onto the trailer. With 6 men we should have no problem lifting it across.

We had a bit of a scare today. Warren has organized the trailer for tomorrow and we have about 6 or 7 people coming to help us move, but today the key jammed in the lock of the door to the new warehouse and locked us out. After the panic subsided we called the agent who organized a locksmith to come and change the lock at about 4pm. With that done we dropped off the second of the cradles that I had assembled today and went home.

I must admit to being a bit nervous about the move tomorrow. I guess this is something like what it feels like just before the launch, except perhaps a little less intense. The move itself is not that far. The new shed is only about 2 kilometers from the old shed. So that means we should only be on the road for about 10 minutes for each trip. And lifting each hull onto the trailer should not take more that 15 or 20 minutes including strapping it down, and about the same for lifting off, turning over and placing on cradles. So about an hour for each hull should see it done. We plan to start at 10am and all going well should be finished about noon ready to relax with a few beers and a bbq lunch. So if we have no trouble I should be able to include pictures and a report on the move tomorrow night. 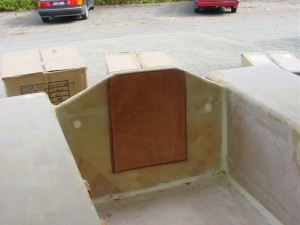 Finally for today, I have pretty much finished the dingy. In the picture you can see the transom plates are glassed in, the glass also sealing the exposed balsa along the transom edge and covering the filled oversize holes for the towing eyes. The seat blocks are coved and glassed in. I didn’t get a chance to cut the hatch lids out and hinge them back on or to paint it or fit the deck hardware but will do that during the week and take some final photos before I launch it.