In order to install furniture the soles below them must be glassed down, but in order for them to be glassed down any under-sole work needs to be completed, as it was in the ensuite (I had some plumbing to install first) and in the robe and port bedroom as there was nothing needed under it. I still have some work to do in the starboard sump. I have decided that I want to use the full width of the hull as the sump but I want to retain the web for hull strength. The web will either need limber holes to or I need a false bottom in the sump. I settled for the latter, as this also allows me to direct the flow to one corner (rear inside) where the pump will be fitted and in doing so minimize the water that sloshes around in there after the pump shuts off as it never gets all of it.

First I cut the middle of the middle dividing web out leaving just the front and rear edges to act as a base for the top. I then cut a piece of 5mm ply to size and shape including cutting some slots in it to accommodate the part of the web I left in. It needed some trimming here and there to fit exactly how I wanted. I then glued some strips of duflex under where the sump base would sit to act as a base for the glue to pool in and set it out so that the aft inside corner was lower than the other 3 corners. I then glassed both sides of the panel and then had a break for lunch.

After lunch, the glued strips and the glassing wasn’t dry yet so I started work on the next under sole section that I want to get done so I can glue and glass the next sole down and start on the next section of furniture, the section in the port hull that includes the dagger case and the stairs. On the forward side of where the bathroom wall is going to be there will be nothing under the sole so it can go down, behind it, in the bathroom there will need to be some plumbing. The only thing that I want under the sole is a solid timber beam to run from the back of the dagger case to the next bulkhead. 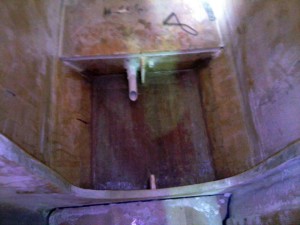 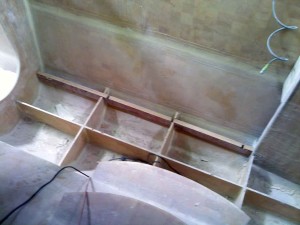 I am paranoid about ever hitting anything with my daggers down and the dagger acting like a knife and tearing the back of my boat apart so when creating the cases I made them way stronger than the plans suggest. I used19mm duracore instead of the 13mm and 25mm ply for the back edge, and then wrapped the bottom rear half and top front half of the case in 3 layers of uni glass. They are somewhat heavier than they otherwise would be but I feel much better about them ever being able to be torn open by the daggerboard. And to finish off the structure I have had it in my mind to run a timber beam along the bottom of the boat to the next bulkhead just to spread the load bearing out a little more. Probably never even touch the daggers on anything but I am very much in the safe rather than sorry camp.

I cut the beam to length, then cut the slots in the web. Easy. I will glue a ply pad to the bulkhead to spread the load out over a larger area of the bulkhead to avoid point loads. All of this is hidden under the sole, although the back section of this area will be the port sump so the rear part of the beam will need to be sheathed (glassed) or epoxy coated to stop moisture from creeping inside the timber and rotting it.

I will also need to give the inside of both sumps a coat of the white epoxy, probably 2 coats, this not only seals it, but it makes it easy to wipe clean.

After an exiting week it was good to get back onto my own build and make some progress.