Today the temperature hit 33 and a cool change came through just on quitting time. Perfect! I finished the day exhausted but really pleased with the work I got done. I wasn’t happy with the results of the pvc tube experiment for the cockpit roof edge and I gave it a little more thought. In the end I decided that foam would be the best material to use for the edge. The reason is that it can bend both ways up and down to follow the curve of the roof and around the roofs corners.

The reasons I decided against the pvc was firstly the difficulty of getting the curves and cutting the slot for the roof, it meant more work for the same result. Also because whilst the pipe would be a nice shape to hold on to along the roof edge I decided I would rather have an actual hand rail and for that I need a flat surface to mount it to. A hand rail is very handy for hanging towels, and for attaching a lifeline to a harness for use on overnight passages, it will mean unrestricted movement around the cockpit whilst tethered for safety. I was going to try a timber edge but whilst timber can be kerfed to go around the corners it cant bend up and down well enough to meet the curve of the roof.

First job today was to cut the shape of the roof that I had marked out on Thursday. I then cut the nidacore panels to size to fit to the cockpit roof and the glass to go on both sides of it. I wet out the scrim of the panels and glassed the panels off the roof on a workbench. I then spread glue (resin with microspheres) over the cockpit roof and placed the nidacore sheets with the glass still wet onto the glue and left it to set. I attached some strips of timber with screws through to the roof to pull the core down onto the roof to ensure a good bond. This work took all morning and just as I was gluing down the panels Jo arrived with lunch.

After lunch I wet out the exposed scrim and glassed the nidacore on what is now the underside of the roof. I let the glass tack off a little and I cut some foam to make the roof edges. Once I had cut them the glass was tacked off enough so I spread a thin layer of bog over the tacky glass. I made the bog a little more runny than I would normally as the core is pretty fair and is well shaped but I needed to fill the weave of the glass and enough thickness to fair out the roof underside tomorrow or Monday when the bog has hardened. 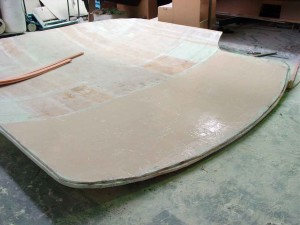 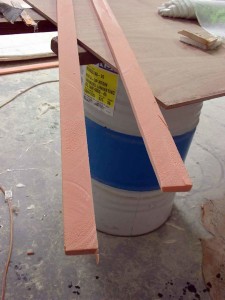 Because of the heat in the shed, the glass had tacked off in only half an hour. It took me half an hour to cut some strips of foam, I ran a cut down the 40mm edge of the foam sheet 60mm deep then I cut the edge 60mm off leaving me with 2 strips 20mm x 60mm. I did this twice as I needed 3 and a half lengths to wrap around the roof. After I had bogged the roof I mixed some glue and buttered the edge of the roof. I then screwed the 60mm face of the strips to the roof edge. I made the bottom edge of the foam flush with the nidacore bottom of the roof, and the top edge would overhang the top of the roof by about 20mm. The foam is flexible enough to easily bend up to the curve of the roof and to wrap around the edge but needs to be screwed down to hold its shape while the glue sets. It will then be glassed on with layers of uni to stiffen the structure later. By the time I was screwing the edge foam to the roof edge Jo had arrive to pick me up. I was exhausted, hot, itchy and I had a bit of epoxy rash on my inner forearms. Worse than usual but it soon subsided once I had showered. 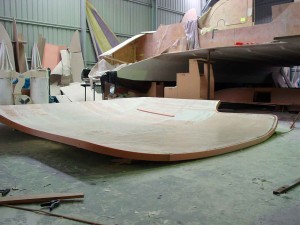 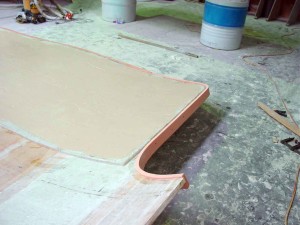 I left a small gap between the edge of the nidacore and the foam roof edge. The purpose of this 20mm gap is for a trench for the LED rope light to sit in. I will run some glue in the slot then a strip of surfboard cloth down into the slot to finish the trench, then later when I am fitting the electrical out I will fill the trench with the LED rope light and silicone it into the trough once the boat is painted. I also left the nidacore 300mm short of the main bulkhead. The reason for this is so I am glassing the actual roof to the bulkhead. I will then fill that 300mm strip in with nidacore over the glass tapes, and then once it is glassed I will run another cove and tape the nidacore to the bulkhead also. The I will just need to fair out that last strip to finish. That way there is no chance of the roof to bulkhead failing because the secondary bond between the nidacore and the roof failed. It is insurance to ensure the main bond between the roof and the bulkhead is as per the plans, in fact stronger than the plans because of the extra tape between the bulkhead and the nidacore as an addition.

I worked pretty hard today but again the time flew by and I just managed to do all I set out to do today. Tomorrow, a layer of uni on the foam edge, round off the edges with a router and glass the edge to the roof top and bottom and maybe even fair the bog if it is set. In winter there is no way the bog would be set but in summer it is quite likely. Once I have sanded the bog I will attempt to turn the roof over to glass the edge to the roof top but I may need help to turn it over.