I have had a frustrating 2 weeks and little got done on the boat despite me working on it for both weekends. I couldn’t seem to get any actual work done. I did a lot of mocking up and a lot of staring at it but not much actual construction. We also had a bit of bad luck with our car, the auto transmission causing a breakdown which we are being quoted half of what the car is worth to fix. We think we could get $8000 as a trade if it was running but the quote was $4000. And at a time both of us have shipments being made so we have to pay for them very soon. My hatch shipment is $18000 so money is very tight. We were rescued though, a customer of Jo’s has a cheap car she sold us in exchange for stock instead of cash. That buys us some time so that we can fix the car at a time when cash is not so tight and we can also look at buying a transmission from a wrecking yard and have it fitted by a home mechanic rather than the shop it is in now and perhaps get out of it a bit cheaper. We were going to trade it later this year after the shipments were paid for, we had been looking at cars online for weeks. Anyway, these things happen.

I have glued and glassed the steps into each hull. I had to, I am not getting any younger and with lots of work going on in the hulls now climbing in and out was getting harder and harder. Now it is really easy. I have not glued in the bottom steps as I have not finished the under sole work yet so cant glue and glass the soles down yet. I cannot lift the soles out if I glue in the bottom step.

Before I could glue and glass the steps on I had to de-core the front edges as they will be exposed. You cannot leave exposed balsa anywhere on the boat. That includes inside the boat. De-coring is really easy on panels you can get to with a router. I have a blade that cuts a slot in the balsa as close to the inside face of the glass as you can safely get. Then once the slots are in (to a depth of about 10mm) you can twist a chisel or screwdriver in the slot and the balsa breaks out in chunks because the grain runs from slot to slot so it just breaks along the grain.

Once the balsa is removed including running a chisel blade along the inside glass to be sure there is none still on the glass, then it is just a matter of mixing up some thick coving compound and filling the slot, slightly over full so that it can be sanded back down smooth. You also have a much better surface on which to round the edges. I de-cored all the steps and under step bracing pieces and filled them all at once, clamped together so it was an easy fill job. 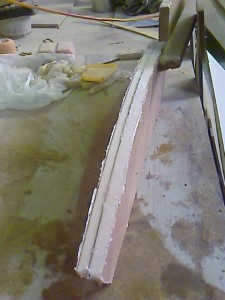 The port steps are further forward than the starboard steps. Both steps have a wall to aft and furniture on the forward edge, in the starboard hull the wall is the bedroom wall and angled at about 45 degrees, in the port hull the wall is the bathroom and will be at 90 degrees to centreline. It is further forward (and not angled) because of the position of the kitchen on that side of the hull. The kitchen bench top forms part of the bathroom roof and the wall is and extension of the side of the kitchen cupboard and forms part of the stair wall with a handrail on it. So the step positions were determined by where I wanted the kitchen cupboards to be. I have a plan for a bench top that runs along the rear bulkhead and then at 90 degrees along the hull with the top against the saloon walls, interrupted by the stairwell then starting again on the other side and around 90 degrees again will be more bench top over the fridge freezer. Over the stair well I want to have a hinged top that can join the two bench tops to form an uninterrupted bench top all the way around so that the kitchen when needed can be as big as the one in our house. This can be very useful when preparing larger meals for larger groups when entertaining. You can sit 8 around the saloon dining table and another 4 at the outdoors breakfast table so we could conceivably be preparing a meal for 12. 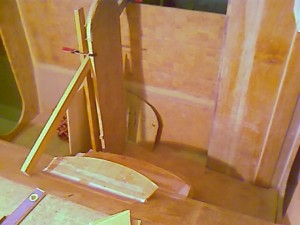 Another task I have managed to do which also was decided a long time ago based on our plans for the kitchen is to resize the saloon cockpit doorway. The standard size is 1200mm wide, which is a great size but we felt we could sacrifice 300mm of it to make the usable kitchen space that little bit bigger. We have seen (on a Schionning Alaskan 45ft power cat) a floor to ceiling pantry against the doorway and we are going to replicate that in the space I have reclaimed from the doorway. I have known about this since building the cockpit furniture and made the seats accordingly. The plan for the doorway is to have a double sliding door, sliding to each side by 450mm to create the 900mm opening. We can also have insect screens do the same.

The other resize job that has been on the cards for a long time was the rear bunk opening. The chamfer panel angle makes the hull wider as you get higher. The bunk if set to the opening that was originally cut into the bulkhead would have the bunk as a single bed or a king single at best. In order to make it a double bunk I needed to raise the bed height which in turn required the doorway to be raised by gluing (and glassing) duflex into the space. The raised bed height means less headroom but we would rather a double with less headroom than a single with added headroom, and it also means added depth to the under bed storage area which could house pushbikes or even a moped motor scooter if we build a lid to the bunk that can be opened and we use the boom as a crane to lift it out (and swing it over onto the jetty wherever we want to unload it). I have not settled on the shape of the opening yet. I may square the shape up or make it symmetrical, or leave it as it is. I will decide that once I build the bed base in and try out the opening. I will also build a step to make getting in and out of the now raised bed, and this step can double as a storage chest (the lid would be hinged) and as a seat in the bedroom.

So although it seemed like I got very little done, some big decisions have been finalised and put into practice by the fitting of the steps and the resizing of the openings. At the very least I can easily climb in and out of the hulls easily now. I have also crossed 2500 hours.