Today we started to assemble the second dingy. Most of the parts are either already cut or we know the dimensions we have to cut to so the cutting wont take long.

Before I get to the second dingy I want to report on the fun we had on the weekend. Warren invited Jo and I to join him on a day sail from Ettalong over to Palm Beach on Pittwater, about 5 nautical miles away. The purpose of the sail was to tow across water an outrigger canoe for a race regatta rather than tow it behind a car for 2 hours around each way. So the 12 crew members (6 men and 4 women and support crew), Jo and I and Warren motored across in the morning because what little wind there was was directly on the nose, and sailed back in the afternoon.

The highlights for Jo were that she got to drive a 40ft cat, something I have not yet done, and she got to cross the swell of Broken Bay where it opens to the ocean and not feel sea sick like she did the day we crossed it on a ferry. She did feel a little off in the afternoon when one of the guys steering was chasing speed and zigzagging a lot to catch waves to surf in on and criss crossing the swell can be unpleasant. One of the highlights for me, besides staying aboard for a few hours whilst everyone else went ashore for their various races, was that in order to reload the crew and gear and then unload them back at Ettalong, Warren beached the cat. It couldn’t have been easier. It simply slid up onto the beach, was loaded up with about 1 ton (1000kg’s) of people and gear and then simply pushed off again. Then repeated to unload them all just to prove how easy it can be. The Crowther has fixed rudders so it should be even easier to beach our cat although I am sure it will take a while to learn how to make it as easy as Warren makes it.

We had a great day aboard. Jo and I were alone on board for a lot of the day and did things I look forward to on our boat, such as lazily reading the Sunday paper, swimming and watching the world go by without a care in the world. It makes all of the work building pale into insignificance.

We have finished Warren’s dingy, well as much as we will do together, Warren will cut the lockers and hinge the lids on, and attach the various deck furniture himself. We have now started on mine. But before we did we gave his one final shake down. We found that with the lids on the resin is quite slippery and you slide around a little whilst driving so we think the solution is to apply marine carpet to the tops of the hull sides to sit on without slipping around. Other than that we are very happy with the dingy the way it is now. It is super fast and maneuverable.

One of the other tests we did was to have 3 85kg guys (I am 90kgs, Warren is 80kgs and Tony is 85kgs) all stand on one hull and it barely sank half way to the chamfered panel retaining about 200mm of freeboard. I cant imagine when we will ever need to have that much weight on one side of the boat and none on the other but it can do it easily. I also had a drive and Warren encouraged me to drive it fast to illustrate that at speed the boat actually feels smoother as it cuts through chop. A cushion of air forms under the wing and the boat doesn’t slam as you might expect it to. That is not to say that it is uncomfortable going slowly through the chop as you would on a normal tender. It is very stable and handles the conditions easily. Click here to see a small test video of Warren driving the boat fast!

Today Warren and I spent about 3 hours getting started on the construction or more accurately, assembly of the second dingy. Most of the panels are already made and ready to glue together. We are taking a slightly different approach to making the second one to save time. We are going to glue it all together first then do all of the taping in one go. This way we will also save a little weight by not taping over tapes. 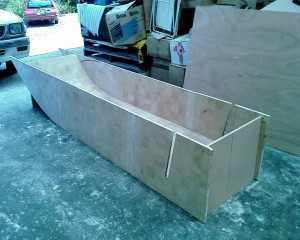 We have glued the inside hull panels to the bridgedeck and also glued in the rear (transom) bulkhead. We cut the kerfs into the deck, glued it up, then glued it one side at a time to the side panels and held it in place with screws to set overnight. We also glued in the rear bulkhead. Tomorrow we will glue in the forward bulkhead and the internal bulkheads ready for the rest of the hull panels and we may have them all in over the weekend.