Start on the Starboard Bedroom

I have previously marked out where we could build a hanging cabinet in the starboard forward bunk. The aft bunk in this hull has a space for hanging clothes and of course the port bunk has its own dedicated closet where the ensuite is in this bedroom so it needs some space. The issue with all space is its use usually precludes it not being used, what that means is something cant be both there and not there, so anything built in must on be obtrusive. That is certainly the issue if the hanging space is built on the aft bulkhead of the bedroom (the one between the bedroom and the saloon). In a catamaran the boat lifts and falls at the hull ends, its called hobby horsing, or I call is seesawing. As with a see saw, the closer to the middle of the boat the less this occurs, so obviously in a fore and aft bed, you are likely to be much more comfortable having the pillows as close to the center of boat as you can, meaning in this case, our pillows would be at the aft bulkhead.

Another thing likely to induce claustrophobia or discomfort (and perhaps danger) is having the area around the pillows surrounded on 3 sides by building out the space with a cupboard. There is never an issue with having a wall behind the pillows, nearly every bed everywhere in the world has this, nor is there a major issue with having a wall down one side of the bed but a wall down both sides does induce a feeling of no escape and claustrophobia and in some cases such as the rear bunk, this is unavoidable, but where it is avoidable it is advisable. So it did not take long to rule out a floor to ceiling cupboard at the aft end or pillow end of the bed. That only left one option.

Whilst access and space is compromised by having a mast post in the room where I want to now put a hanging space the cabinet would at least hide that mast post and provided additional support for it. But having a part of the bed at your legs closed in is nowhere near as claustrophobic. So it is decided. At the aft (pillow) end of the bed there will also be a cupboard but it wont be any higher than the height of the mattress. It is additional storage space, fills the space above the chamfer and provides the aft side of the steps up into the bed (the front edge of the steps are up against the side of the hanging cupboard). 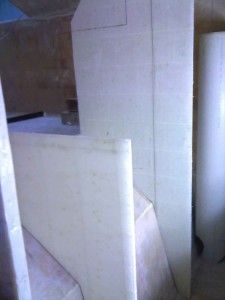 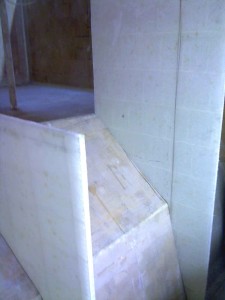 The bedroom between the bulkheads is 2000mm, the first measurement was how wide the steps ought to be. Anything over 500mm is adequate. I felt that 750mm was wide enough for the steps. That left 1250mm of which I made the hanging cupboard 750mm and the forward half cupboard 500mm. So with the size all decided I got that trusty mdf template out again and marked on it the adjustments needed for the 2 positions of the 2 cupboard sides for transposing onto the polycore panels the further forward you go the more out of shape the template is and needs more adjustment when transcribing because of the change in angles as the hull sizes change (it narrows the further forward you go as hulls tend to do!). The forward of the 2 panels being full height (2000mm floor to ceiling) and the aft panel only to the height of the bed surround, which is 150mm higher than the bridgedeck, 50mm taken up in the under-bed frame and half of a 200mm mattress covered by the sides of the cabinets. 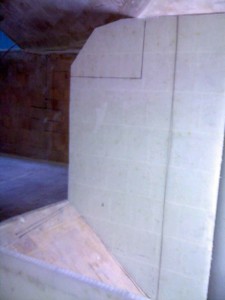 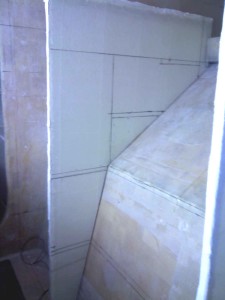 With the size transposed and the panels cut, I was pleasantly surprised at how accurate I am getting at cutting these panels that meet the various angles of the hull and chamfer panel. I am now getting to less than 2mm tolerances. On the first panel I cut (the starboard aft bedroom wall that ran at an angle to the hull) I was about 10mm out in places but to be fair that panel was not square to the centreline so adjusting for the angles was somewhat more troublesome. Of course the temptation is to glass them in straight away. Alas you cannot do that, well you can but you make more work for yourself later or the work you must do harder. For starters the front edges (and the top edge on the half cupboard) need de-coring and back filling. Which of course is what I did to finish up for the day. The setting of this stuff takes at least 24 hours, more like 48 in winter until it is set well enough to sand. So in the interim (I filled them yesterday but cannot sand them until tomorrow but they are set enough to handle) I have marked out the shelve and step heights so that I can create a cutting list for the steps and shelves. The heights dictate the size, the higher off the sole the deeper the shelf or step as the hull or chamfer angles away from the centreline. Next step is to cut the various panels I need to create all of the various parts and to de-core and back fill any exposed edges.

Setting out, marking etc takes a lot longer than you would think. Especially if you are winging it without a set plan or kit. And you live with your decisions a long time, so it is appropriate that due care is taken to think through the implications of each decision. Those that know me understand the depth to which I think through some of these implications but some of this no matter how much you think about it, is not possible until you have the parts in place. Obstacles present themselves that you had not considered. One such issue is what to do with the top aft corner of the hanging cabinet because it protrudes out past the point where the cabin wrap around shoots up from the deck/roof. I would prefer not to protrude into that air space as it looks out of place so I will just have to trim the cabinet for that 200 or so mm (its a triangle shape so imagine a block with the a corner removed about 200mm along the 3 faces, one down and one at each right angle. It is only a small section that intrudes past the curved wrap around but even that small overlap will look out of place, so once the cupboard is shaped on that corner, whilst it will mean that area is smaller than the depth required for a normal hanger, it is only a small section, I may fill that space with shelves (so a vertical internal wall and horizontal shelves to fill the space. I cant really move the side wall forward because that effects the width of the door I can put on the front of it, because the mast post protrudes into that space, so with 250mm of the door space already taken with the mast space, moving the wall the 200mm would mean the opening would only be 300mm which is probably not quite wide enough for an adequate door.