Start on the shower base.

The shower sump is not directly below the shower. I have made a sump in the bathroom under sole that will house the sump for the vanity basin as well as the shower, and I will have a direct overboard for the kitchen with a 3 way valve before it goes to directly overboard in case I am in a nil discharge and have to send it via the holding tank. I am only going to hold it where I absolutely must because of the need to catch solid waste such as food particles that would otherwise foul the sump pump. Anyway, the shower base and drain will be glassed into the hull to form the sole and web as the floors in the other rooms do and a drain pipe will be glassed through the bulkhead into the sump already built into the bathroom floor. From the outlet pipe in the sump I can use my hair filter idea of a stocking sock over the end of the pipe. The idea being that the sock will allow the water through but catch hair that would otherwise foul the float switched bilge pump in the sump and once a week or so you take the sock off take it to the sea and turn it inside out to clean it then replace it with the elastic band to do its work for another week. Simple. 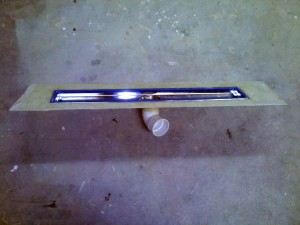 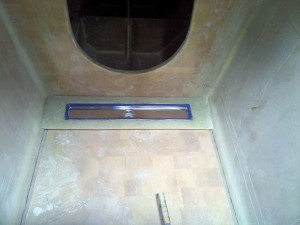 The shower base is duflex that I will give an extra layer of glass and bog and fair it for painting. It will run on a slope down to the drain grate and that too will have some bog laid each side to create a slope across the hull to the drain. I have not decided yet whether the shower base will just be white. I had my eye on a fancy single tile exactly 800mm square which is the exact size of the shower base no including the drain but it is just too expensive. It is called a liquid tile that has coloured oil inside that moves when you stand on it, but they want $700 for 1 tile which I just cannot bring myself to pay. As stunning as it would look, its not worth that much. So fitting the drain presented a simple problem to solve. I decided to use the underside of it to create a mold by taping it to a flat bench with clear tape and then laying glass over it. The underside of the drain has a mounting groove around it so I ran the tape inside the groove. The intension was that once set the glass mold would pop off the drain underside and I could then sikaflex it in when ready. The problem was that once set I could not get the drain out. So I will still run the sikaflex to seal it but no water is ever going to get through anyway. The sika will just fill the curved edge void that the glass did not fill. I siliconed an elbow join to the drain outlet and glassed it on to be sure it cannot move, and I will also glue and glass an extension drain pipe into the bulkhead so that the water drains straight into the sump on the other side.

Next step is to build a series of webs out of duflex (again I should have ample offcuts big enough for this), and glass them into the hull to support the duflex shower base and the solid glass drain (and to provide he hull reinforcement that the rest of the boat has). Once all that is in the shower will be ready for the next step which is building the walls to fill in the under cockpit seat cavity (which will house the watermaker) and the back shower wall which will have a watertight door in it which will lead to the laundry that will have a small portable washing machine, the water heater and some storage for various spare parts.