I waited and waited for a visitor for 5-10 minutes work. On the port side deck I had Jake helping, and on the starboard side to hull join the panels were almost fair to each other and I only screwed them to ensure they did not move from the good alignment they pretty much already had, here and there one or the other needed moving with the block. A bit hard to do on your own as you need to be on both sides of the hull at the same time! One the top side to deck join the panels needed pulling in some way (about 10mm) so I waited until I had a visitor. Well Terry (Easy 37 builder, and helper for some milestones such as roof on lifts) came around yesterday afternoon so I had his help for the 10 minutes it took me to run blocks and pull the 2 panels into alignment. Having Terry line blocks up as I pushed screws through from above took just 10 minutes but saved me about an hour of messing around climbing up and down trying to be in 2 places at once.

Once the blocks were in place I filled the join with glue, pushing it in from above with a spatula then running along inside and smoothing out the overflow and filling the underside voids between the blocks and let it set overnight (no danger of it not going off overnight as it was 20 overnight).

Later this afternoon I am flying to Brisbane (I am typing this on the train on the way to the airport) to visit Jo for a couple of days so I got up early so I could get the side deck joins glassed. First I remove the blocks and had to sand down the glue and trim the bog back wide enough to take the tape on the top join, the side deck was glued and sanded last week. Then I cleaned the 2 joins of dust and filled the voids that were under the blocks with filler. I cut the tapes to length and then fired up the wombat for the last time (it is only useful for long tapes shorter tapes are easier to wet out on a table with a squeegee) and wet out the 4 long tapes. The wombat is a totally manual machine, so when I say fired up, I mean set up a bag to hold the resin, loaded a tape on the top roller, fed it through the bag and onto the bottom roller, mixed the resin and poured it into the wombat bag and slowly wound the tape through the resin. In order to ensure that the tape has a good holding on the vertical surface of the side to hull join I brushed some resin along the join.

Then I applied the first tape (the top deck to side deck join) onto the boat. Repeat the above for the second tape, the side deck to hull join (resin now tacky that I brushed on earlier) then third and fourth tapes, the 100mm second tape layers. Then the peel ply. The peel ply is handy for 2 reasons, first it will mean that I can bog the boat later and not have to key the surface of these glass tapes, and also because it provides a good surface to push hard on the consolidating roller with no risk of catching a loose thread and pulling up the tape. It means that the tape has no air bubbles between each other or the bottom one and the substrate. 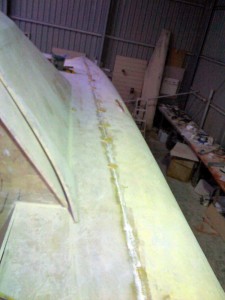 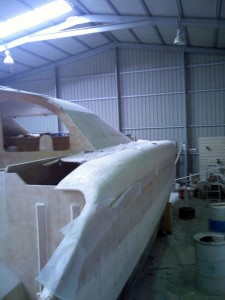 All done by 11am (I started at 7am). I just have 4 internal tapes (I have done the most forward one inside the toilet area) on the top join to do to be finished attaching the side decks (for now, once the outside is fair I will cut sections out for lids of storage lockers that will give me access to the joins in the sections of the bows I cant get to yet). Although I will miss some good working hours tomorrow and Monday (Anzac day) probably another 14 hours, I have managed some good progress this month, and will achieve the goal of getting the side decks completed this month, I should get these last few tapes on during the weeknights next week. All in all a very productive month.

In the end I ran out of time to get the tapes on this month, but with just an hour or two of work needed I count that as close enough to reaching the goal I set myself for the month.