The starboard seating is going to be much different to the port side. The helm requires a different arrangement and there is no need for a table on both sides. The helm position needs to be raised so that you have visibility from a seated position as well still as being able to chat with everyone else on board, see into the cabin and the electronics etc. and for docking I need to be able to see all four corners of the boat. My solution is to have a raised helm and I was originally going to build all the way up to the raised position but instead I have decided to go for a the helm seat on legs so it can be raised or lowered to the height required and when at anchor can be lowered all the way to normal (or just above normal) seat height. I will still have my original idea of a hinged seat back so that the seat can face forward or back. Jo was trying to think of the correct word for it and came up with Swivet, she was thinking pivot and swivel at the same time and the 2 words mixed as they come out, so I think we will use that. The seat raised on legs also gives the cockpit a less closed in look and feel.

I “borrowed” a couple of helm pics, one from Lightwave and one from Perry, but because both of those put the helm on the port side, I have reversed the pics to give a better idea. I hope they don’t mind. The Lightwave shows the raised helm idea a little better although I don’t intend to have a soft raised roof and the Perry shows the seat back style and how easy it is to change the look of the boat with seat covers. 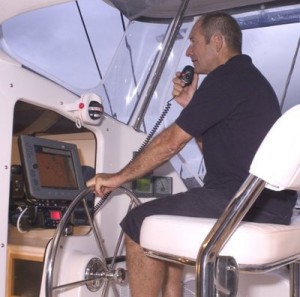 The first thing I did today was to mark out on the cockpit floor where the seat would wrap around to. This gave me the length of the panel I needed (the seat height is the same right around at 500mm with the top on), it also allowed me to take the measurements of where each curve would start and finish so I could mark out the kerfs and it also gave me the feel of where it would all fit. You can see the helm island in the pic below being shown out by the tape.

I have a panel in the walk through kit that is the correct height but is 660mm too short, so I have to glue an extension on. I found an offcut the right size and cut it to the right height and length and I glued it on last after I had cut the kerfs. I measured out the the kerfs in all the places I wanted the panel to bend. There are 3 small curves (all on the same side of the panel) and 1 very large curve (on the other side of the panel because of the direction of the turn) at the end of the helm base. Once all of the kerfs were cut I tested the curves to be sure they could make the shape I needed. It did as I thought so I glued the extension on and called it a day. All of this still took 6 hours. Tonight when I was typing up this page and looking at the pics I realised I don’t now need to make the island like it is in the pictures and I now have too many curves in the panel and it is too long. It will now go from the start of the island curve and from the middle it will extend into the back of the bulkhead and not back around in an island. I will fix it tomorrow and also try to figure out how to utilise the space underneath the raised helm box properly.

I also learnt something else today. The kerfs splinter because I have been using my battery powered saw. Either it does not spin the blade fast enough or the blade is blunt. Today I used a power saw as my batteries were flat and the result is a much cleaner inside radius because of far less fibre splinters. So my tip is use a mains power circular saw. 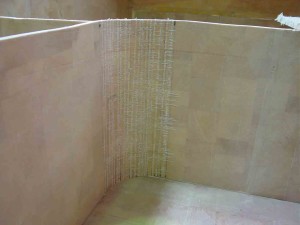 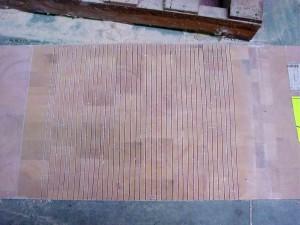 During the week I am hoping I can get the seat front panel in position so that it meets up with the port side panel ready to be glued in.