So first thing first, I cut away the bulkhead and cleaned up (grinder) the hull sides ready to glue and glass the soles in. I had previously put some pipe work in for waste water. Because the mast base is structural, I don’t think it is a good idea to have a 300mm round inspection hole in the glass pad that is the masts base. So I have lead all of the waste water piping back to behind the mast base glass so that a large inspection plate (under which will be a sump with an auto float switching pump) wont effect it and placed a sump there. From the sump I have also run a pipe back forward again through which the grey water will be pump to a holding tank behind the toilet cubicle and then it can either go overboard at the waterline via a gravity fed through hull or be held until I can.

In the ensuite there will be a shower and a basin that will both need to be plumbed out through the sole so there is going to need to be two 40mm holes, one a pipe to connect the basin waste inside a vanity cabinet, the other a drain in the floor for the shower, which go through the mast base glass but they are small enough to not be too much of a problem and the vanity cupboard will add some strength back. (The toilet plumbing is confined to the section in front of the bulkhead that forms the front edge of the mast base so nothing for the toilet under there, but if I had not moved it to the other side of that bulkhead there may have been, further complicating an already difficult job.) This plumbing is what makes this section more difficult to do.

In order to run the waste from both sink and shower out I needed a T join so that 2 go in and 1 comes out and in order to attach a shower drain through the floor after the floor is glued and glassed down I felt that the top of that T join ought to be threaded so I could screw the shower drain into it. Easy enough you would think. Bunning’s don’t have such fittings though, and whilst I did not try a specialist plumbing shop, I should have because the next option I tried decided as they always do, that if I am going to have the luxury of a boat I am going to have to pay primo prices for it. I have complained on this blog before about the prices of some lines at Australia’s 2 main chandlery chains, Bias and Whitworths, and boat plumbing is just another area they make top dollar. I guess I should not complain, it was because of the price of boating stuff that I decided to import hatches and am looking at other things I can import for boaters, but really, $50 for 3 small pieces of plastic and a meter of rubber hose? Come on guys, get real. Check out what I got for fifty bucks. 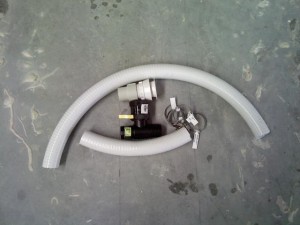 In retrospect I should have used pvc pipe corners, it would have been much much cheaper, but I thought I would have to connect the plumbing to the floor before I glued the floor down so I thought it would need to be flexible in order to allow that to happen. But after I purchased these parts and started to install them I realised that with careful measuring and placement I could plumb hard pvc through holes in the sole before it was glued in so the sole just slipped over the fittings. Anyway I used the flex toilet hose, the expensive part of the purchase I guess, at $25 a meter. It is designed for toilet waste and contains the odours.

Then as I was attaching the T join in place I decided it would be easier to screw into it if it could not move too much. And I also realised that there would be a chance that the shower drain could leak via its sides and if it did it would slowly fill the under sole area. So just in case I this does happen I have built a mini sump under the drain so that it is a much much smaller area that fills with water and cannot become a problem.

I also had another potential problem turn into a potential benefit. There is very little space under the ensuite sole. It is only 150mm deep, and with the T join under there with the shower drain screwed into it, I could not centre the drain hole in the centre of the ensuite floor as I needed more depth which I could only get by moving it aft, it is about a third of the way into the ensuite, not a big issue, but in order to run a pipe far enough aft to behind the mast base glass and for it to not be against the hull floor and still have a fall at the sump end (this enables there to be a margin of fill space for the float pump to operate in, then the pipe out at the ensuite end needs to be elevated a little so that the pipe has fall along its length and does not come out too low at the other end. This means that the rubber hose that connects the T join to the pipe runs slightly uphill and that the bottom of the shower drain is 80mm lower than the start of the pipe to the sump. What this will do is create the equivalent to an S bend under the shower. Water will pool there and stop any odour from the sump coming back up through the shower drain.

However, when underway the exaggerated motion up and down at the bows in sloppy seas may cause some of this water to splash back up into the shower, again no big issue, water in a shower base, but if I want to avoid that, I have used a drain hole that can take a plug. 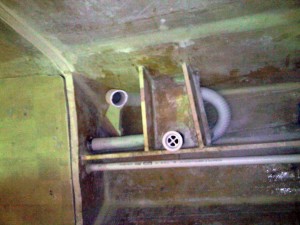 Once my under sole glassing is set I can finish the through sole fitting, which will require the holes to be cut and decoring and back filling to protect the balsa core from any water ingress before it can be glued down. Then once down I will have to glass around the holes. 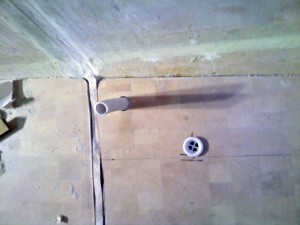 I got 70 hours work done this month, not even close to my goal of 90 hours a month. I really have to get closer to the target if I am ever going to finish this boat on time! It is now 4 years since the kit was first delivered (in August 2005). We did not start building the strongback until late September and did the first actual boat work in October so I am approaching 4 years on the build. At various times I have felt behind schedule, then optimistic that I was perhaps ahead of schedule. I am in a pessimistic mood again regarding build time and feel I am going to run over time budget by a year (we had originally planned on 5 years). I just cannot see the boat finished this time next year, and more likely late in 2011, unless I hire some help next year to knock some time off the build. The time quoted by Schionning to build one of these is 4000 hours. At the rate I work, I average 675 hours a year, which means exactly 6 years yields 4050 hours.

I am not upset by this realisation, it could change again as I go by getting a good run at it for a while, it hasn’t happened so far but it could. Perhaps my work workload will come down and I will be able to spend more weekday hours on it. I am still enjoying building and the financial meltdown lost me about 25% of my superannuation’s value (I now have less money in it than there was when I started building 4 years ago!) so it is more than probable that I would not be able to stop working for a few more years anyway. Jo and I still plan to semi retire to the boat and hopefully run our business’s from onboard, utilising a third party delivery logistics provider. Either that or one of Jo’s sons might want to take over and pay us a pension and keep the rest or we sell
the business’s down the track, but that is way in the future. Right now I have more sole work to do.