Today I glued the shower base sole into the starboard hull, closing off the under sole plumbing forever. As I did on the port side, I buttered glue onto the pine stringers and duflex web and carefully placed the sole into position, pulling the vanity sink drain pipe through and then equally careful not to get any glue on it, I screwed the shower drain through the sole into the pipe work below. This was particularly important because if the sole sets even a mm out of position i wont be able to screw the drain in later. I screwed some screws down to ensure the sole could not move and I pushed glue down the sides to complete the filling. I then decided it would be easier to cove the joins now and sand them for glassing over rather than glassing to wet coving. The reason for this is I will have to glass around the through sole fittings and that combined with how difficult and slow going it is anyway and the fact the weather is warming, I thought the less I had to worry about when glassing the mast base the better. 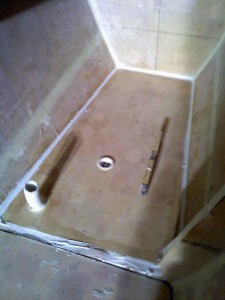 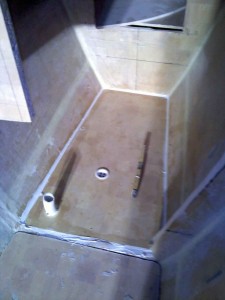