During the week I trimmed the overhang of the port dagger on the outside of the hull, at the same time removing the copper epoxy and bog back down to glass so that I can glass the cases glass to glass on the outside, re-bog it, re-fair it and re copper epoxy it. I ran a straight edge over the opening up and down and fore and aft so as to be sure that the case was trimmed flush so that when done it will re fair to a flat hull panel. I also had to make the edges curved so that glass would stick to it all the way around.

Today the first thing I did was to give the port dagger case on the outside of the hull a coat of resin. I want it to tack off during the day then later in the day when I glass over the joins the glass will stick better to the tacked off resin as it goes around the corners. It is important to get a good smooth adhesion of the glass with on air bubbles or kinks in the glass. The clearance inside the dagger case is only a few mm all around so the glass has to go down as well as I can get it so as to not close that gap between the case and the dagger too much.

The next job, or the main job for the day was to glue and glass in the other dagger case. As last time I started by wetting out a uni rope and pushed it into the de cored edge of the case through hull cut out, then I buttered the leading edge of the case that meets the bulkhead and I put the case into place, adjusting the height so that only a couple of mm of case protruded out of the bottom of the hull, and for plumb and square and clamped it in place. I then coved the joins using a long thin strip of ply with a rounded end. Last time I used a piece of conduit but I found the ply easier to control I could reach down the inside (hull side) join and cove it top to bottom with the extended coving tool and also along the inside hull join. Of course coving the outside (companionway) side with a regular coving tool. I pushed glue down into the gap through the hull from above and below to ensure no voids. I then glassed all of the joins. For the hull side I used the conduit to apply the glass as I did last time. I used the detail roller down inside as far as I could reach. 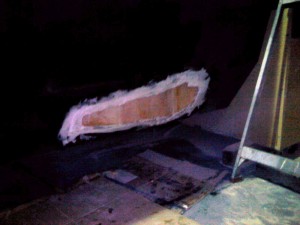 Glassing to the bulkhead on the companionway side is again very easy as is glassing to the hull. I then smeared a little more coving compound around the join on the underside of the hull.

I then glassed and bogged the port side hull exterior joins on the tacked of resin coat from early. It worked well. There are a number of angles and tight joins so I needed to cut a number of small pieces of glass and overlap them in order to go around the various corners without the glass wanting to lift or crease. Once I had 2 layers of glass all around the edges I let it tack off for a while and went on to another task for day. I need to bog this glass while wet but I need it to tack off so that it does not move as I apply the bog.

The other task I had set myself for the day was to re position the forward doorways in each hull, through to the robe on the port hull and ensuite on the starboard hull. The reason the doors are being moved is that the masts have been repositioned from outboard on each hull side to inboard down to the chamfer panel and the masts would protrude into the doorway if I don’t reposition them out toward the hull sides. An easy enough task, cut out the new doorway side and glue the piece taken out back in on the other side. 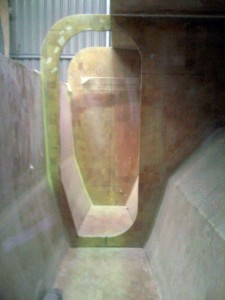 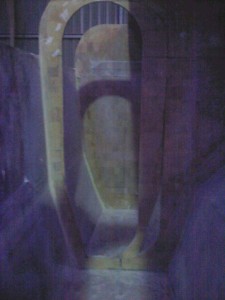 The method for marking and cutting the new door position was to get a piece of mdf with a straight edge and run that down the hull centreline against the bulkhead (the doors are centred on the hull centreline) and mark out half a doorway profile and cut it out. Then using the template I moved the doorway the correct amount as per the revised plans I have been sent and re marked the new door cut out, and cut it. The plans suggest that because the door is moved close to the hull side that the normal curved bottom cannot fit and 100mm of bulkhead must be retained so a straight section 100mm parallel to the hull side is called for.

Once cut out, the piece that came out is curved exactly like the other side of the doorway and can be glued back into the other side to complete the door relocation, well almost, because of the straight edged cut out, that will need another piece cut out and glued into the space it will leave but I decided that would be easier once the rest of the panel is glued in. I have plenty of offcuts to make the small pieces to fill the gaps. Once I have these small sections glued in too I re-glass the panel each side to complete the re position. I also still have to de-core the edges and back fill with uni rope but then I have to do this for all the doorways anyway.

The the last thing I did today was apply some bog to the glassing of the port outside hull joins. A good days work, I got a lot done. I am getting close to being ready to close the hulls up. I just need to glass the reinforcing into the hulls for the mast posts and then I am going to close it all up. By the end of July the hulls will be closed.