Slow progress on the roof at the moment, much to my frustration. When you are building an exciting section of the boat that will dramatically alter the look of the boat, you want to finish it as fast as you can so that you get the benefits of that high visual impact. When small things get in the way and stop or slow progress it is all the more frustrating. There are 2 reasons for the delay at the moment. Well 3, a lack of time to dedicate to the build being one of them. The other 2 reasons are a lack of material. I ran out of duracore and I simply don’t have enough money at the moment to buy as much as I need. I used some of it to plank the foredeck that I already had duflex for, which means I still have the duflex. I will be gluing some duflex panels together to get the length I need and then cutting that up into strips to use instead of duracore and I have some material arriving next week that will also solve this problem. More on that once it arrives. I may also need to glass the joins in the duflex unless I build my own z joints so that the join can withstand being bent around the roof curve.

The other problem I have that is slowing me down is that I have some fairing irregularities with the frame mold that I would rather get out before I glass it so that I don’t have to bog and sand the bumps out too much later. I have checked and rechecked the positioning of the frames so I cant figure out how I have the hard turn on the roof, I have also tried a variety of kerf spacing’s to see if that would alter the curve but it is still there, perhaps there is no way to get around it and that kerfing is an imperfect art and eventually bogging them out is inevitable. The roof looks fine from the front and once the curves left to right start to happen on the sides of the roof perhaps this will also minimise the effect of the fairing irregularity. It is also probably only a couple of millimetres of bog to fix it but the instinct is to try to avoid that. I just want to be sure before I set it solid by gluing and glassing. 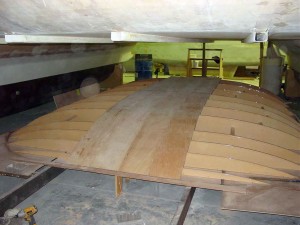 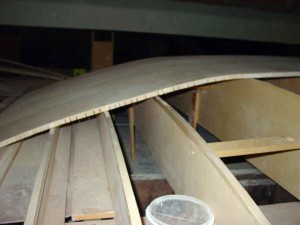 I am hoping to have this planking finished before the end of the month. And with any luck perhaps even have the top glassed. We have very cool weather at the moment and it would have been a perfect time to wet out such a large section of glassing. No doubt Murphy is watching and the moment I have glued the strips together and have ground out the excess glue smoothed ready for the glass and the heat will return!