Shower base glassed in 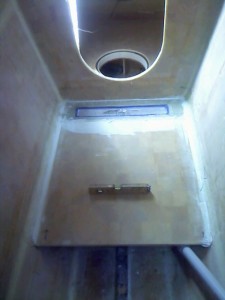 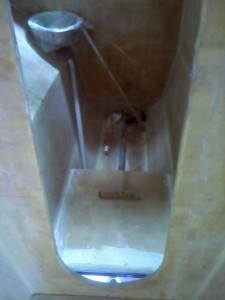 With the shower base in I moved to finish the black water holding tank that will now be behind the shower side wall and be glassed in permanently as opposed to being removable as I had been planning previously. The black water tank has an extra plumbing point that the other tanks dont have, in addition to plumb in for filling and plumb out (for emptying overboard) and a breather that all the tanks on board will have including the freshwater tanks, this tank had an additional plumb outlet for use with vacuum suction facilities that marinas and jetties have for emptying in port. This pipe has to start about 1 inch above the bottom of the tank and have an angled inlet so that it cannot be blocked easily, and then through the sealed tank lid and out to a hookup point on the outside of the boat so that the port facility vacuum out hose can be attached. Our vacuum attachment point will be on the back steps so that should there be any leakage, it is an easy hose down to clean.

I had previously lined the inside (and the outside) of the tank with white epoxy, I needed to key that lining so that glass would stick to it to glass the suction out pipe in. I decided to make the lid out of 9mm plywood. More because it was easier as I had off-cuts to the right size available. So once I had made the part, I glassed the inside, then once it is glued on I will seal it all by glassing the outside.

The tank with its fittings all in place is then positioned onto the chamfer panel so that the plumbing pipes can be fitted through the bulkheads and pipes fitted to panels so that it all works to plan. I decided long ago that the toilets already need pumps whether electric or manual to pump waste out of the toilet itself so it does not make sense to me to have the waste tanks under the waterline so that another pump is needed to pump the waste overboard. By having the tanks up higher than the waterline gravity is all that is required to evacuate the tank saving the need for another pump and the electricity needed to power it. My only concern has been that the toilet pump is capable of lifting the waste to the top of the holding tank. Its about 1.5 meters up and about 2 meters from the toilet now that the tank is relocated to behind the shower, I dont think the pump should have any issue with that. 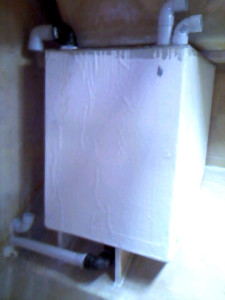 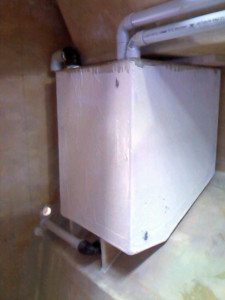 Before the tank is glassed in I just need to have the copper gas line plumbed in as it travels behind the tank from the bottle on the duckboard to the cook top in the galley. Then once the tank is connected up and glassed in the side wall can be glassed on and the back wall with doorway also glassed in to complete the shower construction. The pipework above is not glued or glassed in yet as this is just a dry fit, but will be before the shower side wall goes on. The top 2 pipes are for pump out on the far right, then breather which will go along the wall then across the hull at the bulkhead then up into the mini mast I will fit to hold the wind generator (there will be a matching mini carbon mast on the other hull to house the radar dome, gps antenna and vhf antenna) and then exit at the top of this mast to keep the smells up high. Because the tank was originally made to fit at the other end of this room the chamfer shape, height etc is just slightly different enough to need some packing to make it a tight fit again before glassing it in. Other than that, this relocation is much better, its a better use of available space and much better for the pump to get the waste into the tank.

Another disappointing months work and I calculate that I have lost the combination of just under 2 months hours so far this year. I have managed just 110 hours in 3 months, when ideally I should have got to about 200 hours. I am going to give up making bold predictions of how soon I am going to finish this boat because Murphy does not like it much.