Shower base, drain and web.

The bathroom in the Port hull sits behind the wall that makes the stairwell and under the galley. In that room will be a vanity basin and toilet (and an escape hatch) and through the main bulkhead (where most other boats of this design have the bathroom and shower) will be the shower with a door in its back wall and behind that door is the laundry where we will have a mini washing machine, water maker and water heater, probably gas instant. It was also going to house the black water tank in a cavity under the cockpit seating, but I was thinking about it and decided to move the tank closer to the toilet. I was a bit concerned about the toilet pump being able to push the 4 meters to the tank and the 1.5 meters up to it (remember pump in, gravity out). So moving it to the cavity that will be behind the shower side wall makes much more sense. Originally I was going to put the water maker in that space, but that would have meant having another doorway cut into the shower side wall. One less door means less work and will look much nicer.

Another advantage of moving the tank to behind that shower side wall means I will glass it in. I originally had it in my mind that I might need to remove the tank for maintenance and had to figure out how to get to it and how to get it out and keep it in. I had thought that having the tank closer to the pump out point that I will fit to the outside of the boat at the rear steps made more sense but now I realise that the pump on the vacuum dock system will be far more powerful than my pump up from the toilet. The really big advantage of having made this decision is the space it frees up in the laundry, so much so that I now have room for the washing machine and a laundry basin. The water maker still fits on the chamfer panel in the laundry in front of where the basin will be. And the shower side wall will add to the strength of the glassing that keeps the tank in place.

So having decided all of that, I glassed the tank supports in place. The pic does not mean much on its own but once the tank goes on and is glassed in it will all make sense. Next I glassed a keelson into the space that will be the shower and laundry. Even though there will be a web under the shower that would also strengthen the hull (the purpose of the keelson) I decided that there is a keelson in the matching section (under the starboard rear bunk) so for the very small amount of work and for symmetry I glassed in a cedar keelson. 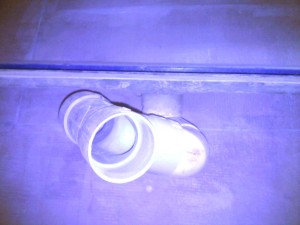 I had already made the glass drain section and glued (pipe glue) a T section into it to accommodate the laundry drainage that will go past the shower drain and together they go into the sump that is on the other side of the bulkhead under the bathroom floor. The reason the sump is not under the shower is because I have put the shower base a bit lower than the bathroom floor so that we get more headroom in the shower (so the water has some fall and still hit us on the top of our heads) and because of this the sump would not be very deep. Either way a pipe or pipes would have had to go through the bulkhead, either from a sump under the shower to the holding tank behind the dagger case (and another one back) or in this case the shower and laundry drain through the bulkhead into the sump then up from the sump to the holding tank then back again to the through hull that is in the sump (so that if it leaks it is in a sealed off section that can either fill as it is below water level but sealed from entering the actual hull or the sump pump will send it back through the system and out again, so long as the pump can keep up it wont fill the sump but either way is safe). Also in the sump is the tri data sounder temp and log transducer). Again from time to time you pull the transducer up through the through hull into the boat, some water comes in until you get the plug in, this water will be into the sump so I wont panic as much doing this). The reason to do this is to service (clean) the log wheel from weed or growth if it stops turning. I assume you would know straight away if it is fouled as the speed over ground would go to zero even though the gps would show the speed and the plotter would show you moving along the map. Anyway, the systems on paper at least make sense to me. 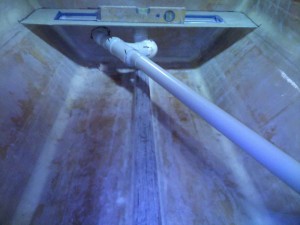 The webs for the shower base have 2 functions. Firstly they give the base a solid footing so that it does not flex underfoot. But the height of the web cross sections have a staggered height so that at a flat calm the base is higher at the aft end of the shower so that water falls down the base into the drain grid and down into the sump. We dont want water pooling in the shower. Of course what is level on a flat factory floor (or slightly inclined) will at one moment be inclined the wrong way, then level then inclined correctly and so on, but you have to put it at some angle so it may as well be the right one for what you want it to do. I guess what that all means is that whilst not super critical, it is easy to cut each web so the angle works for what you want it to do. Then it was a case of cutting in the plumbing and dry fitting it all before glassing it all in, because once in and the base on its hopefully buried forever like any household plumbing is. I quickly learned for example that to get that pipe in I had to make an extra wide hole in the middle web, then push the pipe around to meed the T join then I can glass a piece back in to make it all solid so it cannot move before gluing and glassing the shower base on.