Setting Up The Shaping Jig

This month I should finish the daggerboards and their cases. I will also try to get a few more of the dirty jobs done so that next month I can start to close the shell up. 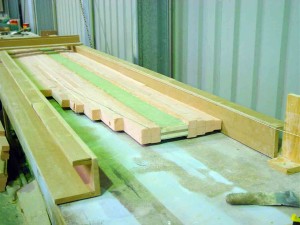 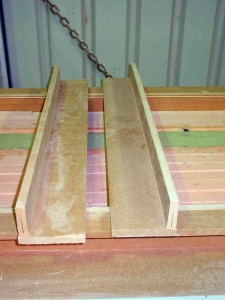 Once the jig is secured to the bench I will then secure the blank inside the jig. It just needs to be level on the bench and square to the rails so that when I start the router at one position and one depth on one end it will be the in the same position at the other end. It will be more difficult to do the other side once one side is shaped because then the blank needs to be secured with a curved surface on the bench so to keep it secure I will need to use the female moulds as a cradle. The male moulds will stay attached to the blank until both sides are shaped.

The top sliding rails will be joined to each other with cross rails that will be placed so they act as stoppers inside the main rails to stop the cross rail from moving forward and backward (blocked against the inside of the front and back rails) so that the only movement is along the rails. Then it is a simple matter to clamp the router to the rail. The plunge router is then set to depth and locked off and run along the blank. After each run I move the router and reset the depth to the mould on the end and do another run. The actual shaping will take a fraction of the set up time, but all of the set up and shaping combined will still be a fraction of the time it takes to shape a blank by manual planing or sanding.