I have stated sanding the starboard hull. I know I am starting to sound monotonous on this but sanding really sucks. I hate it and I can’t imagine anyone liking it. It is tiring, dusty but most of all boring work. I find myself daydreaming a lot while I am sanding. Mostly about launch day or the first shake down sails. Anything to pass the time. I also find that a couple of hours in one go is about my limit, although I managed 4 hours today (and 2 hours yesterday). I am also in a bit of a race against the weather now. I really want to finish the fairing before the really hot weather arrives as I really don’t want to be sanding when the temperatures start hitting the 30’s and above, which I figure is about 6 weeks away.

Right now I am using the power sanders, the 2 orbitals but mostly the Bohler. I have sanded just under half of the outboard side of the hull. I have sanded for 6 hours on this hull so far and I figure 8 hours (2 more hours) will see me at a quarter finished (sanding the bog layer fair) so that means about 32 hours sanding the bog. That isn’t the end of the sanding but the highbuild is easier to sand (although more hand sanding on the longboard is involved).

The idea with the sanding is to sand away the highs until the lows disappear also and the surface is flat. The bog follows the contour of the surface below, so that even though it goes on smooth from the trowel when wet, it eventually dries in the same shape as the surface below so that there are highs and lows to the contour of the glass below. That is why the glass tapes are still visible through the un-sanded bog as in the picture on the left below. Once you sand the highs away the the tapes start to disappear at least to the touch as they stay visible through the thin layer of bog after sanding.

When sanding the bog away from the tapes and edges of the glass, the idea is to apply the bog and then sand it flat in a tapered away to nothing edge. In this way the edges wont be visible. I have made some sketches to show what I mean. I am not a very good drawer but this is pretty basic stuff so I am sure you will get the idea. The first illustrates how the bog sets to the contour of the glass below, the second is the idea of sanding the bog flat, the third explains the idea of feathering away the tape and glass edges by tapering the bog away to nothing.

I have started with the outboard side on purpose because after hours and hours of sanding there may be the temptation to cut corners or to say close enough so best to get the most important side done first, the most visible is the outboard above water section, the under bridgedeck is not as visible so if I do get complacent it may not matter as much. I don’t think I will but best to be sure. 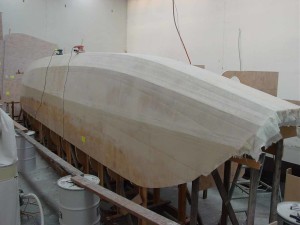 What I did last time was to do everything and anything to avoid starting the sanding until there was nothing left, then I had to sand and sand until it was done. This time I am going to do a few hours sanding, then tape some internal joins for a day or 2, then sand some more, etc. This way it will break it up a bit and may not seem so tough a job. So tomorrow I may get another 2 hours sanding then do some taping.