I have managed an hour each night this week, and in that time I have managed to finish glass the curved fascia end at the starboard stairwell which completes the shape of the saloon seating at that end leaving just the island chaise at the port end of the lounge to go. After that is done, it is on to the kitchen cupboard. Actually next should be the fridge but I don’t yet have the insulation material, I have not settled on what I will use yet and even if I had, I have just spent my kitty on a chart plotter bargain that was just too good to pass up, more on that when it arrives next week.

I have decided on ply as the seat top and lid material because it is much easier to work with in this instance than polycore or any cored material. There is meters and meters of edges that would need to be de-cored and backfilled with a cored panel, and for a slight panel saving in weight some of it is lost by having to fill the edges. And whilst it may sound lazy, that is a hell of a lot of edging work when ply does the job just as well for only slightly more weight. Ply also has better compression and resistance to sharp point loads, not that I think this would ever be an issue with upholstery and padding, but I just felt on balance that ply was the best way to go.

I have cut all of the various pieces of ply in strips, rather than cut the full panels to size then cutting the lids out of the panel. I am making the edges of the top out of strips from a sheet and then I will make the lids later. I am using up off-cuts this way. Next step now that the cut-outs are done is to make matching shaped strips that I will glue and glass to the underside, this forms the lip that holds the lids from falling through. Then once all of the strips are in place I will glue and glass the top to the sides and the lounge is pretty much done, just a coat of white epoxy to seal and finish it.

I have also trimmed the daggercase to the port deck, I still need to glass and seal the deck around the daggercase inside and out. I used analogue technology on that. It reminded me that I had forgotten to report that whilst I had legitimate reasons to not attach the side decks (air and light) I was also putting off a difficult job, and one of the difficult parts was trimming the forebeam. 6 layers of glass and cedar planks were proving difficult to cut with a jigsaw, until I gave up on that and used an old fashioned hand saw. It worked much better and did not take long at all, so again my fears had me putting off something that took minutes to resolve. 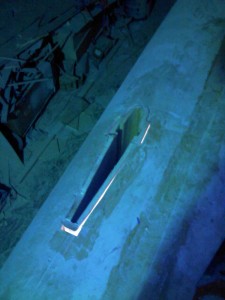 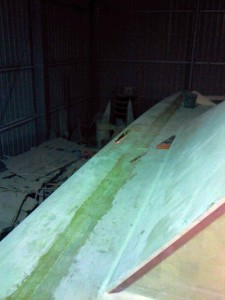 Next weekend I will start the process of gluing and glassing the starboard side deck to the hull. Sometime in May I hope to have work start on fairing the hulls so I need to have both side decks completely closed up by the end of April. So far so good. And more furniture work is also fun and rewarding so I am enjoying the work on the boat very much this month.