The bog was not fully set enough today to sand it so I will start on that tomorrow. Today I made the stern stiffener ends, tapering out. I had originally planed to make these out of foam that I made with the pvc as a mold. I made one plug from the foam very easily, then I tried making one from the pvc I have left over. It was also easy to make though not as easy as the foam but in the end I decided that because the foam is flexible and can bend I would save the foam for the forward sections as these will be curved around where the deck curves up.

So having decided to use the pvc, I cut the 4 plugs to size and fit. I drew a square line where all of the tapers would meet, I contemplated having them follow the curve of the duckboard but decided to have them all end at the same point. Once they were all cut and dry fit I glued them to the deck and coved them while the glue was till wet, which required being very gentle when applying the cove so that they didn’t move. Then whilst it was all still wet, I glassed them, being careful not to ruin the coves. This worked out very well because I used filler to ease the transition from the end of the taper to the flat deck. It should fair out very well. I peel plied them all ready to sand and fill where needed tomorrow, ready to paint on Tuesday.

We drive to the Gold Coast on Wednesday so I wont have the deck up before I go but at least it will be very fair and smooth. I will paint it gloss white but I will be making the 3 sections between the stiffeners textured so that it is non slip. Of course I hope it will never ever be needed but it is the safe thing to do. I also want to practice a technique that if successful I will use on the non slip areas on the decks. I plan to give it a coat of paint then a second coat but I will first roller down a sheet of plastic fly screen and remove it again as the paint starts to tack off hopefully leaving a uniform grid pattern non slip surface. 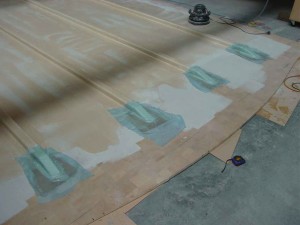 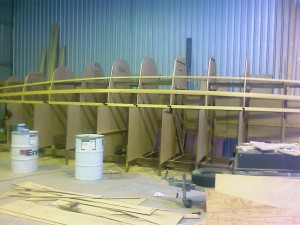 I still haven’t had a chance to create a new page for Nine Lives, which I promise I will do soon. In the meantime, the panels have been taken back off (as with my build they are dry fitted first), stringers glued in and the panels are in the process of being glued back on.