It is amazing how time consuming some jobs are. They don’t look like much but they take hours. Today I worked for 6 hours on gluing down the seat front and starting on the coving and taping. Before I started on the taping I put some bracing in under the boat to ensure that my weight did not cause the deck to sag and be glued with that sag, I figure it would be better to keep the deck flat. I doubt there would be much movement from my weight but better to be sure. There is still some movement in the deck when I walk around on it but the furniture will stiffen the floor up.

After bracing under the deck I started to butter the bottom of the seat front with glue, then once that was done I buttered the front of all of the seat uprights and lowered the seat front down into place. Because the seat back is curved it is difficult to get it into place without getting some of the glue on the deck where it will not be glued to if you are working alone.

I had pre-marked the deck when I dry fitted the panel so I know where the seat front should be. I attached the 2 ends to the bulkhead and worked around along each side until the seat was glued and screwed down up to the 2 rear corners with just the curved sectio to go, and then I went to the middle and pushed that in and screwed it down and screwing down to the rest of the uprights was easy. I then scraped off any glue that got smeared out of place and using my finger made a glue cove and removed any excess and filled any gaps. 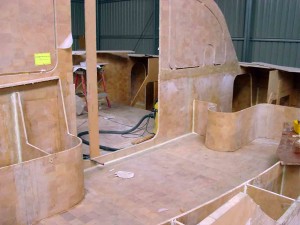 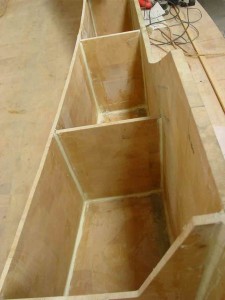 I had lunch for about half an hour and then started on the coving and taping. I have managed to cove and tape all of the inside edges, both along the bottom and up each side of each upright, effectively sealing each compartment. The seat top will enclose them and then, I wont be gluing that down all over as some parts of the seat top will be hatch lids into each compartment, so wherever there is balsa edge exposed I will need to core out and backfill.

Nine Lives is slowly being faired. The backfill has been sanded back to almost fair. The way they check for fairness is to spray a mist of black paint (auto black) on then sand it off, any area that stays black is low meaning they need to keep sanding until it is gone or back fill it more if it is too deep, the lighter areas of black (grey) are almost fair.

Tomorrow I will cove and tape the 8.5 meter long seat front in one continuous tape and the last few areas I didn’t get to today. After that I will start to find the parts to make the seat tops and backs and glue them together (I will need to make them out of the parts left over from the walk thru kit) ready to fabricate the tops and back. Once that is done I will need to get back to some of the parts of the build I have skipped or avoided, such as the keelsons and fairing the forebeam. I really want to make the cabin top but it would be better to wait until Nine Lives is launched in a couple of month.