The weather is warming again and it is still very humid. But not as hot as it has been and bearable, however it was still warm enough to mean I had to hustle to get the taping done before the resin went off. I decided with such a long length to wet out (the front of the seat is 8.6 meters in continuous length) that it might be easer to wet the tape out in the wombat, but whilst it did mean I worked faster it put pressure on me that would not have been there if I wet out with a brush as I went. That said I got it all done and am happy with the job I have done. It is the best coving and taping I have done so far and good timing too as it is also the most visible so far.

I had a visitor today so I waited until he had gone before I started the taping, just so that I was not half way through when he arrived as you cannot stop once you start. It is always fantastic to get visitors and to chat about boats, today’s visitor has already built a Waterline 1320 cat and has extensively cruised the Pacific so it was great to chat to him. We had read his story (written by his wife) in Multihull World so it was nice to meet someone we had read about doing what we want to do. He is living on board his boat with his family, in fact he is living our dream!

Honourable mention today for Jo who decided to come in and help today by vacuuming some of the dust in the shed that has been building up for a while especially since Nine Lives started to be faired. It is a full time job and not a fun one, so I am very grateful. The strangest thing happened while Jo was vacuuming, she screamed and dropped the vacuum saying she had an electrical shock in her foot. I checked everything and it all seemed fine and I used it a while with no shocks. The as soon as Jo touched it she was shocked again. Apparently the fibreglass and resin dust going up the hose creates a static charge that builds up and then when you touch something that grounds you it zaps you. She was continually zapped for the next hour or so. 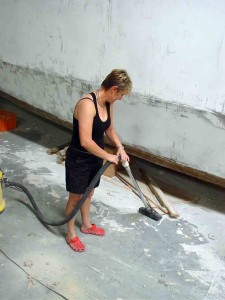 Then once the coving was done I changed gloves, I find that a couple of hours with the same gloves on and my hands sweating inside them and they look like prunes and need a few minutes to dry and recover. I mixed up a little too much resin in the wombat and wasted a few pumps worth. I hate that. It just went off in the wombat before I could use it all, I got the long tape through it and another smaller tape but I could feel it getting hot on the roll so decided that I was better off getting the wet glass off the roller and onto the boat before it set on the roller. The tape super heats much faster when tightly rolled on the roller than if it is unrolled so I got the tapes unrolled roughly in place as fast as I could to slow the set off, and then got a brush and mixed some fresh resin to use the brush with resin on to push it down into the cove and against the panel and to get the air bubbles out. I went to the wombat to see if I could use the resin in the bag but it was rock solid!

Once I had all of the glass down and wet to the panels well I got the taping roller to roll out any remaining air bubble. So another 2 hours with the gloves on and I was relieved to get them off. And I had really moved fast, time seems to fly when you are under pressure. The 8.5 meter tape took an hour from the time I filled the wombat to the time I had the last air bubble out. The rest of the tapes took another hour, the rest of these I wet out with the brush on a flat offcut before applying them to the job. The one thing I probably should have done that I didn’t was to put down some peel ply or to apply a thin layer of bog. I didn’t have any ready and just forgot about it. It is not a big deal, it just means I have to give it a sand up to get the bog to stick. I only have to fair the seat fronts not the cockpit deck as I will be laying cork down and this will negate my need to fair the deck. I may still need to give it a bit of a sand to remove the inevitable spills bound to happen over the next year or so.

So with the cockpit seat front finished save for some sanding of the tapes inside and out, I will start on the seat top and back although I may not glue this in for a while, I will just need to have all of the panels made to shape ready to. I am particularly pleased with the way the cockpit is working out.