The join in the bedroom wall had set so I could continue working on it. Yesterday evening I almost bunked off early before glassing the other side of the panel. I was concerned that the first side tape had not fully set (it hadn’t but was rigid enough to move) so was going to leave the other side until today but I carefully turned the panel over and taped the other side, meaning today I could continue on with the doorway. So just an extra half hours work yesterday enabled me to continue whereas bunking off early would have meant that today all I would have done on that job was glass the other side.

The first thing I did after removing the peel ply and feather sanding the tape edges away was retry the dry fit. I was confident of a good fit but you never really know when gluing parts together that the full panel will still fit well, but I had another concern, I wasn’t sure there was enough clearance to get the full size panel back into place. My fears were unfounded, it fit back in ok but more importantly the fit was very good. As I often do at major changes in appearance, I sat back and admired the new look of the build. This wall completely changes the starboard hull stairwell and the perception of room. Needless to say I am pretty happy with it.

The black line in the pics is the mdf tongue used to stiffen the join. It worked well and the panel is quite stiff. I marked the boat where the wall needs to be and removed it again to start working on the door. This presented an interesting question. All of the doors in the boat are 500mm wide with rounded tops and bottom. But all the other doors on the boat are square to the centre line. This door is angled at about 30 degrees. The reason this caused some consternation is that a 500mm wide door is not 500mm wide when you angle the panel, it is less than 500mm depending on how great the angle is, and because the angle is not so great the door would only need to be about 530mm to be 500mm wide square to the centre line. If I did not increase the width your eye still sees a 500mm door albeit you can see the angle but unless you turn to go through the door square to it, it is actually less than 500mm wide. Now on a boat, because the doorways are narrow you tend to go through them sideways anyway. So I did think for a while whether to make the doorway a little wider to compensate, but in the end decided against it. I didn’t want it to look out of place and as I said I don’t think you would walk through it square to it anyway. 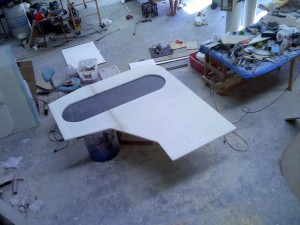 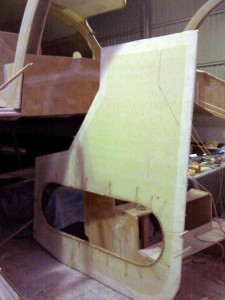 So with the decision made, I marked the door on the panel and cut it out. I did have to move the door inboard 30mm, the other doors are all 300mm from the hull side (on the upright panel) but because the aft bulkhead will be attached at an angle and because there will be a bench top meet the panel I had to move the door out slightly so it meets up at the same distance from the door edge as the bench tops against the other doors on the square bulkheads. I hope all that made sense.

Once the door was cut I routed the edge and using the die grinder I de-cored the inside edge of the doorway (I will also have to do the door but that will be later) and prepared a length of uni 400mm wide by 4 meters (yes that’s right, these doors are 4000mm around), wet it out, rolled it up into a rope and put it into the de-cored edge in my usual method, using clear tape covered mdf strips secured with elastic bands held taught by putting screws through the panel about 100mm from the edge and stretching the elastic band from one side to the other. Then to finish the panel off, (I had previously de-cored the vertical edge) I back filled with filler compound the vertical edge of the panel that will form an edge that a door will butt up against once I build the cabinet that forms the extension of the bulkhead up on the bridgedeck.

Then using a borrowed router I removed the core (and top layer of glass) from the deck where the mast will be. I set the plunge router to just less than the depth of the panel and plunged it in at the middle point, the theory being that if I misjudged it and pierced the inside skin that would end up being cut out when the mast post goes in anyway. I had it set correctly, if anything not quite deep enough leaving about 1mm of balsa on the bottom skin, which I removed with a chisel. You need to get down to the skin so you are gluing the play to the glass and the bottom layer of glass on the deck will also adhere to the ply. I did pierce the skin at come joins that I had not glassed underneath, and will now need to glass those gaps on the underside. It will eventually have a number of tapes (4) taping the post to the underside and topside of the deck but I will also need to clean those holes up with another tape so that the glue does not drip from the holes into the hull. One other tip when removing the core with a plunge router, you have to start at the middle and remove the core as you move out from the middle. If you try moving the router without some kind of plan you will run out of core guiding the router to the correct depth. I had to do some of the first one freehand as I did not have any core left to rest the router on to keep it from going through the bottom skin. The second one I went from he centre around and around making a bigger and bigger hole until I had the size hole I needed. 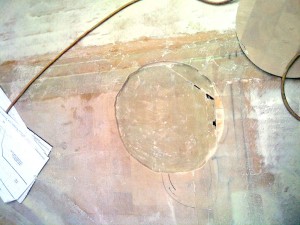 So during the week I hope to cut the play pads to size and glue them into the de-core holes I cut today and get the glass down as soon as I can because before the glass goes back on this is a weak point and I am just dumb enough or clumsy enough to step in the hole and end up crashing through the bottom skin. And of course I will clean up the doorway edges and get that panel glassed into the boat, then later in the month making the electronics cabinet and the cabinet that goes from the back edge of the dagger case to the new wall. All interesting work.