With the template made to shape fitted in place to set the size it was just a matter of deciding whether to run the panel vertically and add a join vertically or run the panel horizontally and have a horizontal join in the hull about 600mm up. I decided it made more sense to do the latter, for 2 reasons, firstly the amount of waste in running the sheet horizontally was minimal and made much better sense. If I made the join horizontal the full wall is about a panel and one third, but if joined vertically the wall would take up about a panel and a half and have more material wasted in off-cuts. The other reason was that at 600mm from the sole 300mm of the join fell inside a cupboard and 500mm would be cut out of the panel with the door, so in the end it would be much easier fairing just 500mm of visible join than about 1200mm if I ran the join vertically. The door will need fairing but that can be faired on a table off the boat, much easier.

So I marked the shape onto the full panel and only had 3 cuts, one the curve at the top left corner that fits the curved side deck and then the chine at the opposite corner. And then it was very easy to cut it. I dry fitted it into the hull, and trimmed it where I needed, ground the angle into the edge that ran up the hull side and around under the deck, angled because the panel runs off at an angle not square, and once I had done that it fit pretty well. I screwed a piece of timber to the bottom to act as a leg to hold the panel up in place while I fitted the bottom part to it. I then marked the smaller part of the wall from the template, onto another panel and cut it out (about a third of a panel) slightly oversize so that I could set it in the boat and trim it back down to exact size.

With the 2 parts of the wall cut to size it was just a matter of joining them into one panel. Normally a butt join and glass each side is sufficient, but I decided I would try a tongue and groove join. Pretty simple really, I just de-cored the panel edges and glued a strip of duflex into the join each side and glassed it each side. The bulkhead is being made from 25mm polycore, the furniture panels are 19mm polycore. With the core removed the 25mm panel is about 22mm internal gap and I had some 20 duflex so with a sloppy glue mix it fitted pretty well without bulging the join out, I tried some 23mm but it was just too tight and pushed the thin glass out so that when finished the join would sit proud and be much harder to fair out to invisible. I glassed one side, then had some lunch and went on to some other jobs, then before leaving for the day, the first tape was set enough to turn the panel over and tape the other side. (The other job I started on was de-coring the area around the port mast ready to glue a ply pad in but my router stopped working so I could not get much done). 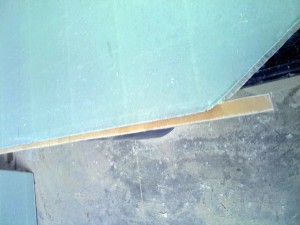 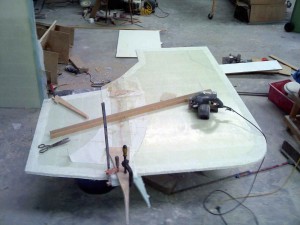 Tomorrow I will mark and cut the door out of the panel and decore the edge and glue a uni rope into the edge. I will also decore the door edge and back fill that just with filling compound (it does not need the stiffening that the panel needs. Then once set I can later in the week I can glass that panel into the boat and continue on with making the nav station/electronic cabinet. Hopefully I get another router and keep going on the mast plywood plug and glass the deck so that the guys that will be fairing the boat wont have to wait for me to do that if they start soon (not likely to start for a few weeks so I have time).