Rear bunk base glassed in.

Have you ever had a big job too do and it is so big you put off making a start? I started to feel that way late last month. There are just so many different tasks to complete on the internal fit out that I couldn’t get my mind around a plan of action and I would jump from one task to another without really getting much done on any of them. In the end I settled on the rear bunk and got a start on getting the bed base down.

Under the rear bunk is a massive storage area so the top of the bunk needs to be removable so as to easily get things in and out of storage. We have in mind that we might like to have a motor scooter, like a CT100 postie bike. There is enough room in the storage area for it to stand and be strapped down upright but to get it in and out we would need a long hatch in the deck. We could then lift it out using the boom as a crane and swing the boom out over the dock to lower it. We figure if we stay at a place for a number of weeks it might be handy to have. There is a cool 125cc bike called a Sachs Madass that is 100kgs and is very slim, the tank is in the frame.

So with the future possibility of hauling a bike out it I have set about designing and constructing my bed base storage area lid. First I had to decide the height I needed. For that I was more dictated to by the width I wanted. There is a definite design fault in the 1230 layout. The plans indicate that you can have a double rear bunk, but because of the chamfer panel and the width of the hull at the height of the original bunk entry in the bulkhead, the bunk would only be a king single at best. So we needed to first add in some duflex to the bulkhead to raise the bunk height entry, which I did last week. I also added the duflex to the saloon cockpit doorway, we decided to reduce the doorway from the original 1200mm to 900mm so as to have more usable kitchen bench space.

Some readers might recall that many months ago (before I strip planked the side decks) I added 200mm to the top of BH7 so that I had more depth in the outboard wells in order to accommodate the outboard lifting well clear of the hull in the raised position so some kind of internal door can be fitted so as not to have the standard plate attached to the outboard skeg that adds drag when motoring. Well this added height has had an added benefit or more accurately has proven more needed in the aft bunk. With the increased height of the bed base, if we had not have raised the deck height as a result of raising BH7 then there would barely have been 500mm headroom in the bottom bunk. I assume people would put their pillows at the aft and climb in head first so this headroom would be as the name says head room. 500mm is not very much. All things in a boat are cramped compared to a house but having your head just a couple of hundred mm from the ceiling would be quite uncomfortable I am guessing. So I am very glad that I decided on that change. I now have 700mm headroom, still not great but acceptable.

The bed base is plywood (12mm) and I will make it in 3 sections. The outboard side is 250mm and the inboard side is 500mm leaving an opening in the middle of 730mm wide. Because the hull narrows as you go back, I will shape the inboard panel so that the middle gap is parallel. The side panels have a tab of ply glassed onto the underside as a lip for the middle panel to sit in. I will also need to run a removable brace across the middle to support the lid as across that big a span the ply will sag or bend under load, but above the base will be a mattress that will spread that load to a degree. So once I had cut the parts from a ply sheet, the first task was to glue and glass the tab strips on. I settled on an 80mm strip 40mm onto the panel and 40mm overhang as the support for the lid. I coved and glassed them both sides and let them set a day or so before gluing and glassing them into the boat. The outboard side was easy enough as the curve of the hull is only 10mm or so over the span between the bulkheads. So it was just a matter of getting it at the correct height and level all over.

Once I had it level I pulled it out a touch, buttered it with glue and pushed it back in tight and places a screw in the front edge to hold it in tight. I pushed glue down the ends with a spatula and then coved the top and glassed it with pre wet glass (I prefer to wet glass out on a plastic sheet, roll it up and then roll it out wet on the job) and applied peel ply. I had some glue left over and rather than waste it I coved a little of the join underneath. I had braces screwed underneath so I could not cove and glass underneath anyway but I placed the coving between the braces knowing that I would have to sand it before glassing.

Then during the week I started the more difficult process of fitting the inboard panel. More difficult because I needed to shape it to the amount the hull tapers so as to keep the middle opening parallel. Once I had that cut as close as I could get it so the gap between the edge and the hull was as small as possible I glued and glassed it in the same way I did the other side. I had pre angled the edge to the chamfer panel by angling the saw blade on the power saw. 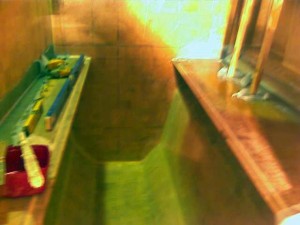 Isn’t modern technology a wonderful thing. I am typing this while sitting in the back of our car on the way to the snow, connected to the internet via mobile broadband. So no work on the boat this weekend as we have a few days off snowboarding.