Re Thinking The Water Tanks

I started early as I usually do on Sundays so I could knock off early. Some kind of water-ski races are being held in Gosford this weekend (national titles?) and Jo wants to watch them a while. And after about an hour of trimming the water tank sides to size I made a silly mistake ruining 2 of the sides. Instead of trimming a few mm off one side to square up the panels I set the saw guide in the wrong place and trimmed 100mm off and before I knew it I had cut them and immediately noticed they looked a little small!!! I was extremely annoyed with myself. I don’t want smaller tanks so it meant I would have to go and make new ones. I decided to take a break for a while and I went shopping for some tank parts. I went to my local national boat part chain (I wont mention them by name because I am about to say something not flattering about them). I don’t usually shop at them because I know they inflate the pricing but I have a gift voucher and I figured that potable water tank parts are fairly specialized. Anyway long story short, I bought drinking water hose, various through tank fittings and one of them is an inline tap to cut the water off if needed (working on things down the line). It was $6.90. Not expensive you would think. I then went to Bunning’s for some other items and saw exactly the same item in the garden department (EXACTLY) for $3.90. Same brand, same packaging, item number, everything the same) This bring 2 problems to mind. First am I getting potable water quality. Probably. But the same item near double the price because it is sold in a boating outlet. It is plain wrong and annoys the hell out of me. $3 is not the point it is the % increase, if we are paying double on something simple then we are likely paying double for everything. So my day wasn’t getting any better.

I went to visit my cat owning friend Warren for some advice on how to build the tanks and he gave me an idea that made the mistake I made earlier fortuitous. I was going to make separate tanks, separate that is to the structure of the boat then fix them in. He asked why I was doing that. I didn’t really have a reason. I thought it may be a good idea to have a layer of air around the tank so if it sweats (condensation on the outside of the tank) it could evaporate off and not sweat on the living space side of any wall. He suggested this would be unlikely through 2 layers of glass and 20mm of balsa and that building the tank out of expensive core material when I already had tank sides built into the boat was a bit of a waste. I thought about it a bit more and agreed. So my day was not turning out to bad after all. 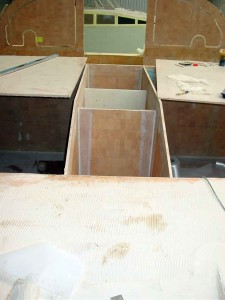 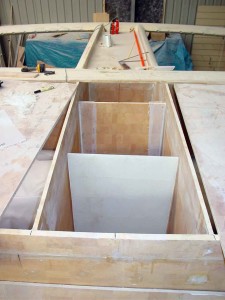 So now the other side of the bedroom walls are now tank sides. All I have to do is fit the other 2 tank sides and lids, coat them with about 6 coats of epoxy then however many coats of tank lining paint (still working on that one and will report once I get the information I need) and build lids. I still have not decided where I will exit the tanks with skin fittings through the tank walls, probably through the side wall into the bedroom (under the bed slats). The lids will have filler spouts and breathers. The tanks will be 100mm short of the top of the space under the dashboard and I will have a hatch in the top of the dashboard to enable me to get to the tanks if need be. This will be hinged and be able to open inside the saloon. At the front end of this tank space is my main anchor well, (the usual anchor well on the foredeck space will be my emergency anchor well) and by leaving this small area open inside the anchor well I will be creating a rainy day aircon vent. How it will work is if it is raining I can open the anchor well lid a little, it wont matter if rain gets in, it is a wet area anyway. Fresh air will enter the well and run along the space along the top of the tanks and out the lid through the dashboard open in the saloon. At anchor the boat will always be pointing into the wind so air will rush through this space. I may also run similar vents into the bedrooms to keep airflow in the rain when the normal hatches will be shut.

I have used duflex to make the front tank wall/rear of anchor well as it will have anchor chain bashing against it so figured I would need a little more robustness, I am sure that the nidacore is probably strong enough also but just to be sure I used duflex. I will use the 600mm nidacore sides (one of them anyway) to split the tank area into the 2 tanks. I will use the now 400mm nidacore panels to make baffles for the tank to minimise free surface area, even though this should not be a problem with this shape deep but not wide or long tank but just to be sure I will baffle it). The exercise in making the panels was not wasted as I will use them but more importantly I will make furniture out of the material soon, some of which will be pre glassed flat like these panels, other areas will be formed on the boat (curved panels) so practice making the flat panel is good. They ended up having 800 grams of resin for each 450g of glass each side, so 1 meter square panel would end up weighing about 3kgs. I figure on about 20 panels each being 2 square meters so that would be about 120kgs give or take.

So whilst I got another 16 hours (9 yesterday, 7 today) done I don’t have as much to show for it as I would like. I am hoping that by next weekend I will be working on the inside of the roof. I want the roof done soon so that I can get it on the boat as soon as possible.

I crossed another milestone this weekend. I passed 2000 hours on the build. I thought I would have the shell finished by 2000 hours. I think that will be more like 2200. Most people tell me I have at least 1000 hours of internal work and another 1000 hours of fairing. It is looking increasingly likely that I will need some help (professional hired help) to get the boat finished in the next 18 months. I will work the next year on the inside and see how I am going. If I am still a long way off finished in a year I will start to investigate help. Too far off to worry about that now.