It is amazing how fast time slips by whilst building this boat. Already I have been working over 4 years and it is now 2 years since I put the second Pureseal test plate in the water. And It is still performing as well as I would expect it to. I had a visitor who had followed my progress over the years about the middle of November and I showed him the panel and it was there as usual covered with algae about the amount 2 and a half months would usually produce. Then a week later we had another big southerly storm and I thought nothing of it at the time. Then today when I went to check on the panel the crossbeam on the jetty it is tied to was gone. Blown away but the water surge of the storm. There was some rope and fishing line wrapped around the pylon so I pulled it up and tangled in amongst it was what was left of the beam and my test panel. It was black, which it had never been before, no doubt because it was lying on the bottom and for the first time there were tiny shellfish attached to one side. Not only were they tiny but very easily pushed off with my finger. 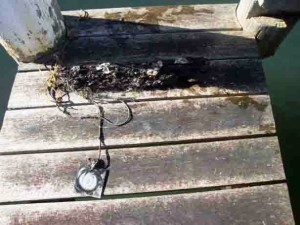 Being on the bottom changed the growth from green to black, I dont expect to see that normally and probably would not if the beam had not broken. I used my finger to remove most of the algae and then finished the job with a cloth. It cleaned up as well as it usually does, it seems to be getting more and more pock marked and scared as time goes on, which I thing is to be expected, it does not seem to have any detrimental effect on performance other making the panel just a little harder to clean, but I am still satisfied that it is working well enough that if it were on my boat I would not be thinking it needed to be reapplied or removed yet.