Last month I prematurely raised the Pure Seal sample a month early. I hinted that the test plate looked pretty good. It does in fact look great. I think this formula is working. To temper my enthusiasm I have to add that it is still only 6 months in the water (from 1st December 06). 3 of those months were the warm water months so I am very encouraged by the results so far. The last test panel was a total failure after the same time in the water. To remind you, any growth on the panel simply rubs off with just one finger, not even your fingernail just the tip is enough. I am also told that because the sample plate is static in the water the growth is either going to be less on a moving boat or in fact self cleaning with the motion of water over the hulls at speed.

So with the panel still working the test continues. I will keep the test going for the rest of the time it takes me to build so at least another 2 years. If it continues to perform the way it has it will certainly be on my boat. I spoke with the Australian distributor at the boat show. They lost a lot of money paying for boat owners to remove the first batch from their boats and are understandably cautious about endorsing the stuff and it is currently off the market. However they are also running tests and their results mirror mine and if it continues to perform it should be back on the market by the time I need to buy it for my boat.

Back on the build, I got back from Sanctuary Cove on Tuesday night. On Wednesday evening I started sanding the deck again. Over the last 3 evenings I have managed to sand 3 of the 4 stiffeners. I worked out that it takes as long to sand each one as it took for all of the other work combined. In other words, to cut the stiffeners, glue them down, cove them, glass them and bog them took about the time it takes to properly sand them. And of course, sanding is such a fun pastime you hardly notice! Actually sanding never seems as bad as it is before or after, hence the underestimation of how fast you think you can do something before you start. Your mind refuses to allow you to believe that it will take you as long as it will so as not to discourage you from starting so you tell yourself it wont take long to finish, then once finished, even thought it took twice as long as you thought, it doesn’t seem as bad as you made it out to be during the work. But during the sanding, it is so monotonous and such a horrible job that you exaggerate how annoying the job really is so that when its done you think to yourself, well that wasn’t so bad. I guess this doesn’t really convey the true nature of sanding, its not as bad as it seems but worse than it seems depending on when you are thinking about it. I cant imagine how much harder they would have been had I used round pipe! Maybe it would have been easier to hide the blemishes. Anyway I am almost done. I will experiment with painting over the weekend. 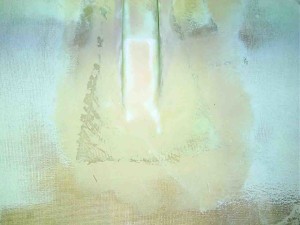 I am in 2 minds about whether I will paint the underside of the deck after all. The reason is that I may need to screw through the deck to hold it up in place until the glue sets and with the bottom painted the patch up is much harder with the paint on. If I can get it up and braced without screwing through it I will be ok. I want to practice painting on the underwing as it is hidden if I don’t do a good job and I want to experiment with some non slip ideas that I would use on the deck if they work but can hide under the wing if they don’t.

Either way I wont get the panel glued up this weekend but should get it up next weekend. I still have to turn the panel over which requires a few helpers, and then cut the kerfs for the curve at the front, then I can figure out how to raise it, butter the bulkhead underneath with glue and raise it up and brace it in place until the glue sets and I can get some tapes on.

Then of course all of the internal taping starts. I am hoping to have a little celebration barbeque on the deck once it can take some weight.

While I was away James got the panels glued on to Nine Lives and filled and sanded it ready for glassing. The glass has arrived but he is still waiting on his resin to arrive. 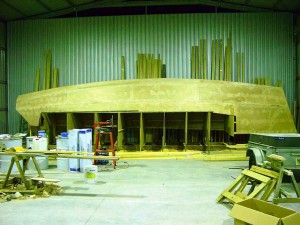 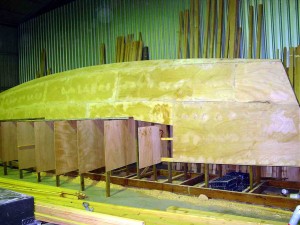