Pure Seal may be back on!

Regular readers will know that I have been testing some sample plates of a new type of single application antifoul called PureSeal. The idea being that this material is slippery which helps the hull move through the water giving better speed and fuel economy. But its antifoul property is that, being so slippery nothing can grip to it and that under normal conditions the movement of the hull while sailing would shake off most growth and a light scrub would remove everything else. 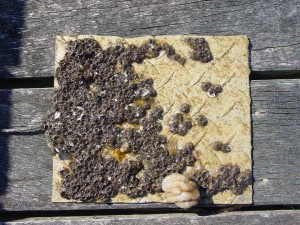 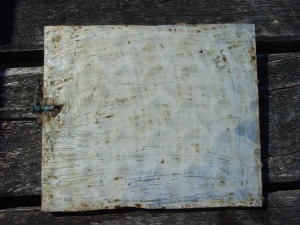 The first test panel was a failure as after 9 months in the water the panel was covered in sharp, well adhered growth. I have scraped one side with a scraper and restarted the test but only for interests sake (See pictures above). The makers claimer there was a problem with the first batch and issued new test panels. This second test panel seems to be working, but the first test panel also seemed to be working after 3 and 6 months. But this panel has lasted the summer months, which is promising.

The pictures above show the new test panel which has been in the water 3 months, on the left is the control side that I will not clean for the duration of the test, the picture in the middle shows the test side and the picture on the right is the test side after rubbing it with just my finger and rinsing it by dunking in the water. As you can see it is as clean as a whistle and came off very easily. As I said when the first panel cleaned off this easily, if it maintains this I have no problem with giving my hull a light scrub every 3 months to end up with a brand new boat again. I would consider that very light maintenance compared to having to slip the boat and re apply anti foul every 12 months.

The test continues but on the basis of this second sample lasting through summer with little or no permanent growth I am willing to say that Pure Seal is back in the race. For now. Lets hope I am not disappointed in 6 months like I was with the last test. And if this one fails there will be no benefit of the doubt given and no third test panel. I want this stuff to work but I cant afford to put it on the boat unless I am absolutely confident the stuff works and lasts the distance.

Unfortunately there has been a last minute hiccup with the lease and I wont get the keys until Tuesday so I will post pictures of the new shed then. In the meantime I have coved and taped all of the internal joins on the dingy. I will glue the compartment ply floor in tomorrow and glue the tops on. Then I can start the outside taping and then it will be just a matter of cleaning the hull up to finish it.