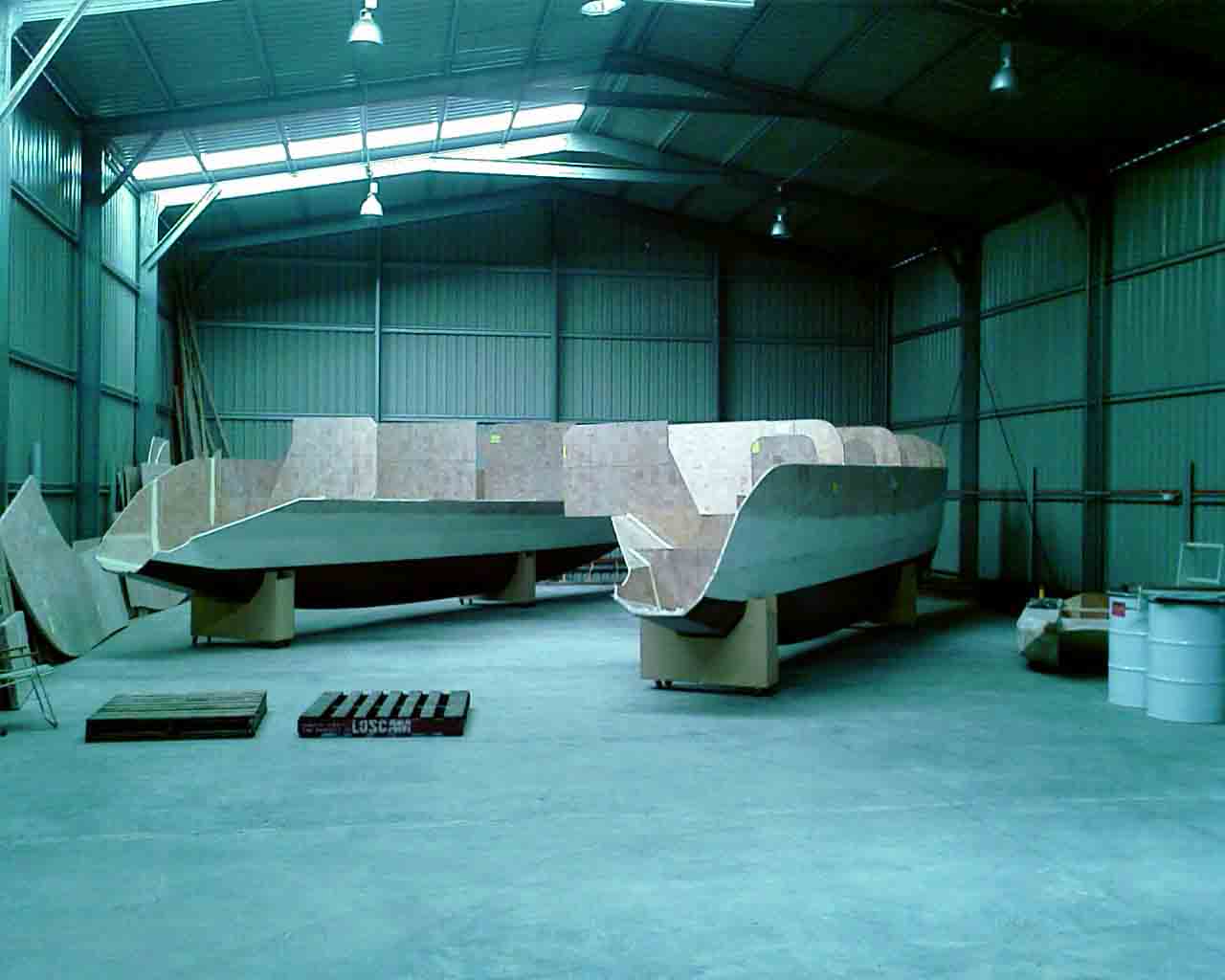 Most boat builders would probably fair a boat before cutting portlights into a curved hull as the holes tend to create a grab point for the long board. Unless the port fitting is likely to cause so much damage to the faired surface that it needs to be re-done anyway. For 2 reasons I have decided to cut the portlights in before fairing. Firstly I thought the de-core and back fill with uni would result in a bit of a mess. I expected to have resin running down the hulls sides when I stuffed the uni into the edges but, much to my surprise, I hardly had a run at all. But with stray uni threads here and there, the back fill did look untidy until it was cleaned up when set. The other reason is that I need to keep getting work done so that there is as little to do as possible when the time finally comes to finish. I want the fairing and painting to be just about the last thing before launch leaving only the final refit to finish and launch). Besides, the cutting in of ports and hatches is high visual impact stuff, you need HVI to keep motivated sometimes. 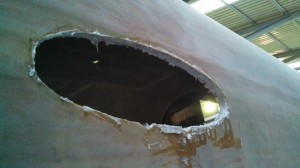 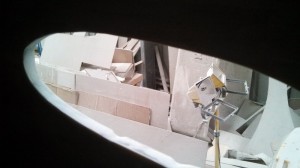 But I am getting ahead of the timeline. First thing to determine is how many and where are the ports going to be put. The number of ports on our boat is more than usual. We have 5 down each side. Most have 3 or 4. Part of the reason we have so many is down to my obsession with symmetry, for example, the most forward port is necessary in the starboard hull as it is the ensuite and not necessary in the port hull in the walk in wardrobe, but I wanted each side of the boat to match. Having said that, the stairwell walls are not in exactly the same place in each hull due to the different shapes of the rooms on each side, and because the ports look much better centred in that small space one is about 20mm further aft than the other, but I dont even remember which one so I doubt anyone would ever know. Lets face it, have you ever seen both sides of a boat at the same time?

So we have a port in the most forward room (wardrobe/ensuite) then the next room is the main bedrooms on each side. Then the stairwells on each side. Then on the port side is the bathroom and starboard is the bedroom dressing area, then the final ports on each side could probably have been left out but I had them and it makes sense. On the port side is the shower on the starboard side is the actual bed area so again it made sense. I tried to have them evenly spaced but because of the distance from the middle of the stair well on each side to the middle of the bedrooms, the spacing is even for the back 3 of about 1200mm apart then a bigger gap to the middle of the bedrooms of about 2000mm then about 1500mm to the most forward portlights on each side with the gaps on either side being about 20mm different to the other for some of the ports in order to centre them to their respective spaces. This of course only makes a difference from the inside, from outside this change is invisible, and had I not made the slight changes would have been noticeable in that it would have looked odd from the inside of the various rooms where the spacing was changed to suit. Now it all just works and looks appropriate. 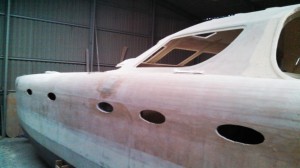 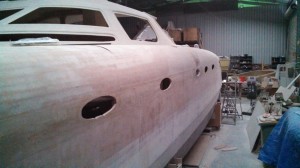 I also debated for a while (with myself) the height of the ports. I asked other builders and the most common height was 1000mm above the water line. I have mine set a little lower than most, not by much, about 100mm. In the end I decided on having the centreline (horizontal) of each port on the line of the join where the duflex hull sides meets the start of the strip planked deck curve. A number of reasons, firstly it is a pre marked level line. Second it is a flat area, any higher and the curve starts to kick in meaning I would probably need to lay a ply pad down first. Not that that would have been an issue or even difficult, it was just more work that I frankly could do without. Eventually that ply pad would be hidden by the lining. And maybe I will regret that the portlights will end up recessed in the lining rather than more flush with it that the ply pad would have contributed to. But as you can see from the pics below, without the ply pads, the ports protrude from the outside skin leaving a lip to seal to. With ply pads the flange would not protrude but be below the level of the skin and probably harder to seal. And also because Jo would be better able to see out at the height they are set at. I asked her to stand in front of me and point to the height on me she wanted them and my adams apple is her eye height and that is the height she chose and it is exactly the height I was going to put them at. Winner all around. 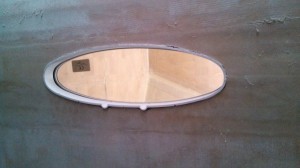 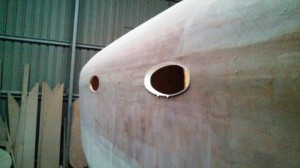 So once marked out and cut out (I made a cardboard template with centre line marked on it so it would be easy to ensure levelness) I made the de-core trough of each much deeper than I would normally would and firstly backfilled with filler. The plans call for 5mm de-core throughout the boat, I usually de-core to 10mm but this time I went to 15mm deep so that I could lay a deeper bed of glue under the uni rope and still have room for filler over the uni rope. I always put some glue on the balsa core first but usually its just a smear of glue to create a bed for the uni without any voids that the uneven de-core (the balsa comes out unevenly in places), but this time with the extra depth I filled about 5mm of filler, then the uni, which was about another 7 mm then I still had a couple of mm of filler over the top to finish and this can be sanded smooth and to exact size and shape when finishing.

I did this for 2 reasons. Firstly, the design of the ports has drain troughs in the mould. That means that the cut out in the boat must have corresponding notches in the outside edge fill to accommodate them. If I did not make the de-core deeper I would need to grind those grooves into the uni rope, much harder to do cleanly and more importantly, what is the point of a uni frame if you are going to cut half of its strength away by grinding notches into it. The other reason was so that the screws or bolts (I think I will go with stainless self tapping screws from inside the boat so that with sealant only the actual opening can be a point of leakage) would go through or into the uni rather than filler and be a stronger hold. These ports fit into the hull from the inside, open inwards as all portlights do, with that flange that protrudes through the opening and on past the outside skin (in the opposite way that a hatch fits and protrudes past the inside skin) and in my case past the outside skin by about 4mm (this varies on boat to boat as a consequence of skin thickness and curve of hull side). Of course these, like all hatches and ports are sealed into the boat with sealant so the opening needs to be snug but oversize to account for different expansion rates and the sealant can do its job stretching and contracting as the boat and port swell and contract at different rates (without the expansion gap and elasticity the sealant cracks and leaks). I originally cut the ports in with a fairly tight fit and opened them out once the filler had set. I have made the gap about 2mm all around as best I could but here and there it blows out to 3mm. I will build a bead of sealant from the hull skin against the port edge and neatly cove it so that water runs around and over it. Then the stainless steel trim will fit over hiding it all. It is purely cosmetic and just attaches via 4 grub screws. The stainless trims do not stop water running under them to the hatch seal so I am glad of the few millimetres that protrude as this will help by providing an extra surface to seal to and to cove sealant to. 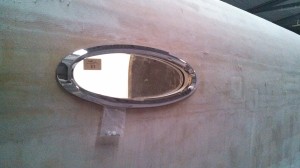 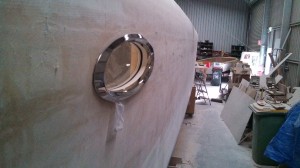 Considering their smallish size, the portlights make a huge difference to the amount of light inside the boat. We chose galley up because to us, the hulls feel claustrophobic, narrow, dark places but once light and air is added this feeling is very diminished. Still glad we have galley up, but the hulls are not quite so dark now. 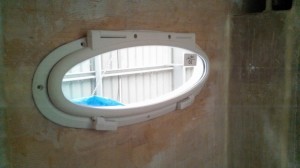 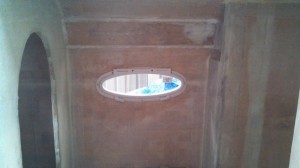 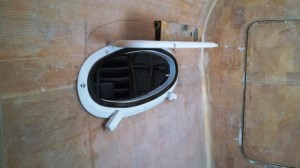 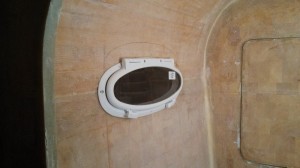 The portlights have their own drains so that water does not congregate in them on the outside and enter the boat when the port is opened.  Another very satisfying job ticked off the list of  jobs.