The plans call for 4 layers of glass under the masts, and the masts are stepped, or at least their tube or post (in the end the designer opted for a male post for a female mast to rotate on) are stepped on the cabin sole. So the first task is to glue the soles down. A fairly simple matter, I have made glue dams by attaching pine stringers. I have not bothered to seal them with epoxy, they are not structural and if I get moisture on them I have bigger problems than rotting pine stringers, because it means I have a hole in the hull! Their sole purpose is to stop the glue I push down the gaps between the hull sides and the soles from continuing on down the hull side. It forms a dam so that once the gap is full the glue stays in place and overflows at the top, telling me the gap is full. Without them I could keep pushing glue down until the entire under sole buoyancy cavity was filled. 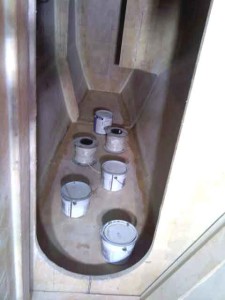 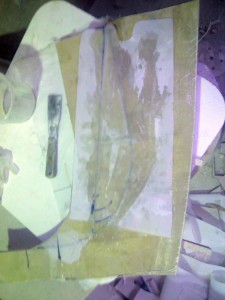 I pushed some screws through the top into the web but wad too scared to put any into the stringers, I just don’t want to risk putting a screw through the hull. So just to be sure that the sole is bedded down into the glue I placed some weight on the sole while it set overnight.

The piece of bulkhead that was cut away in order to clear the way for the continuous mast pad had a missing section as a result of the way I moved the door across. The door is reshaped as a result of the move across out of the way of the masts and this left a small section in the bulkhead that needed to be filled in. This small section is now in the piece that I cut away, so I took the opportunity to glue it in on a flat surface instead of trying to fit it in place. Much easier. Once set the cutaway section of bulkhead will be glued and glassed back in and the glass will cover all of the joins and return the structural strength to the bulkhead.