Port Side Deck Glassed On

There are a couple of very good reasons why cats sell for upwards of half a million dollars. One is the materials of course, and another is that there are a lot of man hours in any boat, whether owner built or production built. The other glaring reason is there are jobs that need to be done that are simply horrible. Lets not sugar coat it, sanding above your head with a grinder that throws more dust than water in a shower, is about as bad as boatbuilding gets, with the possible exception of torture boarding, but at least with a torture board you are only getting the pain but not the dust shower. As I have noticed before, it is amazing how heavy a 1 kilo grinder feels after only a few minutes overhead.

Having said all of that, it is also amazing how satisfying it is plonking on the couch after a shower and having put that job behind me. Sore and tired but extremely satisfied at having completed a decent days work. To recap what this messy job involved, the 2 panels were glued together by squeezing glue from above and below and letting it set. Therein lies the work. Letting it set. It really isn’t possible to glass on wet glue in this instance because blocks are needed to pull the 2 panels into fairness, which would be too difficult to do through wet glass, not only in terms of pulling the glass off the substrate but in the time needed to pull it all fair before the glass goes off. It might be possible but in the end I chose the let it set method. The conclusion to this is that you must grind the excess glue off upside down.

Once the grinding was done, a wipe down to remove dust and a measure up of the distances between each bulkhead (you would think I would know them off by heart by now) and cut the glass tapes needed to do the work. As with all major join taping, it is 2 layers, 150mm and 100mm of 450g double bias and there are 2 joins, the hull to side deck and the overhead side deck to deck join. Because these are a series of short tapes they can be wet out as I go. The first thing I did was brush some resin onto the joins so that it could tack off and make the adhesion of the upside down tapes better from the start, if you dont do this you could find gravity making life difficult getting the tapes started. Once up and all air removed from behind the tapes they wont fall down but getting the first meter or so to stay up is difficult if you don’t pre wet the substrate. So I started at the most forward sections because they are a bit shorter. I wet the first 2 sections out, one of which is inside the locker which required me to climb up into it. I had a halogen light sending light down the hull and could see what I was doing unless I looked directly down into the light which temporarily blinds you. I underestimated by a tad just how warm it gets inside the hull with the halogen light on because despite working pretty fast the tapes were getting quite warm by the time I rolled the last couple out. I got them down in time but it was a timely warning not to wet too many tapes out at a time as I simply cant get them all on before they go off while the weather is still warm. Whilst it was not the 38 degrees it was a couple of weeks ago it was 30 degrees. 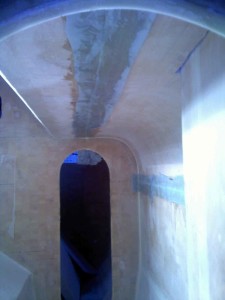 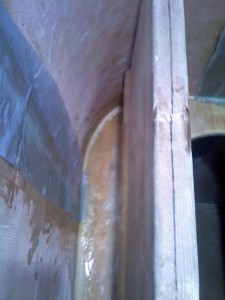 I was a bit worried about a couple of things, the longer tapes (the main cabin is 2.9 meters between bulkheads and also I have to reach behind the daggercase and cove and tape the bulkhead. In the end neither was a concern. I could reach behind the case and with some resin over the coving it both smoothed out the roughness that I achieved reaching in and provided a sticky surface for the tape to stay stuck, but word of warning, don’t let the resin tack off too much or you will have the opposite problem, you wont be able to move the tape once it touches meaning you will have to get it right first time, which is not always the case. I managed to get the first tape pretty close, I like to have them centred on the join but I was a bit off centre on the first tape, it still very adequately covered the join though. The second tape was centred on the join and just overlapped on side of the not centred tape below it.

Then to finish for the day I cut a piece of polycore to exact length needed to curve around to the stair well on the starboard side mirroring the curve set by the kickboard. Using clamps, cellophane covered timber blocks and some slabs of timber to push against it to hold in exactly where I want it to set, I attached the now glassed polycore in its curved position and let it set overnight. Tomorrow I will glass the inside inside of the panel and the day after that decore the bottom of it and the day after that finally glass it into the boat. Its only half an hours work each day but each layer of work must set before the next can be done.