Port Side Deck External Tapes On

Another satisfying but exhausting days work today on another beautiful day, 30 degrees again and I am missing them. Oh well by the time the boat is done we ought to be getting 33 degree days in April. I got a little more done today than I had originally set out to do. I had set out to get the long tapes onto the port hull and to glass the inside of the curved fascia the the starboard steps so that its shape is set. I wont yet glass it in place, I need to take it off one more time to decore and backfill the bottom of it before it can finally be glassed on. I cant decore it until there is glass on both sides, and each task requires a day to set. So fill it tomorrow and glass it onto the lounge suite on Tuesday. Then I can make the top panels which include removable tops so that access can be made to the underneath storage areas. Some of this space will house the battery chamber. I have not yet shaped the port side return chaise. I have plans for the under section of this part of the lounge and cannot yet make it, more on that later.

Being warm I was a bit concerned I would not get the long tapes onto the port hull in time before the resin went off again today, but instead of that resin stress, I created a different reason for the same problem. I started with the shorter side to deck tapes (shorter because the decks over the aft cabins is not yet made so there was nothing to glass the side deck to yet). I mixed way too much resin for 1 tape, in fact I mixed enough for both tapes so I really had to work fast getting the first 150mm tape on so that I could load the 100mm tape through the wombat and onto the spool before the resin went off. I just made it, the last half (about 5 meters) of the second tape felt quite warm as I pressed it down onto the wider tape that went down first. I felt that the tapes were a little dry, meaning I ran it through the wombat a little fast I think, so I brushed some resin down as I went laying down each tape. This resin was part of the same batch and was getting very warm as I laid the last couple of meters of the second tape down. I ran the consolidation roller over the peel ply as I applied it and this ensured there were no bubbles or raised tapes. So whilst I worked faster than I was intending and felt rushed by the resin, in the end it all worked out well. 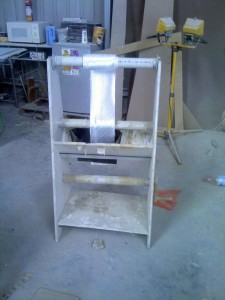 The wombat looks a bit worse for wear but its only dust and hardened resin drips, it still works fine, and after today I only have 4 more tapes to run through it, for the starboard side deck tapes. With the side deck to deck tapes on I had a better idea how much resin to mix (I could very easily work out roughly how much I would have needed by some math’s working out how much the cloth would weight and mixing the same amount of resin, I didn’t and got it wrong but no harm done). I just did the math and if I had earlier I would have mixed exactly the right amount of resin. I mixed a kilo of resin thinking it would be enough for just one tape, but the tape was 9 meters long and 150mm wide and 457 gram per sq meter cloth so doing the math this comes to 616 grams and the 100mm tape comes to 411 grams so obviously a kilo was enough for both tapes. Oh well lesson learned. So knowing how much resin to mix, the second set of tapes was less rushed and less stressful. I mixed enough resin to one tape at a time and worked at a more reasonable pace and got both layers onto the hull side and peel ply applied and rolled.

Before I applied the hull side to side deck tapes I prepared the port hull side deck to be placed onto the boat. It needed the inside glass to be keyed where the bulkheads would be so that the glue and glass could grip it and it needed the over ensuite bog faired. I had partially finished that so it only required about a quarter of an hour sanding to finish, it was still not as finished as I would like but getting the side onto the boat is a 3 man job. Last time I had Jake and a visitor to the shed, today I had 2 able bodied visitors and no idea when I would next have 2 people around to help so it was going to be best for me to get it on today.

So with the inside of the side deck prepared we lifted it up. I had marked out the daggercase hole and cut it out months ago but unlike the port side, this side deck has never been dry fitted back onto the boat, so I was not sure it would all fit back properly. We lifted it up and slid the deck over the dagger case and it stuck about 30mm short of where it needed to be. So with a jigsaw I trimmed the daggercase opening about 10mm which allowed the side deck to fall the last 30mm beautifully into place, a better fit in fact than the port hull so it is going to be a bit easier to glue down.

So 2 very satisfying days work, 7 hours each day. I am a bit sore and tired but feeling like I have achieved more than the sum of the hours worked for some reason. I guess with the port side deck glassed on (everywhere I can currently reach, there is still come inside taping to do once I cut my way back into the forward sections) and with the starboard side deck on the boat awaiting the same work I have done to the port side this past week, the boat is finally closed up. I can have Dean get started on fairing the hulls (leaving the cabin until after Fergo has fitted the windows).

For the next few weeknights I will work again on the furniture, I would like to get the saloon looking like its finished as soon as I can.