Port mast base pad glassed in.

Glassing the first layer of glass was fairly easy. It was layers 2, 3 and 4 that proved more difficult. Firstly I cut the pieces of glass to size, each one a 100mm shorter each way (length and width) than the one above. I then put a plastic sheet down on the bench to wet them out on. My preference is to wet out the cloth on a flat plastic sheet then roll it up, take it to the job and unroll it and lay it down. I find I can control the amount of resin better and it is a much faster way to get the cloth wet out. I got the first layer on but decided against trying to get the next layers on until the first one had either tacked off or set completely. It is such a large section of glass and completely covers the floor of the hull that it is impossible to get to the next layer without standing on the one below and being wet, it was not possible to do that without disturbing the wet glass resulting in air bubbles.

The next morning (this morning) I expected the glass to still be green but winter seems to be over here and today we are expecting 28 degrees. In August!. Usually it is late October before the mercury nudges 30. Anyway the resin was very set. So I had to key the surface. Angle grinding is the most effective but messiest (dust) way. So for the first hour or so I ground the top off the resined glass and then vacuumed the dust up and wiped down the glass in order to apply the second layer. 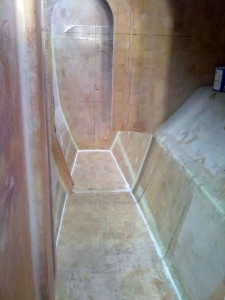 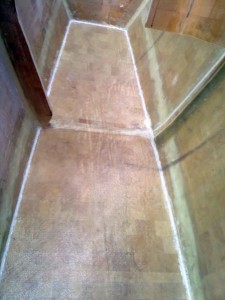 So with these 2 layers down I had a break for lunch. It was getting hot and sweat had been dripping from my forehead so I was pretty tired. The heat combined with the late nights watching the ashes and I was starting to feel it. Anyway after about an hour I got back into to it to lay the last layer of glass. This time I had to gingerly walk out over the wet glass using a couple of mdf planks covered in sticky tape.

I got the first half of it on by kneeling on the 2 planks, then I had to move the planks back and I found that as I lift them they lifted the glass away in places. I stopped them doing this by using my trowel to free up the suction effect of the wet resin on the clear tape and rolled the lifted sections back down, which was easy enough, then I unrolled the rest of the last cloth layer and applied it. I then rolled out the last of the air bubbles and breathed some relief.

Double Bias glass is amazing stuff. Because of the weave it is able to stretch and shape very easily and will absorb a lot of distortion and still remain properly adhered to the substrate. Bubbles you think will never level out do so with the finishing (consolidating) roller with ease.

It was now about 3.30pm and I was exhausted but I wanted to push on, but the other guys in the shed started spraying the hulls of the Nine Lives with yet another layer of undercoat. So I spent half an hour or so working out the rear bathroom layout wearing my breathing mask but at 4pm I decided that was enough. I watched the guys spraying Nine Lives for a while then took off home, satisfied with my days work. 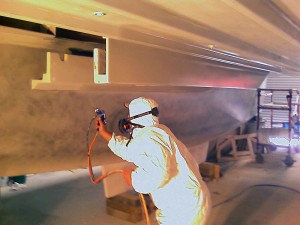 Tomorrow I will set about rebuilding the bulkhead. Once done, all of this work is fairly invisible. It will be as if I had never cut the bulkhead away and the layers of glass for the mast are just flat layers of glass against the hull and sole. If I had not written about laying them I doubt many would even pick they were there. There is going to be a lot of this invisible structural work, not much to show for it, very time consuming, but work that must be done so that the boat and boat systems, the wiring and plumbing and all other essential stuff works as designed or planned so that the end result is a fully functioning home that sails. I will keep posting but sometimes there just isn’t much to show for the hours of work done.