I got in to the shed today and the paint had not fully cured. I toyed with the idea of giving it a second coat, but decided against it. I also decided against painting the underside of the top before gluing it on, it would have been slightly easier but in the end I decided that with the hull to deck panel off there was still plenty of room to get in and paint the top after I glue and glass it on. I will paint the rest of the area while the tapes are still green tomorrow and give the base a second coat.

Gluing the inside bow panel on was easy enough. I lifted the panel off about 300mm and buttered the tops of the bulkheads with glue. I had marks on the panel to easily relocate it in the correct position without sliding it which disturbs the glue. Once back in position on the bulkheads I pulled it down tight to the bulkheads with some ratchet straps and then put some screws into the top and bottom of the panels into each bulkhead to hold it down tight. You cant drill through the middle of the panel as that would ruin the integrity of the glass over the panel but top and bottom will be taped to the next panel so it wont matter. With the gloves back on and using my finger I made a glue cove with the excess glue that had squeezed out inside against the bulkheads.

Then I screwed some tabs into the long panel to panel join to flush each panel to the other and filled the gap with a mixture of fill and glue. I then filled the spaces under the beam and just above it where the beam exits the panel with offcuts from the panel itself (from when the beam hole was cut into the panel) and glue. 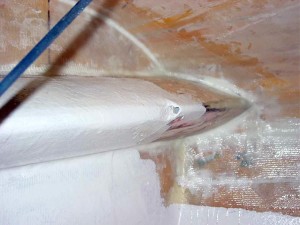 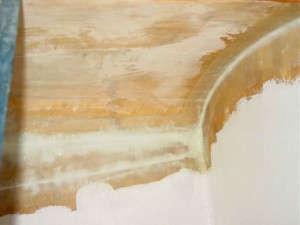 I let it all set a while and had some lunch, wanting the glue to harden a little so it would not push out of the join when I coved and glassed it from inside. It is important to cove and glass the inside of these difficult to get to joins such as around the beam wet on wet. Otherwise you will have to sand off the sharp lumps of glue before you can glass as they will create air bubbles in the glass. Wet on wet and any glue flattens out under the glass and makes for much better adhesion and less work. The coving and glassing takes a little while as you need to ensure that the joins are good with no bubble or lifting glass around the many angles and turns.

I would have liked to glass the outside wet on wet as well but because I need tabs to pull the panels flush I am not able to. This is not such a concern as sanding outside is not difficult. So tomorrow I will start with painting the rest of inside to give the glue a little more time to set, remove the tabs, sand the join and glue (just as I did on the hulls when they were glued) and tape the outside of the join. I will also need to glue conduit in this area for the tramps but not sure if I will do that now or later.