I managed to get another bulkhead up today, another temp mdf (tbh2) and number 8 overall.

As I had to get away the other day to catch a plane and may have rushed a little, I decided to re check all the measurements. I had a thought whilst I was away that I am checking square against a stringline but I am not re checking that the stringline is actually square and sure enough it had moved. Probably because I had not braced the posts that the stringline is attached to. So I re adjusted and braced it. It had only moved by about 3mm probably because it did not take much (because of the lever effect) to move it a mm at a meter above where it is attached and that is enough over 12mt to put you out of square. I was about 3mm out. 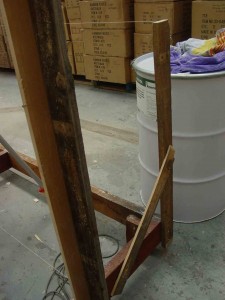 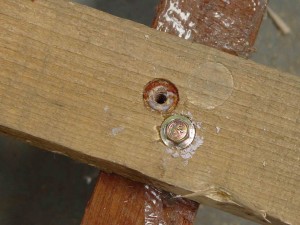 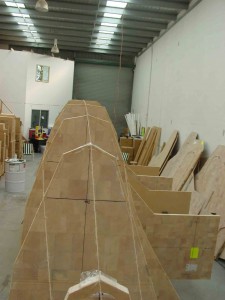 I found one bulkhead that needed to be re positioned (out by about 3mm) as a result of the stringline being out (and one temp bulkhead but it was only out by 2mm and as it is a temp I decided I could live with this). I re positioned the bulkhead that was out, but a tip here, use new holes, as the bolts try to find the path of least resistance and go back down the existing hole and even though clamped, will just go back to the original wrong position if you don’t.

So the 3 lessons for today, always brace anything that may move especially if it is important that it doesn’t, always check and re check measurements and if re positioning use new screw holes.