Twilight sailing last night was “Lady’s Skipper Night”. I was quite anxious about the race, given that I really don’t know how to sail. I took on the challenge and upon arrival at the dock insisted that the crew refer to me as “Aye Aye Captain”. Dave from the crew, questioned my authority so I had him swab the decks. Paul has seen me drive, so he knew it was best to obey my every command. (Think white line fever.) The race got off to a great start, me on the tiller with Dennis gently suggesting where I needed to steer the boat. I managed to sail us almost to the 1st Marker when Dennis subtly took the tiller. I was guided by the “Nod, Nod, Wink, Wink” of Dennis to put my hand on the tiller during any parts of the race that had nearby nautical traffic. Let’s just say for arguments sake that I co-skippered the race. The end result saw our boat Bubba come second over the line.

At the club after the race we had a very funny occurrence. It came time for presentations and they announced each place getter and made the Lady Skipper stand up. I was dreadfully embarrassed when I had to stand up as Skipper of 2nd place Bubba. Imagine my shock when the 1st place winner wasn’t present to collect their prize!!! Suddenly the announcement came that “Jo from Bubba” could come and get the winner’s prize as she is here for the presentation. (Actually given the bad week we’d had at work I didn’t have the heart to tell them we were only there for the $2 sausage sandwiches!) I got the pleasure of air kissing two old men that I’ve never laid eyes on before as they gave me a bottle of Champagne and a Cap with the wording “Twilight Winner”. I plan on wearing the cap at all future races to scare the opposition. A week is a long time in sailing and I doubt anyone will know that Jo from Bubba really came in 2nd place. Hey! My cap says I’m a winner! 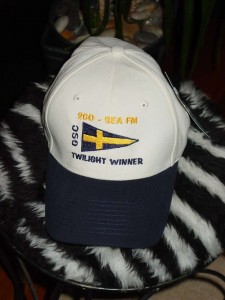