For a number of reasons not much has happened on the boat in the last 10 days or at least it appears so. The first few days until the 23rd I was in Melbourne but in the last week I have been doing a lot of smaller jobs that don’t look significant but in the end all must be done to progress. Annoying little things like sanding internal fillets smooth. Just a note on these fillets, they shouldn’t need sanding because they can be glassed while wet. I didn’t know this until after I had applied many of them so now I have to sand them smooth before I can apply the tape. Another job Jo and I did was a big clean up now that we have the dust extractor. We took the tarps off the stock and gave them a hose down (because they were covered in dust!!) and left them out to dry last Sunday afternoon and then managed to re pack the stock and saved about 4 pallet spaces, which will come in handy when we need the space when we turn the hull in around 4 weeks.

I also managed to sand some of the bog on the hull before burning out a Ryobi random orbital. What a fun job that is! After some discussion with Randal (building an 1100 in Melbourne and now just ahead of me) we came to the conclusion that the less Microlight (410) used in the bog the harder it is to sand because it has a higher resin content. But the more powder you add the thicker the mixture is and the harder it is to apply. The other downside of less powder that I can attest to is that it is far runnier and it does run a lot even though it doesn’t seem like it will at the time you apply it, but the sanding is by far the most time consuming down side of less powder so make your bog as thick as you can apply it. I am waiting on a replacement for the random orbital to arrive before sanding the rest of the hull, or at least that is the excuse I am using for putting it off. I can’t face doing all that sanding from start to finish in one go so I am doing it a little at a time. An hour here, an hour there. I am about a third done so far. I reckon it is about 15 – 20 hours work non stop but it is a tough 20 hour slog that I just cant do in one go so if it takes me a couple of weeks to get it done then so be it, I don’t want to kill myself on this! The worst part is I have to do it all over a few times because after the bog is fair you re resin, re sand, then add another form of filler called high build and sand and re apply and sand that a few more times before final painting. I am told that high build is a lot easier to sand though, what little consolation that is at this stage!. Don’t get disheartened, everyone that ever built a boat has been there before. And just think, this is only one hull, wait until it is a cat and 20 feet wide. All those topsides to fair. I don’t even want to think about it at this stage! 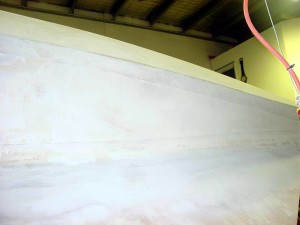 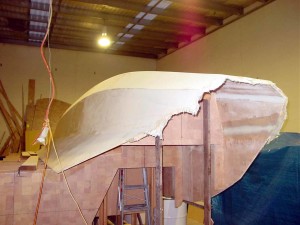 So while I have been finding any job I can do to avoid sanding, I have also taped some of the inside hull chines. So far I have only done ones that had dry sanded coving but I will be doing some with wet cove in the next few days. The method I used was to measure out the dry glass tapes to length once the cove filler was sanded smooth. Then I would paint the join with resin, wet out the tape on a flat surface and squeegee out the excess then take the wet out tape to the job and smooth it onto the join. I didn’t bother with the wombat on these shorter lengths as the set up for each tape was more trouble than just painting the resin on a table. I rolled the tape into a roll for the bulkhead to hull joins as it is a long tape and very difficult to apply if not rolled up. I attempted one without rolling it up and it is akin to trying to apply wall paper. You know, where you get the top attached and are smoothing out the bottom and it all falls down on top of you. When it is rolled you don’t have to let more out until you are happy that you have it all in place and the bubbles smoothed out provided you work fairly quickly because there is always the danger of it going exothermic. It is important to be sure the tape is cleanly smoothed onto the surface and no bubbles are present because these will be weak spots when it is cured especially in the curves of the cove. It is quite amazing how even the biggest ripples at the turns will smooth out, there is so much give in the weave. When first applying it I even thought I would need to cut large notches at the corners to allow it to all smoothly go down but it isn’t necessary (or advisable because you lose a lot if not all of the strength and load spreading ability by cutting it) because it all smoothes out anyway. In fact it is probably better to leave this smoothing until last rather than lingering on it as you go. Once the bulk of the tape is in contact with the panels below it, you can then ensure that the remaining kinks and crinkles are removed by pushing the glass around with your fingers until it is all smoothed down. 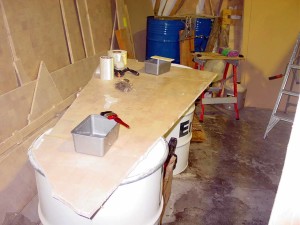 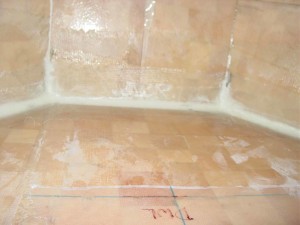 The taping of the joins is as per the plans, 1 tape of 150mm and another over the top of 100mm. The second tape is much easier to apply and is applied wet on wet. I don’t advise wetting out tapes on the job, it is far easier to apply them already wet out (on a flat surface) and trying to transfer resin from a pot to a tape above your head in a confined space either by brush or roller ends up with you transferring a lot of the resin onto yourself! If you are going to use this method be sure to wear safety glasses. I also advise using a breathing mask. Working inside the upside down hull leaves nowhere for the vapors to go. I can barely smell them and don’t know if there is any ill effect from breathing larger concentrations but better to err on the side of safety.

I have decided it will probably be neater and easier to tidy up the internals of the hull if I tape the panel chines first, up to the bulkheads, then do the fillet and tape of the bulkheads over the ends of the panel (except on the bulkhead that I filleted previous to taping…that’s already down!). I will try to tape all panel joins except the one that runs down the middle of the keel before I turn the hull. That way the hull will be at maximum strength when the temp bulkheads are removed and the hull turned. The join down the keel still needs some filling which will be much easier to do right way up, that way gravity will be on my side.

April has been a slow month which is odd considering there were so many public holidays. I virtually lost it doing work that I didn’t need to be doing if not for mistakes. But as Jo and I now say, “Bog Happens”.