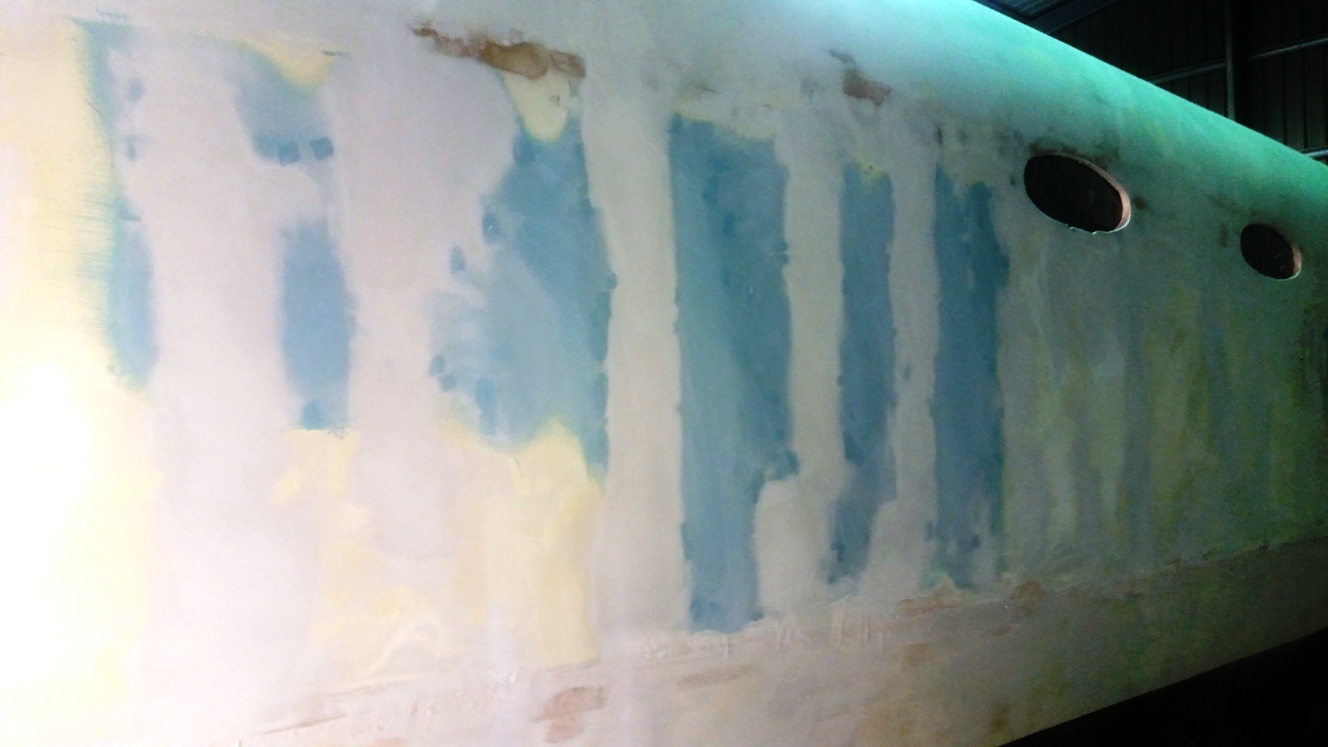 Still fairing the hull sides. Quite a lot of the somewhat expensive Microsurfacer is now dust on the floor. You may recall I rushed to get the Microsurfacer on before I went on holidays. Bit of a mistake.

We had a great time in Hawaii, one of the highlights was we swam with turtles from the back of a catamaran (makani) on a turtle reef just off Waikiki. Unfortunately there was a huge current running so it was a hard slog to stay over the reef so we didnt see as much of the turtles and reef fish as we would have liked but it was great fun all the same. Jo took this pic. Nailed it. She was seasick on the sail back (to windward!) but that’s another story (It was just some pineapple, it went down whole and came up crushed! The crew cleaned it by tipping the snorkel rinse barrel over it which cleaned it and the other passengers from the stern which we then had to ourselves for the rest of the trip back. And she was fine after so no harm no foul). For now we are saying it was more exhaustion, and the fact she is a notorious over stimulation chucker, which she did as a child on Christmas and birthdays until she was ten. 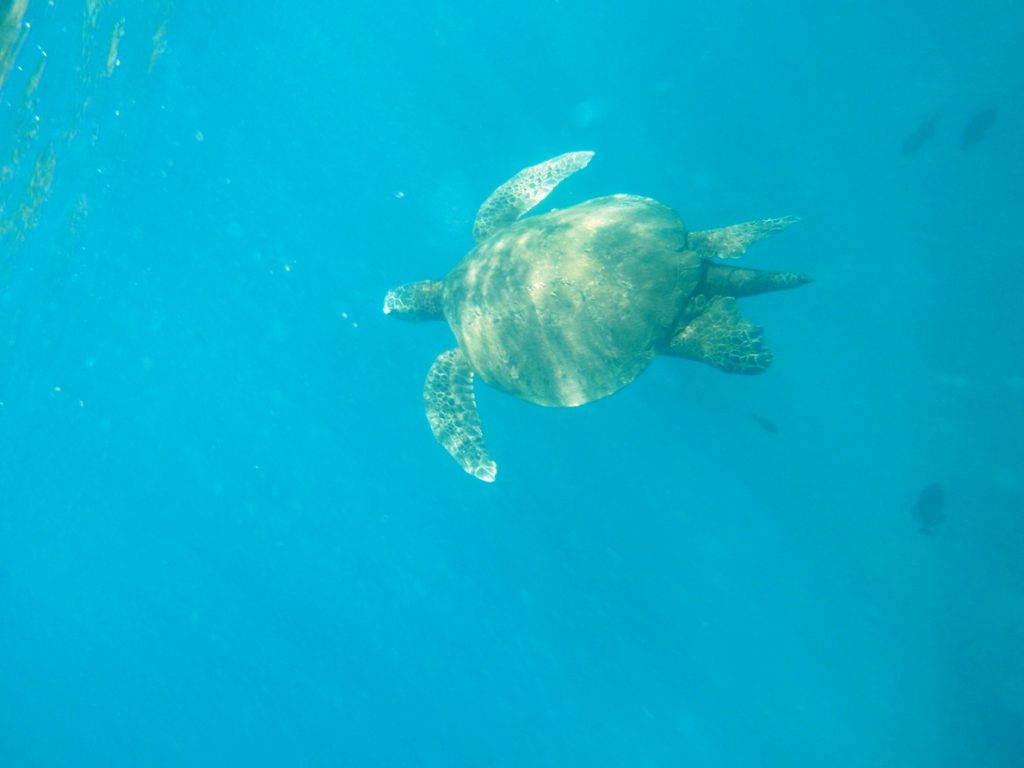 I was aware that the Jotun Highbuild hardens to rock hard after a while, I thought some weeks or even months. And my good friend Wazza warned me that this was true of ALL epoxy based products including the Microsurfacer. I knew I was away a week so thought a couple of weeks shouldnt harden it too much. I went in a couple of days later and did a little bit of sanding and it was so soft it was a dream to sand.

Upon returning to the build after the holiday it was much much harder. I guessed it would take me about 5 hours to sand when it was soft. It took me 5 times that, about 25 hours, over about 5 different days (5 hours sanding in a day is all I can manage) to sand what seemed like about half of it back off again, and the hulls are multi colored again, I have added the new grey with the microsurfacer. The predominant color is now grey so we are getting closer to fully fair. 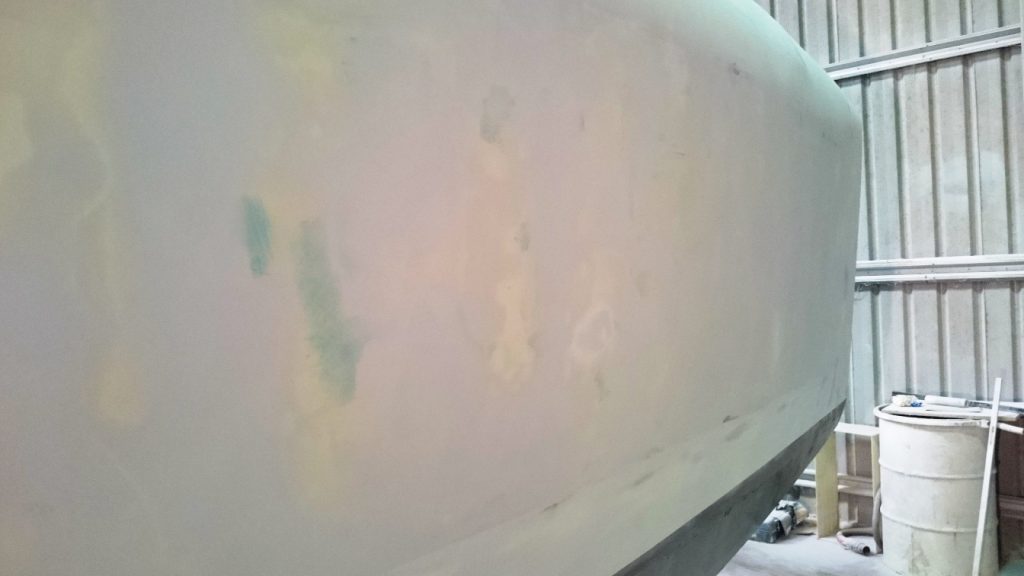 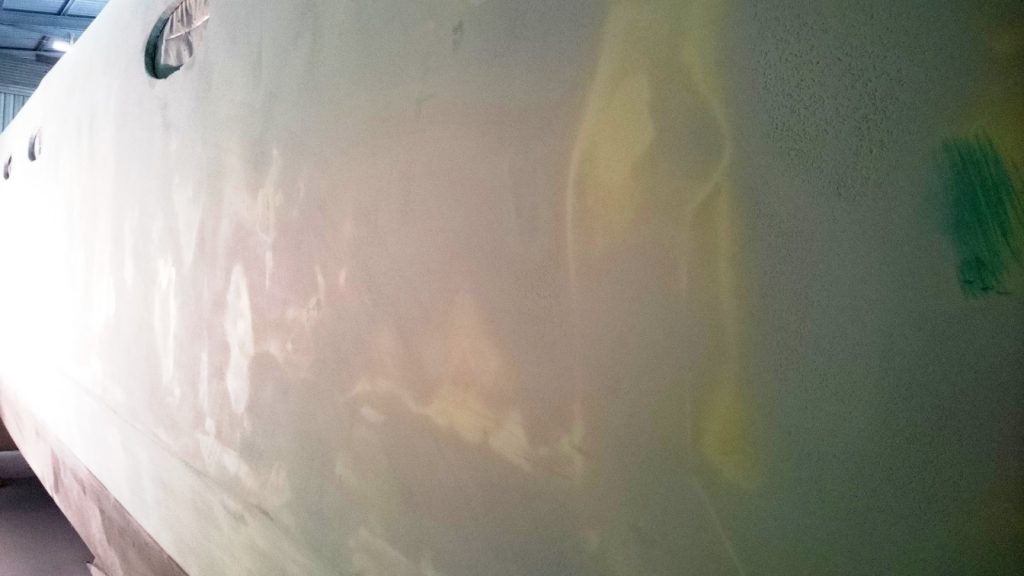 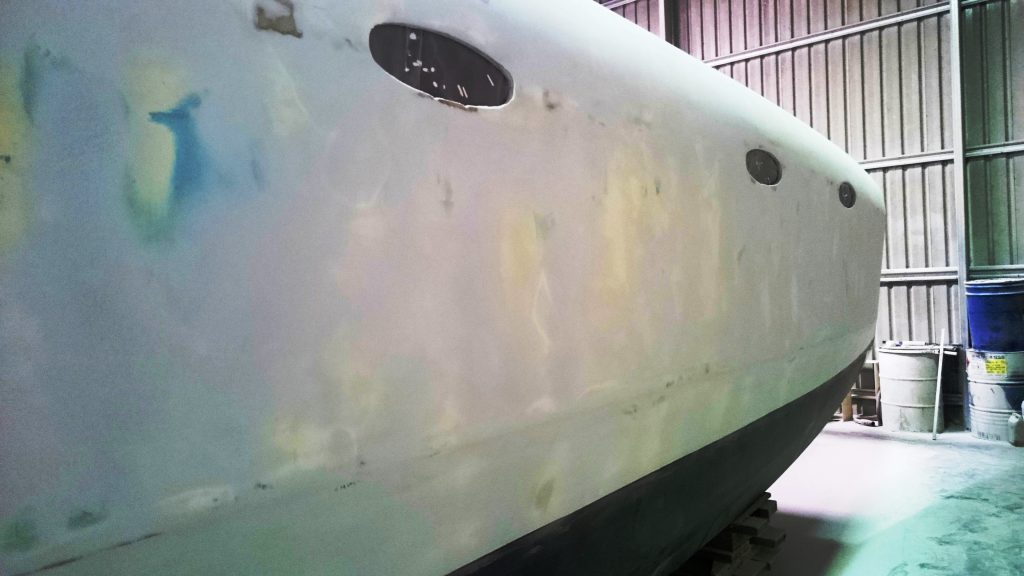 Having said that, I am still very glad I bought the microsurfacer the difference in what I thought was quite fair before to what it is like now is incredible. And in reality, it wasnt very fair at all before. So those pics of the microsurfacer on prior to sanding are very deceiving. So the microsurfacer saved me many coats and recoats of the much thinner Jotun to arrive at about the same place, or at least I will know if that is true after I apply the Jotun and sand it back. If as I suspect I am now quite close to fair and it sands evenly without breaking through in too many places the net result will be a saving of some weeks in sanding.

The other contentious idea was how Terry and I applied it. We rolled it on with thicker rollers (the foam didnt hold much highbuild) and that left a somewhat deeper stipple than otherwise. Had I sanded while soft it might not have seemed as big a problem as it seemed to become (I say seemed because in the end it wasnt a problem, I am just having another whinge about fairing!) because of the need to sand through the stipple first before you actually start fairing. Turned out to be a blessing in disguise, albeit a somewhat labor intensive blessing. 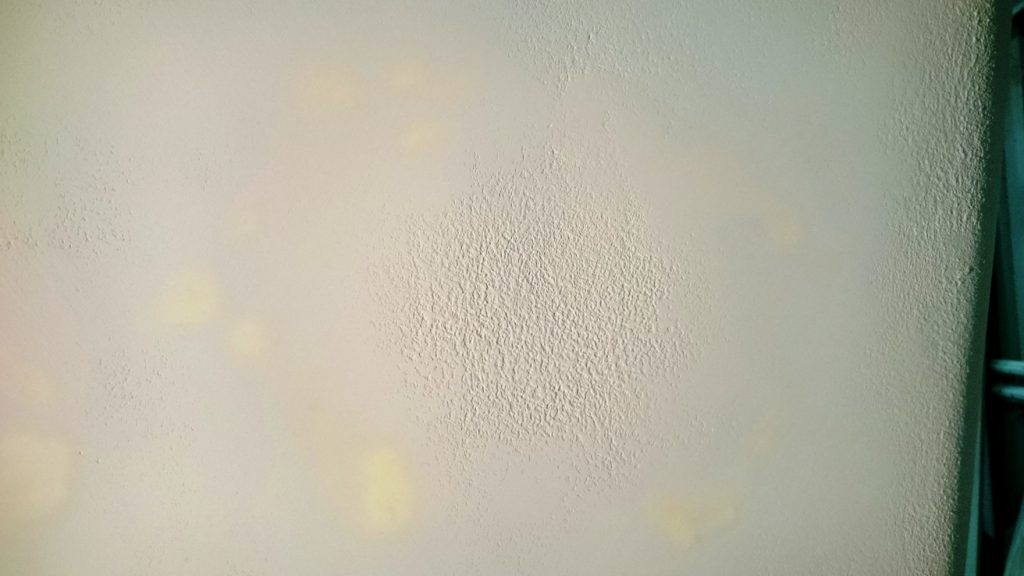 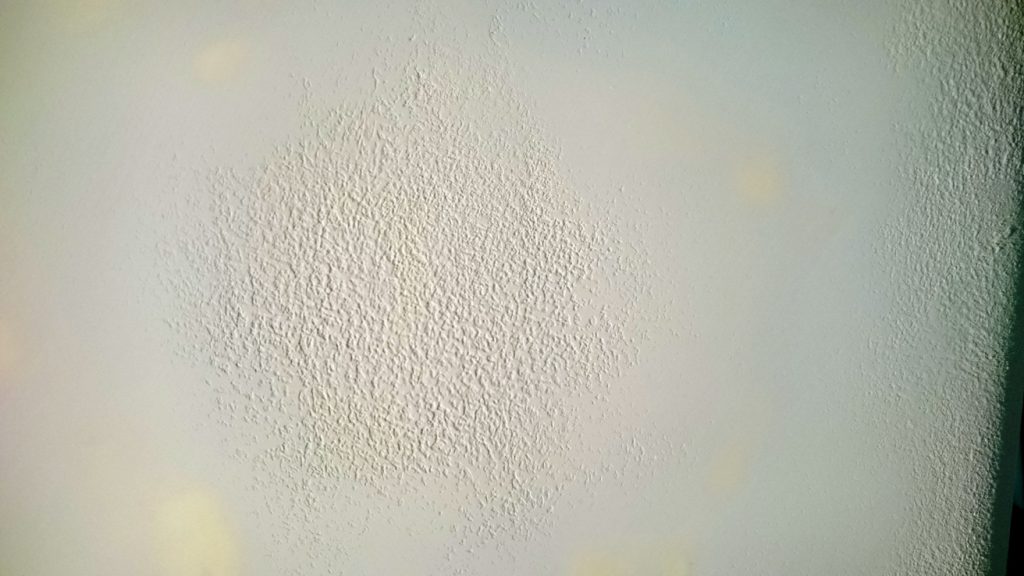 What happened is that the stipple would sand down until the surface was smooth. In places the bog below became visible before the stipple was gone. That meant keep sanding, until the stipple was gone, then I could stop and the know the surfaces were fair. Where I hit the fibreglass near the stipple it was a signal to stop of course but more importantly a big indicator of a hollow that still needed filling. Almost like the boat was telling me “fill here ya dummy!” Zoom in on the pic above for a good example of the low between the highs of the substrate. The high on the right is the join where the foam bow is attached to the hull so I knew it might end up a high spot. Pretty much gone now. 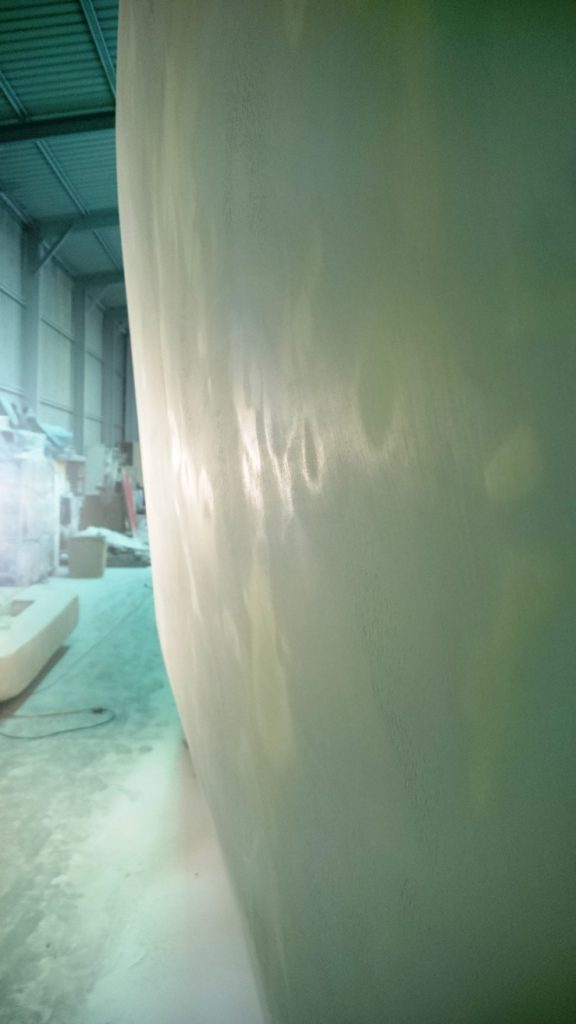 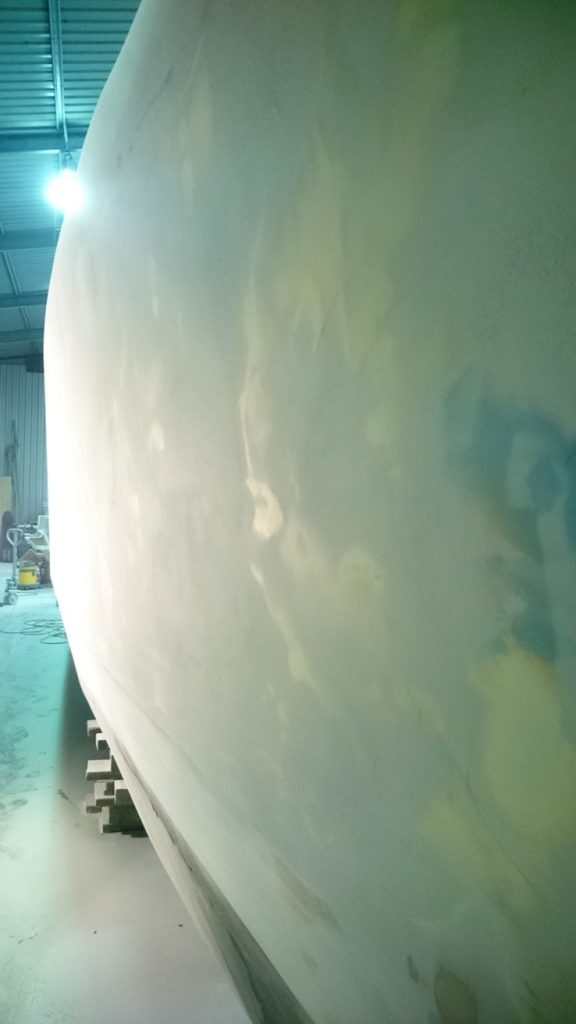 So once I had the entire hull side sanded, I backfilled with more microcurfacer just on the remaining stipple. At first I used a paint brush but about half way along the hull I decided to switch to a scraper. It worked much better and used much less material, and more importantly sanded off much easier. It took me 2 hours to resand the paint brush filled half of the hull and an hour to sand the other half. 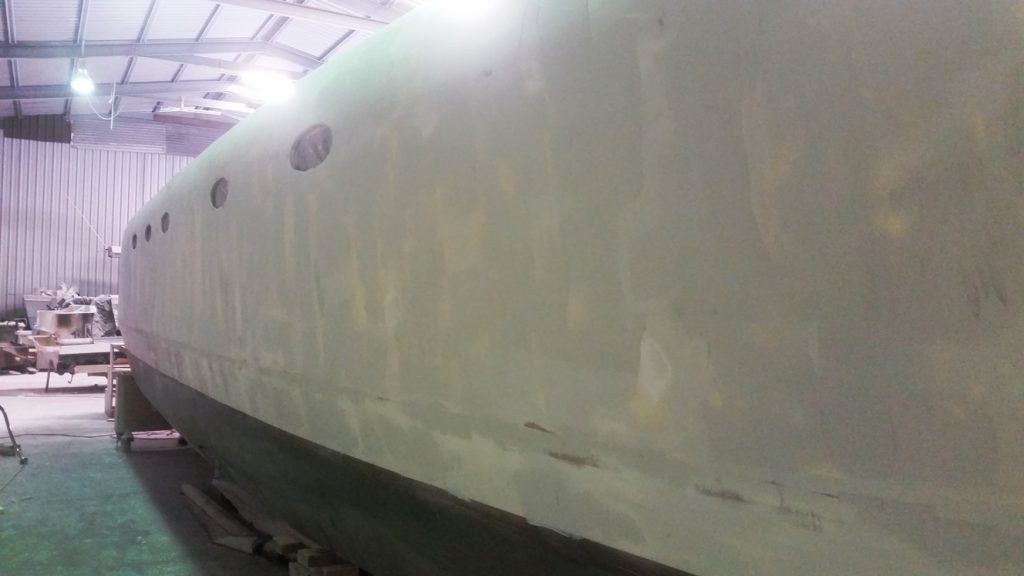 As I was sanding the curved hull to deck panel I started noticing the lines left by the notched bog trowel reappear. It goes to show how much you apply then take off again in the name of getting the boat fair. 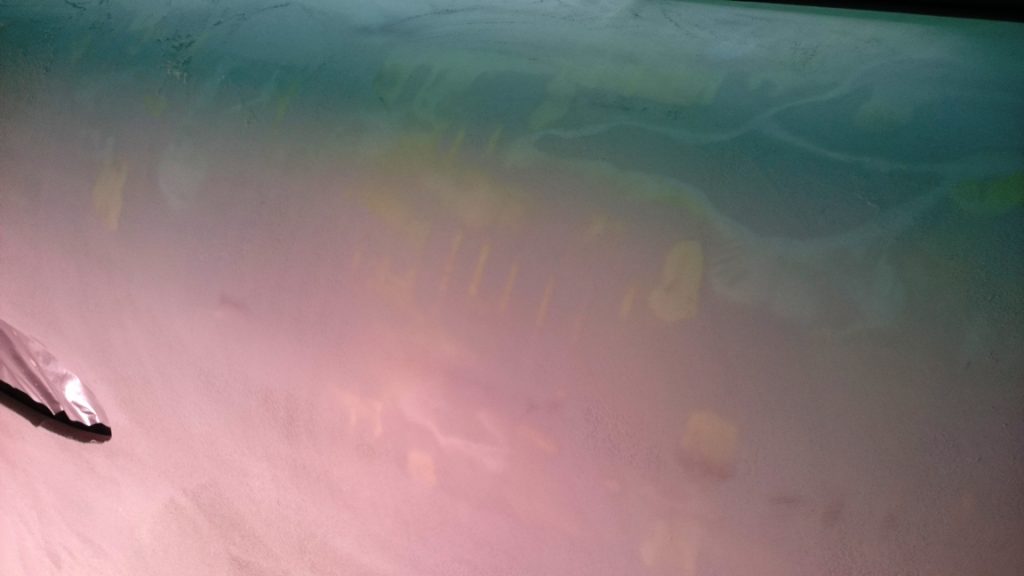 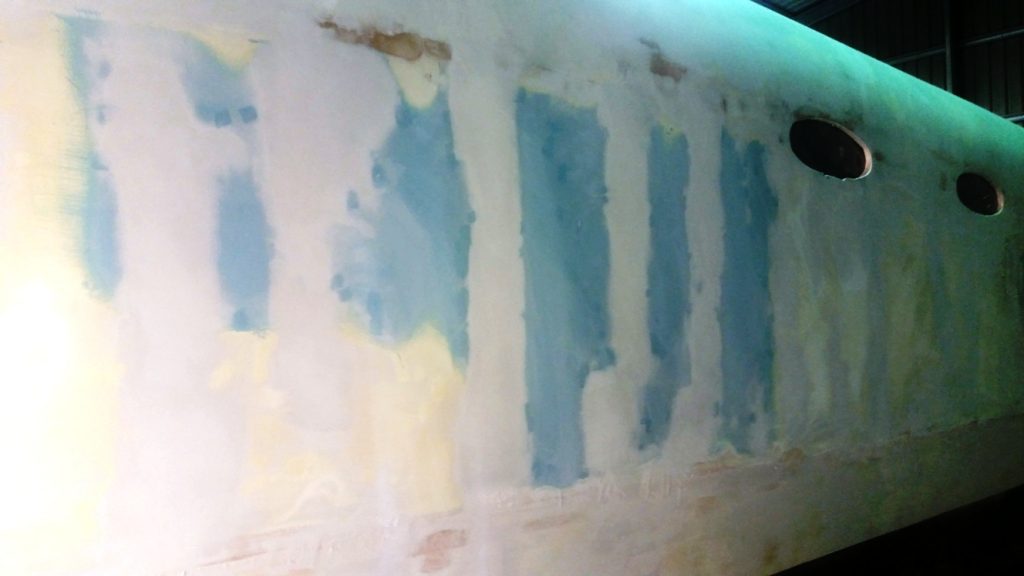 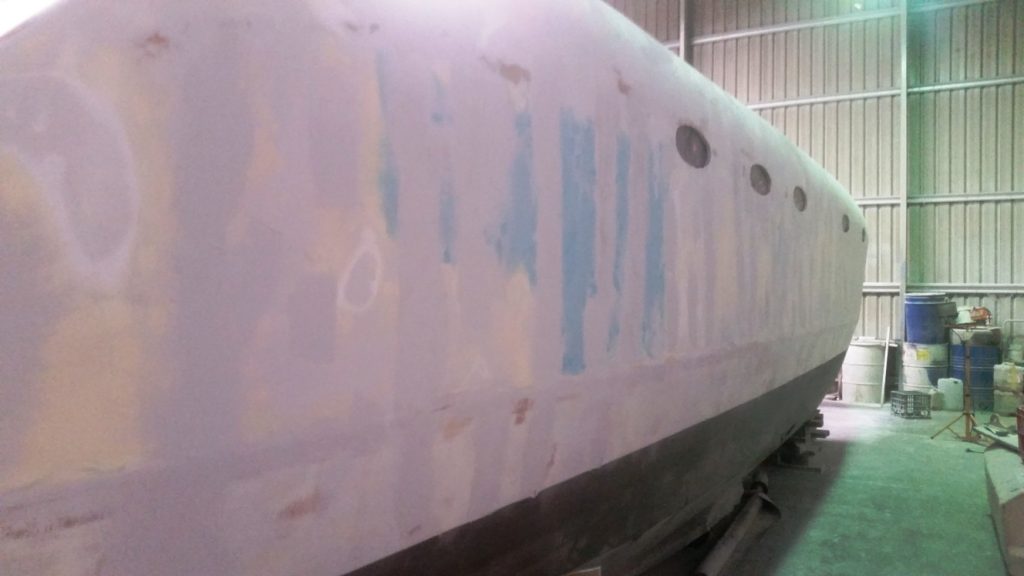 The stripes in the hull side, grey where the microsurfacer is still visible, blue of the pre mix bog I put down or yellow or even white for the different layers of bog show just how unfair the surface used to be. You couldnt see the highs and lows, just feel them if you ran your hand down the hull side. Now, when you run your hand down it is smooth. So I cant wait to get the Jotun on so the boat is one color again. 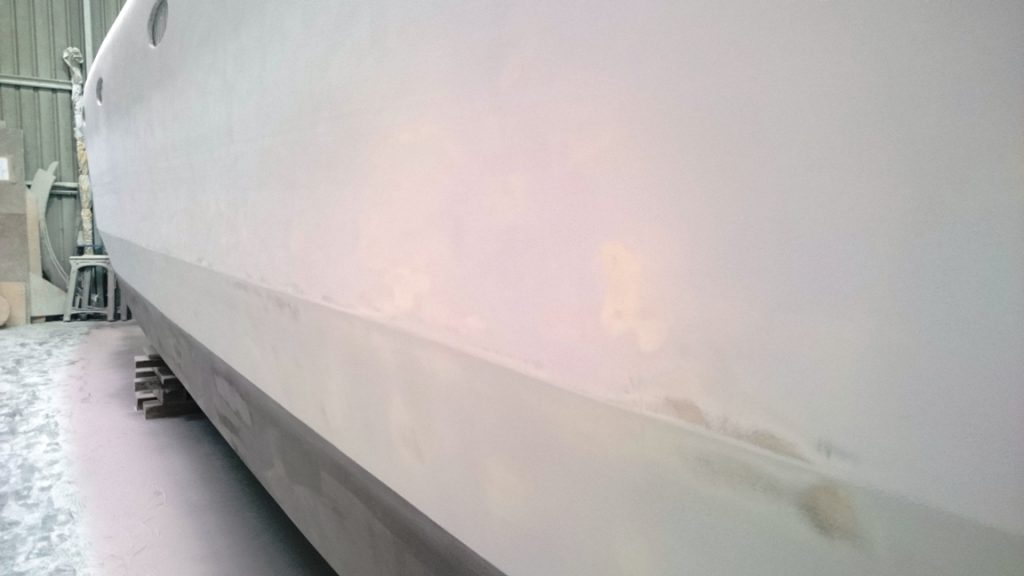 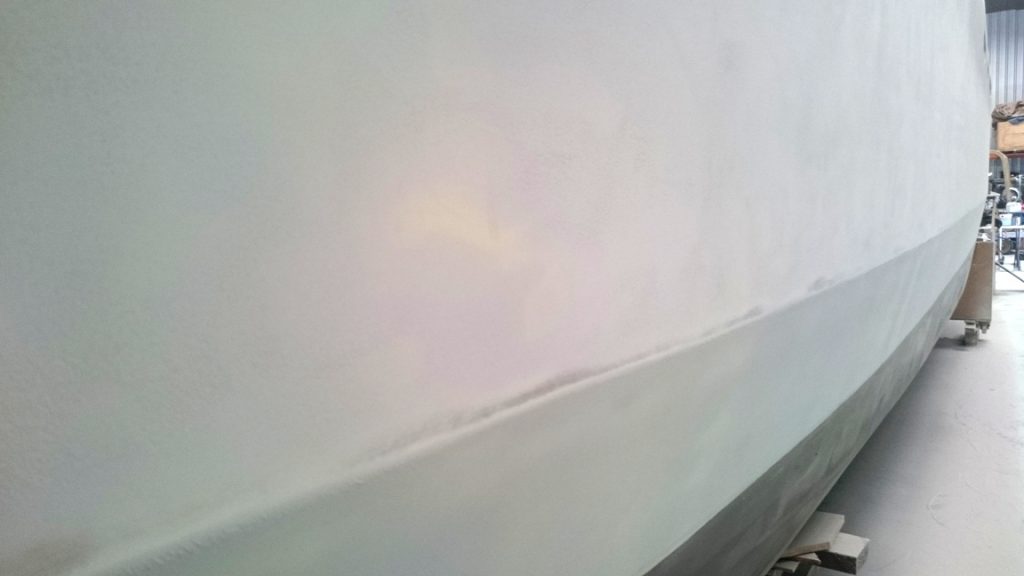 The chine is starting to look straight now. It still needs some work here and there but its getting there. A friend told me it took him quite a few goes to get his straight so I am pretty happy with them.

And one final pic, remember the hole I drilled for the steering ram over run that came out right on the edge of the step and I said it would repair easily and disappear. This repair took me 20 minutes and is goneski. 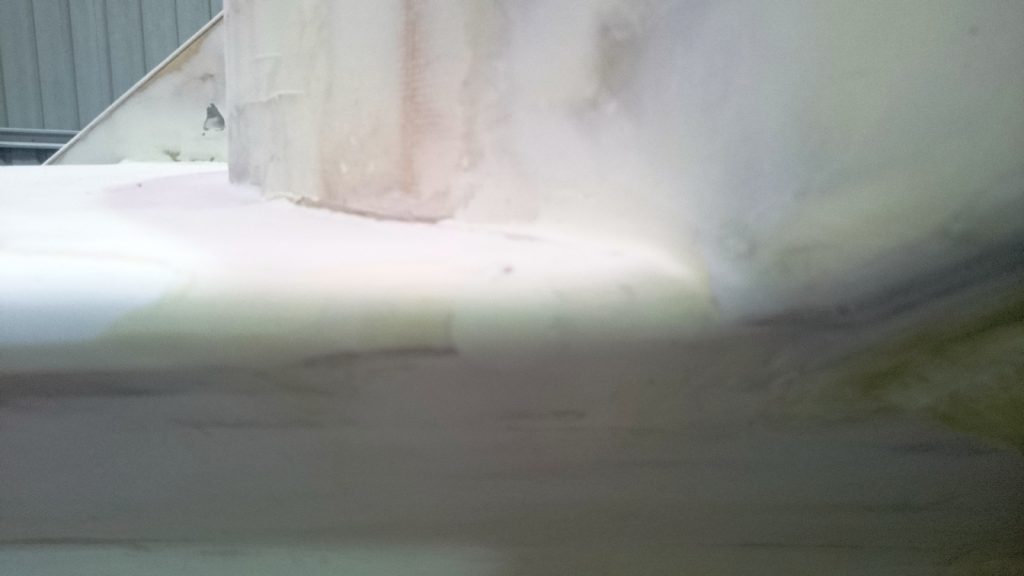 And finally this post, all that sanding gets your mind wandering on to rants about the superficiality of fairing. I am sure I have mentioned this before, but apart from the need to have a good base for the paint to adhere to so as to create a watertight seal for the boat itself, this work is all about looks. You spend an inordinate amount of time and money on making the boat look better. Why? It wont sail any better and sunsets from an ugly boat look exactly the same as they do from a stunning boat. One reason, and its rather sad that it is true, is that western society pays way too much attention to appearance. And many question the adherence to quality in the structural build if one doesnt go the whole way and “finish” the boat, in both the not yet completed sense of the word and glossy sense of the word. They bare no relationship to each other in the same way that you cannot assume that the person underneath the plastic body some surgeon has created has intelligence or morality. Many years ago there was a boat at the SC boat show, designed by Australians but built in China. It was a bit of a disaster, quite poorly finished (the design was dated so that did not help) which led me to question its seaworthiness. It was floating so I had no right to make that assumption, I did so purely on the cosmetic and aesthetic. Had I owned that boat I probably would have enjoyed the intervening years seeing the GB reef before we bleached it out of existence instead of sanding for weeks on end.

Nevertheless, I still have some weeks of this pointless sanding to go. I am falling a little behind the schedule I have set for myself. I have put a little more pressure on by my brother offering to paint in the September school holidays in about 4 weeks. I doubt I will be ready for that but I will keep trying to meet it. Back to the sanding. Cheers.

3 thoughts on “No Short Cuts”