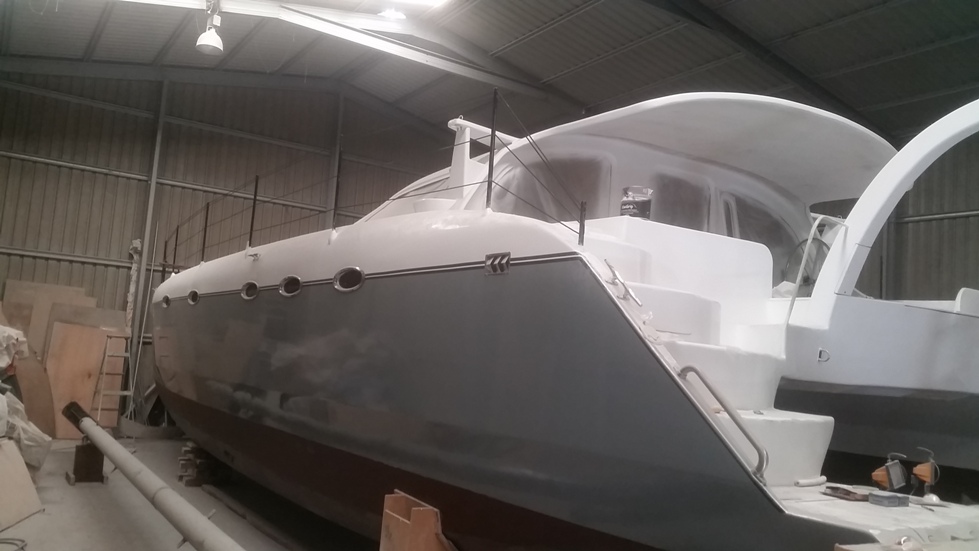 In this case it isn’t good news. Its not terrible news. Its just not good news. OK, its bad news, any update that doesnt include launch photos is now bad news. But some things have changed. But first a thank you and apology. The apology is for the delay in updating this blog. Its a combination of lack of time, lack of what I thought was meaningful updates, and the longer it went the harder it got to put something up and finally I am having server problems again and cannot upload pics until its fixed. So for now, text only.

I have had many emails from well wishers wondering what is going on. Have I launched? Believe me, there is no way you wont be informed when I do. I have typed millions of words and posted thousands of photos over the years not to. And I owe it to long time readers that want closure I guess. So thank you so much to all the well wishers, I am fit and healthy but yet another life change has slowed progress to a near standstill and is likely to create yet another change in plans as I will explain.

Recall the point of all of this was not so much to build a boat, although I have, for the most part loved the process. It was to enjoy a cruising life for a while. And having an employer kinda puts a crimp in that plan. Having no savings does too. So its all very well owning a boat but to get away you either need a portable income (such as we had when we ran our own business) or enough savings to sustain the cruising life for a while.

I have a few plans but for now, I need to have employment. For many years after the business closed I was barely paying the rent on the shed and progress was very much paycheck to paycheck. My part time job stacking shelves at a supermarket just wasn’t cutting it. It allowed me to tread water for a while but I wasn’t able to get out from under. I had debts that had accrued during that time that were not being paid down and I couldn’t see how I would be able to pay the final few big ticket costs to finish and launch. In fact launch itself is many thousands of dollars. Probably well over $5k and closer to $10k by the time I have paid for the shed side to come off, the truck and its associated costs, shed clean up etc.

The solution was get a better paying job. There was no other way. So for the past year and a half that is what I was trying to do. But at 55 and with no real qualifications (and a big hole in my resume during the 17 years of self employment), there are not too many well paying or well enough paying jobs that would not have meant spending money I didn’t have re-training to do something for not too many more years after that training. But I managed to find a decent job that did not require me to pay for a re-traing. It pays fairly well. Problem is its long hours (when travel to and from is factored in) and its 5-6 days a week (supermarket was 3 days a week). Which hasn’t left much time for working on the boat. I have made a little progress, but emphasis is on little there, not progress.

I am working as a station attendant on Sydney Trains and I love it. Its a great job that brings me much greater job satisfaction than stacking shelves did. And the pay is about 40% better per hour. I was part time at the supermarket and I am part time for now on the Trains, however because its an hour each way, its not worth staying part time because of the commute time. Fortunately there is heaps and heaps of overtime, which I have taken pretty much every extra shift offered. It has helped me get my debts repaid and save for these last few big ticket items. It has also bought on a change of longer term plans.

Whilst finishing the boat is a priority in and of itself, if for no other reason that the satisfaction of finishing something I started so long ago, but Jo and I want to enjoy using it. Even if its just for annual holidays for a while. And launching it is also part of the financial plan, albeit not fully completed, just to get out of the shed and stop paying rent. The rest of the plan is to save as much money as we can as fast as we can to pay out our mortgage so that we could put a tenant in our house to pay us a modest income while we go cruising. We figure with both of us working we could possibly pay out our mortgage in between 5 and 10 years. If it took the full 10 years then I would get tax free access to my superannuation and combined with rental income we figure we could comfortably cruise. And if you think planning to pay a mortgage for a goal 10 years from now is too long off, go back and check how long ago I started building! In the meantime we get annual holidays cruising part time.

And as if fate didn’t have another spanner or 2 to throw at me, my car engine expired on the freeway on my way to work about a month ago. Luckily I already had some savings (that I was saving for the windows, so two steps forward one step back!), so I was able to buy myself another car. We knew that the car I had was on its last legs but it would have been good if I could have wrung 6 more months out of it. But alas it wasn’t to be, so I organised a tow to the nearest wreckers and got $200 for parts for it and bought a 2008 Suzuki SX4 for $4000k. I had saved it up to go toward the windows and launch, but as if I haven’t been back to zero bank balance before!

So the little progress I have made has been hard to describe in pictures. I have finished some of the wiring that is needed for launch, I still have some to do. I have dry fitted the trampolines. I need to remove them now that I have them sized correctly and make more professional looking edging for them before finally tying them into place. I have fit the lifelines to the stanchions. Lots of little jobs. I still have a million of them to do. And 2 major works to get done or to pay someone to do. Which is an option now. I have a guy working on my outboards that will fit them and my hydraulic steering for me, and I still need to have my windows made and fitted. They are the only 2 things holding launch up, that and actually booking and paying for launch. I still haven’t saved all of that money yet but am working on it.

The tramps took a few fittings. Mostly because it stretches a little and needs to be fairly taught. My tramps are home made from netting and fibreglass rods (and eventually canvas edging to cover over the edges of the nets woven to itself over the rod to give them a more professional look.). Now that I finally have them to size I just need to remove them one last time and fit the edging material over them and they are done. I was given the fibreglass rods but had I needed to buy them they were about $10 each x 8 so $80, the net cost me $180 and the parachute cord about $20. I spent $200 for them. Not bad and they look pretty good I think. 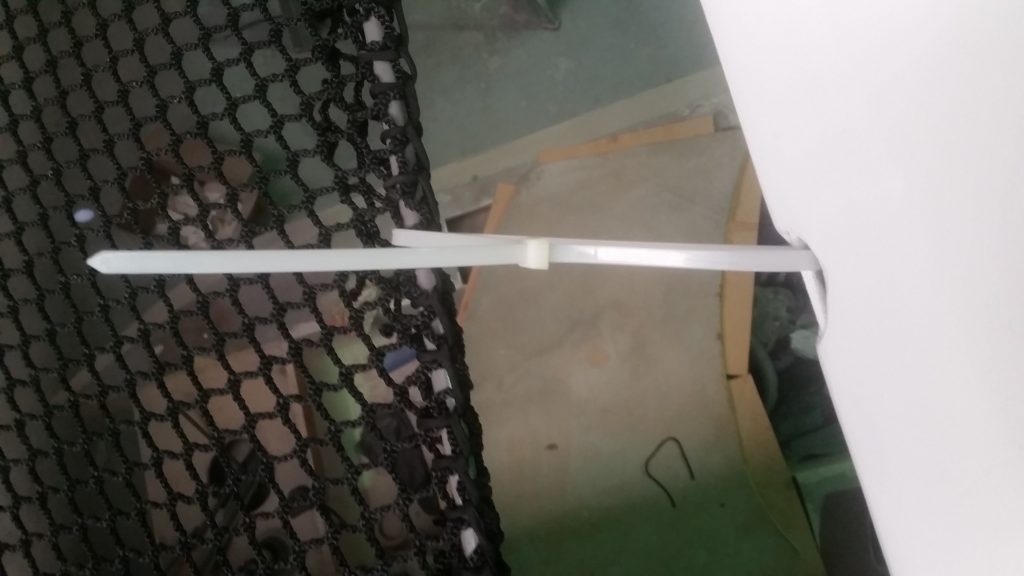 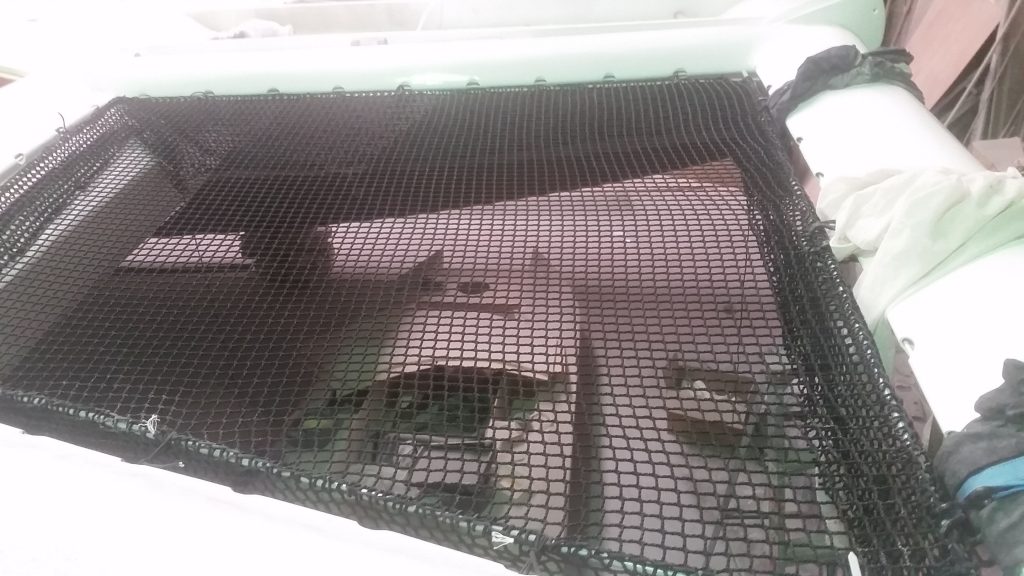 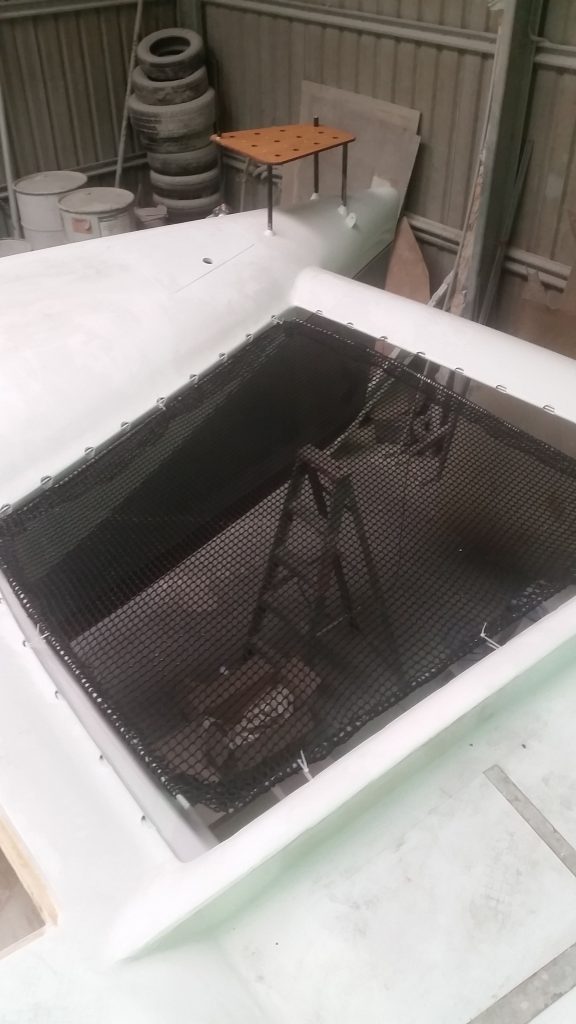 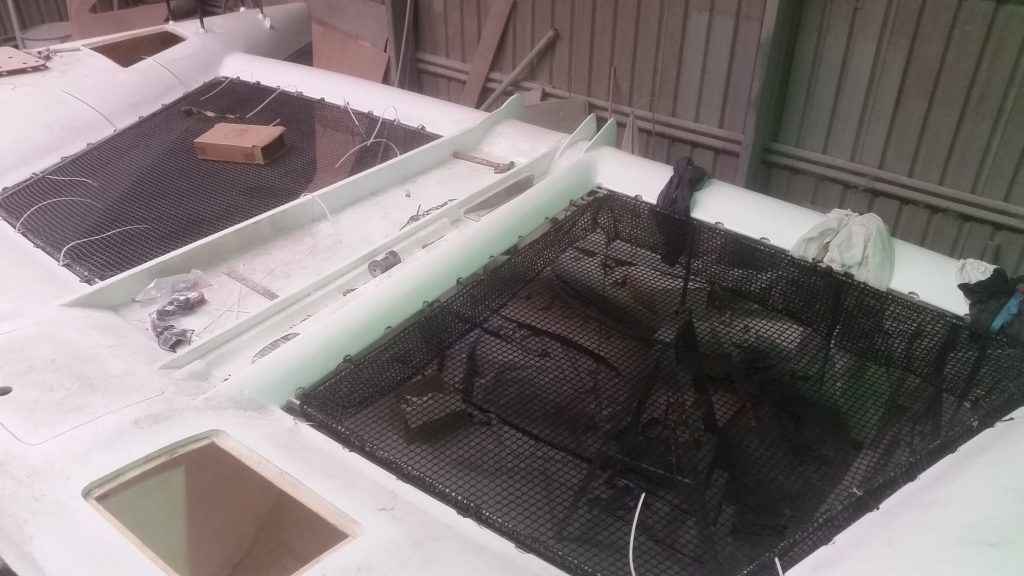 I decided some time ago that with home made stanchions I would opt for home made lifelines. Instead of stainless steel wire, I bought a 100m reel of 6mm uv stable black rope (spectra or dyneema) not sure which it is, but it has a certified breaking strain of 800kg which is about the same as stainless wire. The advantages besides being cheaper is I don’t need turnbuckles and can tension it by stretching it as I tie it off, it is softer to hold on to being about double the diameter, its lighter and finally I think it looks better. 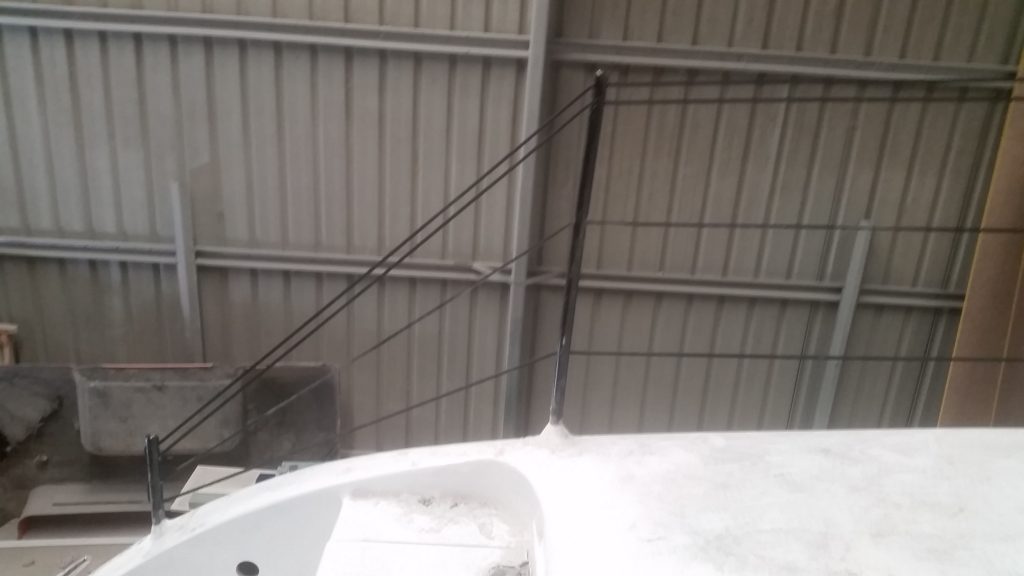 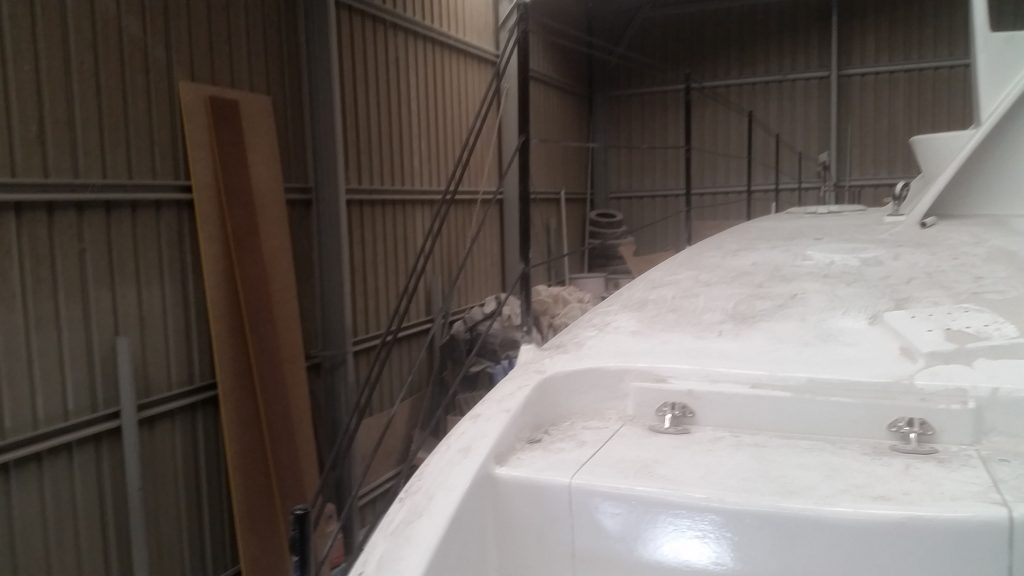 The sharp eyed among you may have noticed the can in the pic above (this one loaded the rest wont for some reason). Its a can if kiwigrip. Its roll on non skid paint that has a special roller that creates the grip in the stipple. I have 3 cans which hopefully is enough to do the entire boat (a not so aggressive stipple gets you about 10sq meters per litre, each can is 4 litres so I have 120sq meters cover) so next job is masking up for the non slip. Long laborious job.

I have paid for and registered the boat and got personalised registration. In NSW all boat registrations end in N, I had no choice on that but could choose any letters or numbers so long as I used 6 of them. So our rego number is YIKES1N. When I eventually register the dingy it will be YIKES2N. I have also started the application process for a swing mooring opposite our house on Lake Macquarie. Hopefully that gets approved soon. With that, all will be ready for launch, when I finally get these last few things done. More than another boat unit ($1000) to do all that but at least the ongoing annual fee is less than half of that. One day I will probably need Australian registration too, and that I believe is also a couple of grand. Harsh. 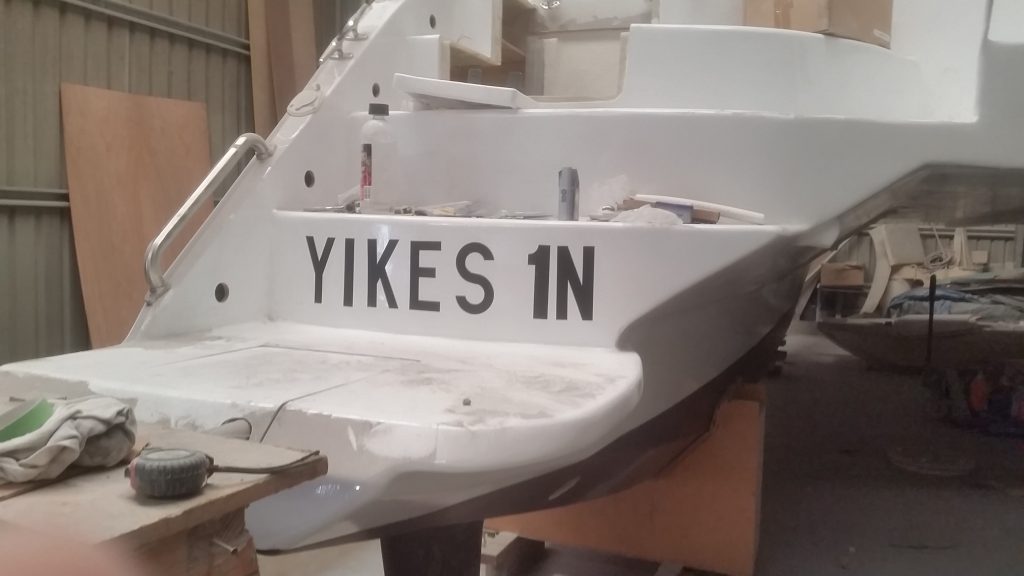 So hopefully in a couple of months I will post again with pics of the windows fitted. That should be the last post before the actual launch post. Hopefully. So please be a little more patient with me and hopefully (there’s that word again, hopefully) we launch soon.