More work on shower and bathroom

The shower is almost finished, the base is in, the black tank is ready to glass in so next will be a panel made to cover over it and then the shower back with doorway through to the laundry can go in. I have all of my through hulls on the port hull in the shower sump so should one of them fail and leak the ocean into my boat, the worst that can happen is that the sump will fill with water and stop the ingress but before that the sump pump would kick in and if it can handle the amount of water coming in it would just recycle it back overboard. For when we are away from the boat there would just be one further precaution required, that is to fit a plug into the shower drain pipe inside the sump as it is the only point below the waterline that drains directly into the sump that would allow water building inside the sump to get into the boat. The easiest way to do this is to simply plug the outlet from the shower inside the sump and remove it when back on board. Very simple precaution. Otherwise as I said the worst that could possibly happen is to flood the sump with about 50 litres of water that cannot go any further into the boat.

When onboard the shower drain pipe that drains into the sump (that will be plugged when not on board), will have a stocking held over it to catch body hair that would otherwise reach the sump pump and make servicing it more regular. There will be another drain pipe into the sump but it will be from the vanity which is way above waterline so wont need to be plugged, it will however also have a stocking over it to also catch hair. There will also be a drain from the kitchen sink and dishwasher that will also drain to that pipe but will divert directly overboard and only to through the sump if we are in a place that will not allow even kitchen sink water to pass overboard. This will be tapped via a Y tap so it goes directly overboard or into the sump but I would only send it to the sump in an extreme emergency as I do not want to have to filter out foodscraps from the sump as they start to smell very fast. Having said that, the stocking would certainly do that, but would just mean that it would need to be emptied and cleaned daily. All doable but of course where I can I would much prefer to send kitchen waste water directly overboard. As far as I know it is still allowed in all but the most sensitive areas, perhaps the Great Barrier reef marine park for example. 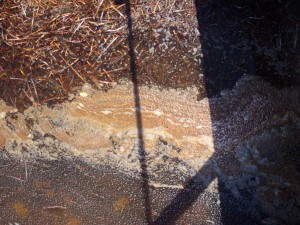 One of the through hulls in this sump is the data transducer (triducer, speed wheel, temp and depth). As I have mentioned previously, this transducer needs to be removed from time to time to clear the wheel of any blockage or growth to ensure accurate readings. This is done when the boat is floating, by quickly removing the transducer from inside the boat, and replacing it as fast as can be done with a blank that reseals the hole now in the bottom of the boat and gushing the ocean in, until you repeat the process in reverse to replace it. There is a plastic flap that is supposed to somewhat inhibit the ingress of the ocean by flipping over to block the hole but I can imagine that the few seconds that it takes to switch the plugs around would be highly stressful and you want that job to be in as accessible a point as is possible. I forgot this small fact when cutting the original through hull. So that with the lid open of the shower sump the transducer ended up being out of sight toward the front of the sump and not directly under the opening. I thought this was a good idea at the time, keeping the wiring out of the way. Until I remembered this little job.

There was going to be one extra through hull further back in the boat as a pickup point for saltwater, for the watermaker, the deckwash and as an option for the toilet to use salt water if fresh water is light on. I wanted it some way away from the combined black and grey outlet through hull. You dont want any dirty water anywhere near the clean salt water intake when making drinking water. But as I now had a through hull in the sump I didnt want to use for the transducer, having decided it would be much better relocated to directly under the middle of the sump lid, I have no choice but to use that through hull as my salt water intake point. There will just be a firm rule that whenever the water maker is switched on, the black water seacock must be shut. Its no biggie and does offer the piece of mind of once again having all the port side through hulls back in the sump. And now the transducer is in the middle of the opening so as to make cleaning it as easy a task as opening a hole in your boat, however short-lived, can be.

While on the subject of black water overboard, the block of flats next door had an issue with their plumbing at the time I checked on the pureseal plates last month. They must have an emergency outfall for their septic tank because this is what was floating under the pier along the shoreline (see picture above). I find it ironic that emergency or not, some 20 houses can have their sewerage fall into our bay, and in many places along our coast the public works sends sewerage into the ocean via pipes that until as recent as 20 years ago were only meters off the beaches but are at least now 1000’s of meters offshore, but nevertheless the point is still valid, that when millions of people need sewerage pumped into the ocean that is fine, but when a liveaboard boater whats to do so it is highly offensive to all and sundry.