I didn’t get to do any more work on the dingy today but I did do more on the beam. I coved and taped the web in place and glued a stringer to it, ready to glue the top on. Before I do that I will attach 2 stainless steel u-bolts that will be the anchor bridle points.

I bought the u-bolts today. It was the first spending I have done for the boat in over 6 months except for the odd consumable (drill bits, sand paper, etc). The last boat purchase was the highbuild I think. I could have bought galvanized u-bolts the same size (boat trailer winch bolts) for a third of the price but opted for stainless steel because it is so much stronger than galv steel and the constant rubbing of rope against the eyes would probably wear the coating away on the galv where as stainless is not a coating and is stainless all the way through. In the end our boat will be held by these 2 bolts so the stronger the better! 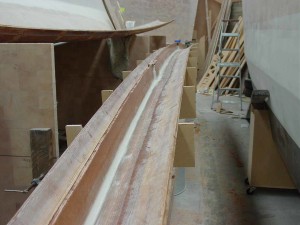 The tapes (100mm double bias) for the web were applied directly to wet coving and wet out manually (paint brush) in the same way I have for the other glass in the beam, by rolling out a couple of meters, wetting out and rolling out a couple more. The coving was also applied in the usual way, by spreading the filler along the join with a rounded spatula. 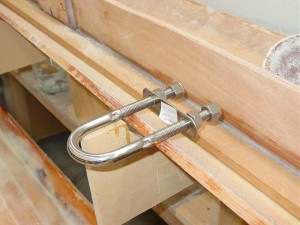 After I had attached tapes to both sides of the web and resin coated the rest of the ply to seal it, I smeared thick glue along the top of the ply and attached a cedar strip along it and screwed it down. I then smeared the excess glue that was squeezed out into a cove along both sides of the join with my finger. When this is set (tomorrow) I will remove the screws and then all I have to do before gluing the top of the beam to the bottom will be to attach the 2 stainless steel anchor eyes. I will build a timber pad for each and glass them into the beam and drill out the holes from which the eyes will exit the beam so that the 2 halves still meet cleanly for gluing.

Then I will glue it together. Maybe I will also get a little more done to the dingy.