I made up for a little lost time yesterday even though I only put in 2 hours today. I have now got most of the planks on, and should be able to get the rest on tomorrow. Then I can start on levelling the planks and gluing them to each other. I am doing a much neater job on this hull, which is not surprising, you get better at most things second time around. I have decided not to taper every plank as they get to the bow, deciding instead to only taper the planks that actually need to be trimmed to shape to fit into the narrowing spaces at the extremes of the hull. This has resulted in a neater job overall.

Once I have all of the planks on, I will need to shape the stern at the last bulkhead and besides making sure all the lines flow correctly I also have to ensure that the 2 hulls are the same shape at the stern. 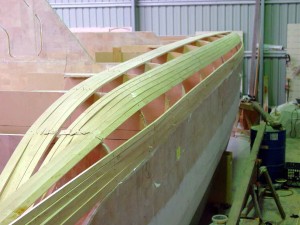 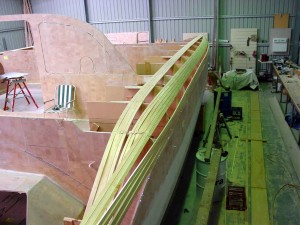 It was hot again today so after 2 hours I went home for a swim, but I think there is a cool change coming which will make gluing a bit easier, as I get a longer pot life. I think I can have the planks glued by the weekend, and perhaps be ready to glass the outside.