After much consternation about getting the hulls as perfectly positioned as I could I have today finally joined them by gluing in BH7 the most rear spanning bulkhead and the back of the cockpit. In the end I decided that I was checking all of the levels as my procrastinating that I do before any major item. I put it off as long as I can justify out of fear of getting it wrong, when in the end was unjustified, because it always goes easily and I always worry far more than the difficulty warranted.

Anyway its done. They say you should celebrate major milestones such as turning the first hull and joining the hulls together for the first time. I didn’t have any wine or beer in the fridge, but I did have grapes. Close enough! 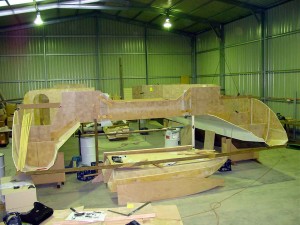 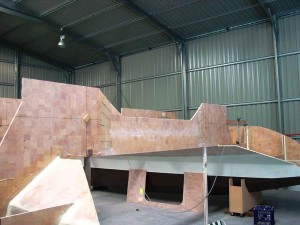 I also glued the slots in the edges of the next bulkheads for joining, the ones I cut a slot in to form the tape trough. The rear bulkhead will have furniture on the front and I plan a raised duckboard on the rear so most of it will be hidden so I didn’t bother with this cut on the rear bulkhead. I also only cut it into one side of bulkhead 4 as the front is hidden inside the curved section of the bridgedeck inside anchor lockers etc, the rear of that bulkhead is inside the bedrooms so I have done these. The same is true of bulkhead 5 the front join is visible in the bedrooms but the rear face is hidden inside the lounge suit and kitchen cupboards so again I only cut one slot. The only bulkhead visible from both sides is the one with the door in it (bulkhead 6) so I cut 2 slots in these edges. I have to wait until tomorrow for them to dry. I waited a while to see if I could get a second bulkhead glued in today but they were still tacky and I don’t want to let the pressure off the joins until they are set so at 4.30 I went home.