The roof has been released from the mold but I am yet to turn it over. It took me over an hour to release the roof. Many of the screws just refused to come out, a combination of resin in the heads (or under glass) or trying to reuse screws with damaged heads meant that I just completely stripped the head so I had to dig them out and remove them like a nail using pliers or hammer. To make life a little easier I removed the mdf shaping forms I had placed around the front curves of the roof so that I could get a lever under the roof to lift it. I had only left screws around the edges or so I thought. Once I had removed these screws around the edges I expected to be able to lift the roof off the mold, I had put clear packing tape on each frame so that glue would not stick to it.

So I was at a loss as to why I could not lift the roof off the frame. In the end it took brute force to just lift it off, it was being held down by a couple of screws I had missed, one on each side about the middle of the roof. As I pulled the roof before it let go, it would creak and groan and I was scared to pull it up hard because I was scared it would break. I even climbed in under it to see if I could see where it was binding but I couldn’t get enough purchase to move the roof to get a better idea of where the screws were from under there so I just gave it a few pulls and off it came. I pulled the screws out of the mold rather than through the roof, so when I turn the roof over I will have to pull them through the roof before glassing the inside. 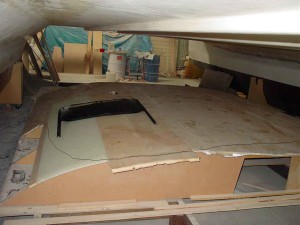 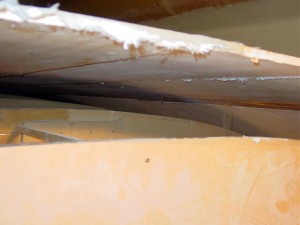 With the roof free I just have to lift it off and out from under the boat. I am waiting to see if the guys will be moving 9 Lives over soon so I have more space between our boats but if not soon then I will just have to work with the space there is. Just to get an idea of what shape the roof will take when cut down to size once on the boat. I have drawn a rough line where the rear of the roof will curve to match the cockpit seat shape (it must be trimmed to the seat shape so that you can step into the boat all around without hitting your head on the roof edge) and where the sunroofs will be placed, one above the helm and the other at the same distance in and back as the helm roof. I will need to build a box for the sunroof to compensate for the curve in the roof. I will also build a box for solar panels between the sunroofs.

Once I had released the roof I got started on making water tanks. My tanks are in the space between the 2 forward bedrooms. The plans make provision for 2 200 litre water tanks and 2 100 litre fuel tanks but as I will not be having fuel tanks (I will have outboards with 24 litre portable tanks rather than a fixed tank) so I will have space for 2 300 litre tanks. But these must be fitted before the cabin wrap around goes on and the dashboard is glued down.

I am still not entirely convinced that making my own tanks will work as I am not sure if I can make them without an taste to the water, I am still working on what to line the tank with to be sure it is taste free and well sealed. I will make a tank up and test it and if it works well then I will make another. I started today by cutting tank sides out of nidacore, cutting glass for each side, peel ply for each side and glassing the sheets both sides. 2 of 600mm x 1000mm sides and 2 of 500mm x 1000mm sides (300 litres).

Once these were glassed both sides with peel ply on I left them to set on the flat bench and got on and did some more taping inside the boat. There are still a number of areas inside the foredecks that are still to be taped so I do them whenever I have some free time.